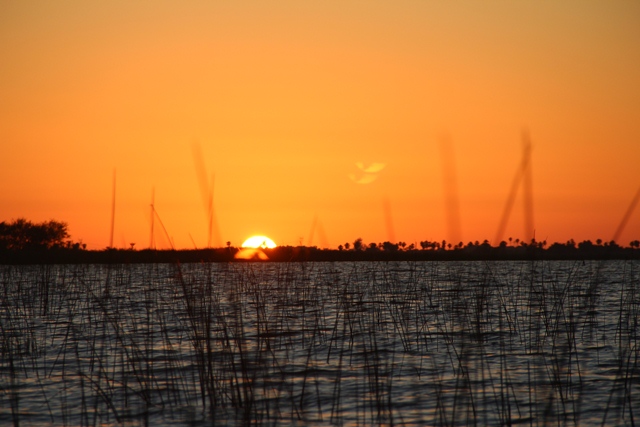 Leaving Mendoza with a significant supply of quality Malbec and Cabernet Sauvignon, we started our journey north-east towards Brazil. We had decided to alter our itinerary slightly and so would be heading up to Iguazu Falls via the Reserva Esteros del Ibera, a wetlands reserve which would give us our first chance to see caiman and capybara, two more of the unique South American wildlife species.

Good, fast motorway saw us eating up the kilometres through the flat, hot centre of Argentina. A journey of 36,000km must necessarily involve some long travel days, but it isn’t like being in a car. There is plenty of space on the truck to move around, and travel days are a great chance for everyone to have a chat, catch up on sorting out photos, play cards, read a book, have a snooze or simply watch the world go by outside the windows and get lost in their own thoughts. Our first day saw us almost perpetually driving towards a storm (perhaps because Pete had mentioned we may be bushcamping?), which fortunately stayed in front of us and left us alone. Evidence of its recent presence was everywhere, with huge puddles of water alongside the road, and a rather slippery entrance into the campsite which Ithaca handled with ease, although it would be fair to say that we definitely left our mark (in the form of rather deep tyre tracks in the mud!)

The following day, the sun was back much to everyone’s delight and we hit the road. Our journey took us through a 2.4km long tunnel at Parana under the Rio Parana, the second largest river in South America which flows past Iguazu Falls and finishes in Buenos Aires.  We found a lovely campsite on the banks of a river (much to Duncan’s delight), a stunning sunset was our reward, even if we were sharing the campsite with quite a few bugs!

The final part of our drive to the nature reserve saw us enter the wetlands area of central Argentina, recent rains ensuring high water levels which made the scenery even more impressive – bright blue sky, lush green fields with shimmering water, and cattle and horses often up to chest deep in the water, staying cool and munching contentedly.  Simple houses, gauchos (cowboys) in traditional dress, small towns – the sights of rural Argentina.

Thanks to a washed out bridge, our journey was slightly extended as the road was closed so we had to retrace our path for 35km or so, but soon we were back on track and enjoying the new tar road…  until it ended and we hit a very bumpy dirt road (although it was nothing compared with the road on the other side of the reserve, but that’s another story for later!).

Our campsite in the nature reserve was beautiful, right on the edge of the river with lush grassy areas to pitch tents or just lie in the shade and read a book and a great barbeque which we made use of with a cook-your-own steak night.  But apart from the lovely campsite, our reason for visiting was to experience the great variety of wildlife that lives in the reserve.  Boat trips and night walks gave us all plenty of chance to see capybara, armadillo, caiman, southern screamers, jacanas, cormorants, herons and woodpeckers (even Tony managed to see some of the woodpeckers, finally!).  Mikkel decided to get up close and personal with the wildlife, scrambling up onto the roof of one of the huts in the campsite to retrieve a snake which (probably) wasn’t poisonous, although poisonous or not, Kirsten wasn’t keen to get too close to it!

After a relaxing couple of days in the reserve we hit the road again, heading north.  Bumpy doesn’t begin to explain the condition of the road, we were very grateful that it had not rained for a couple of days or we would have almost certainly been pushing and sand matting the truck along the road at some stage!

In the 1600’s, the Jesuit order started a number of missions in South America, and we had the chance to visit two of these missions.  The first, Santa Ana, is in a more ruinous state, but gave us a bit of an introduction to the layout of the missions and the background to them.  The second mission we visited was the best preserved of the missions, San Ignacio Mini, which at one time was home to 4,000 Guarani people and 2 priests.  An excellent guided tour put the ruins into context – the missions were established to both protect the local Guarani tribes people from being enslaved by the Spanish and Portuguese settlers, and also to convert them to Catholicism.

It was a great morning of history and beautiful ruins against the background of a(nother) stunning blue sky!  Although for some of the group it wasn’t such a sunny morning having discovered caiprinhas, a traditionally Brazilian cocktail!  But it was a lot of fun at the time!

Our final stop in Argentina would be Puerto Iguazu where we would be seeing Iguazu Falls from the Argentinian side before crossing into Brazil to see them again from the Brazilian side.  After having travelled around Argentina and Chile for 49 days, it was time to reflect on everything we had done and seen in our time there – too much has happened, been seen and experienced by each person in the group to list it all here, but here are just some of the highlights – glaciers, lakes, mountains, hiking, mountain biking, paragliding, white-water rafting, boat trips (including an Antarctic cruise for one of the group), waterfalls, wildlife, steak, chocolate, wine-tasting, steam trains, cocktails, volcanoes, ziplining, hot springs, caves, missions, asado (barbeque), stunning wild flowers, 1500 year old trees, crazy mountain passes and long straight roads.  We have had good roads and bad roads, been stuck in the mud, been cold, hot, wet and dry, had snow and sunshine (sometimes at the same time).  And we can’t wait to see what the next few months have in store for us!