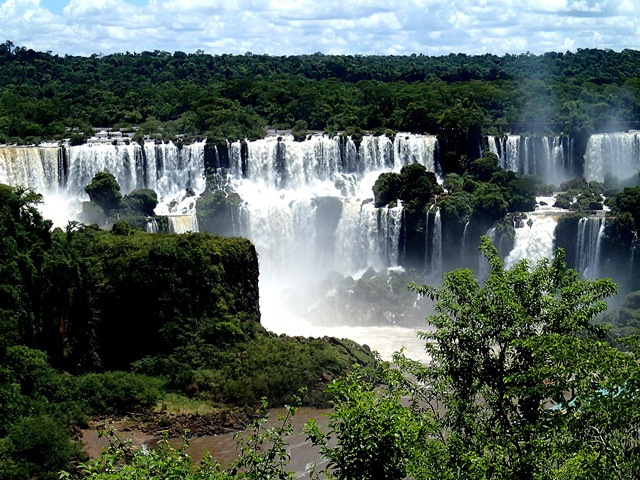 Iguazu Falls has just been voted one of the New 7 Wonders of the Natural World.  And after our time at the Falls on both the Argentinian and Brazilian sides, I think we would all agree they rightly deserve their place there!  Although not the tallest (Angel Falls in Venezuela), they are higher than Niagara Falls, and wider than Victoria Falls.  Iguazu actually consists of 275 separate waterfalls over more than 3km, but it is the sheer volume of water passing over the falls, and their stunning jungle setting that make this a very special part of the world.

On the Argentinian side of the Falls, most of the group set off early to beat the heat of the day, and the inevitable crowds.  An extensive walkway has been built which gives you the chance to stand above the falls, sometimes it feels as if you are in the falls, with the spray rising up and ensuring pretty much everything gets soaking wet.  The most spectacular part of the falls is the “Devil’s Throat” where an seemingly impossible amount of water crashes over the rocks.  Words cannot do the falls justice, so here are some of the (many) photos.

The next day we enjoyed our shortest drive day, and easiest border crossing to date, as we headed across the bridge into Brazil.  A couple of stamps and a brief Portuguese lesson (from the immigration staff) later, we were in country number 3 for this journey so far.  Immediately across the border, the change was apparent.  Not just the usual things like a change in currency (goodbye Pesos, hello Reais), and in this case a change in language (adios Spanish, bom dia Portuguese), but there was the feeling of a change in approach with Brazil appearing to be a lot more organised and developed, and undoubtedly wealthier than their southern neighbour.

Where Puerto Iguazu on the Argentinian side is a pretty small town with limited infrastructure (although it does have free wifi throughout the town), Foz do Iguacu on the Brazilian side is a small city, with high rise buildings funky restaurants and all the facilities we could need, including a workshop where Ithaca could go off for a bit of loving.

Having experienced the Falls via the walkways on the other side, it was time to get into, under and over the falls!  First stop for some was a helicopter ride over the falls, which proved to be quite an adrenalin-kick as the pilot banked and turned over the falls to give everyone the best possible view.

Then it was time to experience the power of the falls from underneath, with a boat ride up the rapids towards the Three Musketeers section of the falls and then a thoroughly good dunking!

There are also walkways on the Brazilian side, one of which extends into the middle of the water, another great way to experience the Falls.

Leaving the water behind, confident that we all had more than enough photos of water, we visited the Parque des Aves which is a fantastic bird park caring for rescued native birds as well as showcasing the amazing variety of birds in Brazil – there are said to be over 1,700 species of birds in Brazil, that’s more than Europe and North America combined!  Stunning colours are a feature of many of the birds, including the iconic toucans and macaws, as well as the scarlet ibis and the huge variety of parrots and parrakeets.

Iguazu Falls sits at the junction of three countries – so half the group decided to visit the remaining country of the three, Paraguay.  A taxi took them across the border to the crazy border town of Ciudad del Este where some snapped up duty free electronics bargains, while others took the chance to have a wander around the market.

Brazilians are also very fond of barbeque, and so a group of us headed to a Brazilian parrilla where we experienced the Brazilian way of serving the meat – the waiters bring around skewers of meat and you can choose which bits you would like have.  It was an all-you-can-eat restaurant, and the food just kept coming!  Apart from the meat, a particular hit was the pineapple covered in cinnamon which we kept ordering over and over again!

Foz was a great introduction to Brazil, and our second destination, Bonito, was another fantastic spot.  Famous for its crystal-clear spring-fed rivers teeming with fish, the best way to experience it is by snorkelling and drifting down the rivers with the current.  Here the underwater cameras came into their own as we enjoyed this wonderfully relaxing morning.

Another way of experiencing the river is on an inner tube, down a couple of waterfalls and some rapids, including a surprising 5ft waterfall to start with which brought us all unstuck!

Mikkel and Terry opted for the major adrenalin option, a rapel down into the Abismo Anhumas and then a climb back up.  As the sun swings around to light up the cave, it is an unforgettable sight.

It was certainly a couple of action packed days in Iguazu Falls and Bonito, and we all have plenty of photos to prove it as you can see!