Gorillas in the mist, Rwanda and exploring Uganda 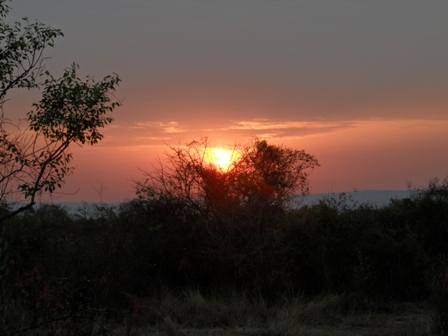 Leaving Arusha we were up to full strength again as the Kili crew had rejoined us.  Next stop, Nairobi, the manic Kenyan capital.  Another fairly easy border crossing and we were making good time until we hit the outskirts of Nairobi which start about 45km from the city centre!  This huge, sprawling, hectic city has the reputation of being Africa’s most dangerous and we were really only there to restock with food and other essentials before heading across to Uganda and beyond.  It was a fairly action packed stay to say the least, and while our campsite was a little oasis of calm in the midst of the chaos, everyone was very glad to be heading out of the city and back into the wilds.

A quick en-route stop, and we crossed another border, this time into Uganda. Our first stop was the capital Kampala.  We would be coming back this way, so it was only a brief stop before continuing west towards Lake Bunyonyi.  Bunyonyi has the reputation of being the loveliest lake in Uganda, and it didn’t disappoint.  We camped right on the shores of the lake, happily it is a hippo and croc-free lake!  While it is a great place to just chill, there are also plenty of opportunities to explore the lake and nearby villages.  Many chose to go on a boat trip to visit a village and were treated to singing and dancing, while some wandered around the lake’s edge and were invited into the house of one of the local herders.  There was also the opportunity to visit a local orphanage, or even to spend a couple of days canoeing on the lake and hiking through the hills that surround it.

We would be visiting Uganda again on our return from Rwanda, but our priority was to get to the Parc National des Volcans in Rwanda where we would have the opportunity to go trekking in the mountains in the hope of seeing some of the few remaining mountain gorillas.
In 1994, the inter-tribal tensions that are present throughout Africa came to a head with an estimated 800,000 Rwandans killed in a 3-month period.  The genocide is what most people think of when they hear of Rwanda, but the country is slowly getting to its feet again, and tourism is just starting to recover.

The moment that we crossed the border from Uganda, the difference was remarkable.  The “land of a thousand hills” certainly lived up to its reputation, but what was most striking was the level of cultivation as every inch of the hills and valleys were covered by crops.  The landscape was beautiful, and very different from what most people expected.  Together with the friendly welcome that we received, Rwanda made a very favourable first impression on the group.

Having the opportunity to quietly observe the mountain gorillas in their natural environment is undoubtedly a trip highlight. We set off in 3 groups, based on how strenuous each person wished the walk to be. A very professional operation, there are trackers who locate the family groups and keep the trekking guides informed as to where to find them, which hugely increases your chances of seeing the gorillas. Once you have hiked to where the gorillas are, you get to spend an hour with these magnificent creatures. The groups that are visited by tourists are habituated to humans, so our presence does not alarm them, and having tourists visit the gorillas is an important step in their conservation, as the local community can then see benefits in preserving the habitat and the gorillas themselves. With an estimate of less than 1,000 remaining in the wild, such projects in Rwanda, Uganda and the Democratic Republic of Congo are vital to ensure their continued survival.

Leaving the gorillas behind, we headed to the capital of Rwanda, Kigali.  Set amongst more of Rwanda’s famous hills, Kigali quickly established itself as most people’s favourite African city to date!  Fancy coffee shops, great supermarkets and a wonderful relaxed calm and safe feel, it was a great place to restock the truck and enjoy a bit more time in this surprising country.

Of course, given Rwanda’s history, a visit to the Genocide Memorial was an important part of many people’s visit to Kigali.  A moving experience, the memorial details the human and political sides of the genocide in Rwanda.  It was hard to reconcile the events of the past with the friendly and relaxed welcome we received throughout Rwanda.

All too soon we were leaving Rwanda, and on our way back into Uganda.  The nature of any multi-country journey such as ours is that we are subject to the vagaries of visa regulations and changes in border controls.  A change in the Ethiopian visa regulations since our departure meant that we would now need to send our passports back to our countries of citizenship (or the nearest possible consulate / embassy) in order to get our Ethiopian visas issued!  This was a significant change, as previously it was simply a matter of picking the visas up en route in Nairobi.  With an estimated 10-12 days to wait for our passports to be returned to us, we took the opportunity to explore more of Uganda.  While the delay will mean that our time in Ethiopia is reduced, Uganda has so much to offer and it has been a great chance to explore more of this great country.

Our first stop after Kampala was at a lovely campsite on the edge of the Kibale National Reserve.  The reserve is best known for its chimpanzee trekking, as well as having a high concentration of other primates and a great variety of birds.  After the success of the gorilla trekking, many of the group headed out in search of the chimps, and while the chimps proved a little more elusive, remaining in the forest canopy, it was yet another great African wildlife experience.

Our next stop was on the banks of the Victoria Nile, our stepping-off point for Murchison National Park.  Staying at a campsite attached to a posh lodge, we were able to enjoy their stunning bar overlooking the river, and some even managed to sneak into the pool!

The highlight of a visit to Murchison National Park is to take a boat up the river to see the Murchison Falls, reputedly the most powerful waterfall in the world, with plenty of game and bird viewing opportunities along the river banks.  The park is home to one of the most unusual birds in Africa, the Shoebill, formerly classified as a stork, but now considered to be more similar to a pelican, although its place in ornithological folklore is due to the fact that there are no clear relatives in the bird world.  Plenty of reason for the bird geeks on board to get excited!

From Murchison we turned south, heading back towards Kampala and on to Jinja, but first we had a brief stop at a very colonial looking hotel frequented in the past by Ernest Hemingway, Katherine Hepburn (“African Queen” was filmed on the Nile near Murchison Falls), and even the Queen.  We are guessing that none of them camped in the grounds like we did, but if they had they would have enjoyed the best ablutions we have seen for a long time!  Perhaps they all enjoyed the bar though, now amusingly quaint as it harks back to an era where only men were allowed into bars, as there was only a gent’s loo!

Jinja is the adventure capital of Uganda with plenty to keep us occupied for a few days while we wait for our passports to be returned.  White water rafting, kayaking, tubing, horse riding, sunset cruises, brewery tours, jet boating, quad biking – all are on offer, or you can just enjoy the campsite with its stunning views over the White Nile, the bar is a great place to watch the sunset.

0 thoughts on “Gorillas in the mist, Rwanda and exploring Uganda”

PrevPreviousSpice islands, mighty mountains and an incredible crater
NextA holiday within a holiday, and time to head northNext