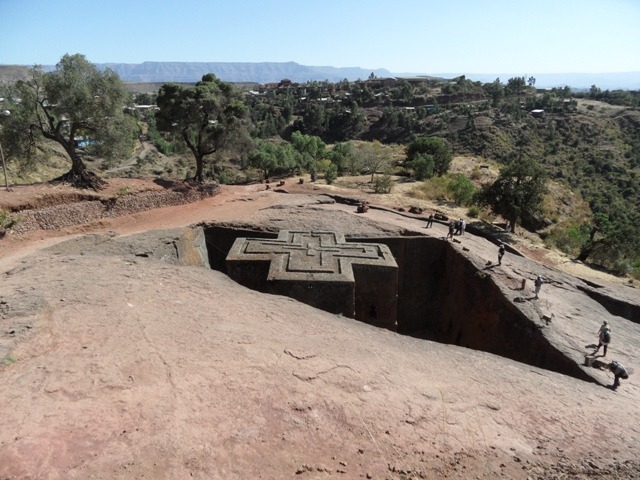 Ethiopia is, to many people, synonymous with famine and the images that were broadcast in the early 80’s, but as with all countries, Ethiopia is so much more than just what the headlines portray. Think amazing mountains, ancient Christian history with a twist and a nation who are all quick to put their hand out for a dollar or two.

Crossing from Kenya into Ethiopia, the first change was the return of tar roads.  It is difficult to explain how exciting this can be after bumping along for 2 days on rough gravel, sand and mud roads (albeit through incredible scenery in northern Kenya), but we can promise you it is very exciting!  Another immediate change was that facilities for tourists.  Water is a scarce commodity and showers (and at times toilets that can be flushed) become a luxury.  Forget the fancy campsites of east and southern Africa with their pools, internet and sparkling ablutions…  definitely a thing of the past!  But putting a bit of discomfort and the constant begging that we faced, Ethiopia offers an amazing experience of scenic beauty, fascinating cultures and incredible architecture.

Our first stop in Ethiopia was at the border town of Moyale.  Despite being Pete’s birthday, it was an early night for everyone as we were to head off super early the next day to Konso.  Limited time meant that our time in this area was reduced, however we had the opportunity to visit a local market.  This was definitely not a tourist market, and we almost brought trading to a standstill when we arrived in our faithful Athena.  But as trading recommenced it was great to wander around and experience the sights and sounds.

Heading north, we arrived at the Ethiopian capital, Addis Ababa.  Africa’s fourth largest city has a much more relaxed feeling than many of the more southerly cities, and barring an incident involving Dave’s wallet, it was a nice spot to spend a couple of days.  The main attractions in Addis are the Ethnological and Natural History Museums, at times a bit challenging to find, but rewarding for those who made the effort, and the Red Terror Museum which covers the genocide in the late 70’s was also rated highly.  We based ourselves in a local hotel, but with nice clean rooms and running water and flushing toilets and working showers it was a little paradise.  On the night of our arrival the hotel was the venue for a wedding reception where many of the group where invited to join the festivities and dance the night away. This hotel showed the other side of the Ethiopian people when they have not been affected by aid and tourism and were happy and proud to have us in their hotel.

From Addis we continued north to Bahir Dar via the Blue Nile Gorge.  Over a kilometre deep, the road is an impressive engineering feat and the scenery incredible as we wound slowly down and back up Ethiopia’s equivalent to the Grand Canyon.

Bahir Dar is located on the shores of Lake Tana.  Ethiopia has a very strong Christian history dating back from the 3rd century AD, and many of the attractions in the country relate to this element of Ethiopian culture.  Lake Tana is Ethiopia’s largest lake and also the source of the Blue Nile (where Jinja is the source of the White Nile) and is best known for the monasteries which are dotted along the shores of the lake and its islands.  The monasteries are simple circular buildings consisting of a covered walkway (the chanting room), an inner room with three doors – one for women, one for men and one for priests and deacons, and the sanctuary, the domain of priests alone.  The outer walls of the sanctuary are often heavily decorated with portrayals of religious stories and other images.  With a local guide to help explain the symbolism and the basic tenets of the Ethiopian Orthodox faith, the monasteries were fascinating to explore.

From Bahir Dar we headed east to Ethiopia’s most famous sight, the rock-hewn churches of Lalibela.  Dating from the 12th or 13th century, the churches have been carved into the rock, an incredible feat of engineering and labour.  The most famous of the churches, Bet Giyorgis (St George’s) is a breathtaking and awesome sight.

Our visit to Lalibela coincided with the last mass before Orthodox lent, and so we rose early to join the worshipers at the churches.  Watching the devotion and rituals followed by thousands of people was a very special experience in what is already a very special place.

After a day spent wandering the churches, a dust storm made cooking off the truck impossible, so we quickly arranged a feast of local food at the hotel restaurant.  Traditional Ethiopian food consists of injera, a sort of pancake with the consistency which could unkindly be compared with a combination of rubber and tripe, and flavoursome stews (wat) and sauces which you eat by ripping off a piece of injera and using it to grab some of the stew or sauce from the communal plates in the centre of the table.  It is a very different style of eating, as well as being different flavours, and while not to everyone’s taste it is an essential part of a visit to Ethiopia.  Live a country through its food we say!  Or as James Michener’s great quote says: “If you reject the food, ignore the customs, fear the religion and avoid the people, you might better stay home”.

Being the last day before lent, the people of Lalibela were in a party mood, so we thought it would be rude not to join them!  Heading down a dark alleyway we followed the noise until we found ourselves in a “tej” bar (called, somewhat incongruously, Torpedoes).   Tej is the local alcoholic honey wine, available in 3 strengths – mild, medium and strong.  A little bit reticent after the local guide’s description of the strong version (“it is ok when you are drinking it, then you stand up and fall over”), we opted for the medium. Served in glass flasks that look a bit like something out of a science lesson, it was quite tasty and, better still, quite cheap!  The noise that we had followed to find the bar was a traditional Ethiopian “praise singer”.  Consisting of a man playing a guitar-like instrument and a woman singing and dancing, the words are spontaneously made up to suit the audience.  As the songs are all sung in Amharic, only the word faranji (foreigner) gave us a clue as to what they were singing about!  Dancing is an important part of the entertainment as well, with everyone dragged onto the dancefloor by the singer to try to copy her moves – shoulder rolls, hip gyration and head wiggles – much hilarity ensued at our very poor imitations!

Continuing east and then north from Lalibela our next stop was Mekele, stepping off point to visit the Gheralta cluster of the rock-hewn churches of Tigray.  On the face of it, the churches are less impressive and more rustic than their younger cousins in Lalibela, however the experience of calling the priest to open the church (no particular magic involved, they usually write their mobile numbers on the door) and clambering over rocks to reach them is what makes a visit to them memorable.

Further north and we reached the city of Axum.  A very pleasant town, it was a great place to celebrate Jeanne’s birthday.

Reputedly also home to the Queen of Sheba, and the final resting place of the Ark of the Covenant, Axum’s main drawcard these days is its stellae (obelisk) fields – up to 36m tall and carved out of a single piece of granite they are an impressive sight and reflect past glories of the Axumite kingdom.

Completing our tour of the historical sights of Ethiopia, our last destination was Gonder, home to the Royal Enclosure consisting of various castles and palaces constructed by past rulers.  Framed by jacaranda trees in bloom, it was a great place to wander around for a couple of hours.

Mark and Teri, being US passport holders, were aware at the start of the trip that it was unlikely that they would be able to get into Sudan – although obtaining a visa would not be a problem, it is often the case that it is not honoured at the border.  After meeting with the Sudanese consul in Addis Ababa, he confirmed that this was still the case, and so Mark and Teri decided not to risk it and to fly to Egypt instead.  Gonder provided the location for their farewell, with drinks in the courtyard of the hotel (which also served to get rid of the last of the alcohol on board before we crossed into dry Sudan), and then a lovely dinner at a restaurant in the town, featuring Teri’s requested meal of pizza.  They have both added a huge amount to the expedition, Mark’s enthusiasm for and knowledge of birds has inspired a new generation of twitchers, and Teri “I got to the top of Kili first” has been a great friend to everyone, and they will both be missed in these final weeks, and we look forward to meeting up with them again in Cairo.

To focus solely on the historical sites is to do Ethiopia an injustice as it is a country filled with natural beauty as well.  Most of the country sits above 2,000m above sea level, and Ethiopia is a country of many, many mountains.  The scenery is stunning and ever changing, every bend and switchback providing a different aspect.  From high altitude grasslands to stunning blue lakes, lush green hills or sharp rocky peaks, we passed through a surprising range of landscapes.

Our time in Ethiopia was fascinating, but also challenging.  As we mentioned earlier, begging is everywhere, to a much greater extent than any of us have experienced in any other country anywhere in the world.  Friendly waves turn to outstretched hands accompanied by the sound that followed us everywhere we travelled – “money, money, give me money” or pen, or candy.  Pre-arranged prices are seldom honoured, and touts are persistent and omnipresent.  Aid continues to flow into the country which seems to have a demotivating impact in many places.  Ethiopia undoubtedly is a troubled country, and left all of us with much to think about.  It also left us eager to explore our next destination – Sudan.

PrevPreviousA holiday within a holiday, and time to head north
NextSu-dan-easyNext