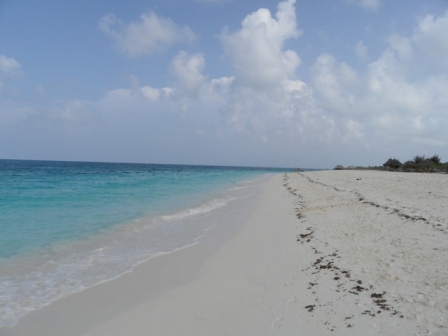 Zanzibar, a small island off the coast of Dar es Salaam in Tanzania, is a complete change from the mainland.  Historically it has been an important port on the trading route between Arabia and Africa, and the mix of cultures is readily seen as soon as you step off the ferry.  The island draws bikini-clad tourists seeking sun, sand and sparkling water, but outside of the beach resorts the contrast is marked, as it is a conservative Muslim society.

The ferry arrives in the heart of Zanzibar, Stone Town which is a maze of cobbled streets, old buildings in varying states of repair and fancy hotels, street stalls and a fantastic night food market.  While we are in Zanzibar everyone has the opportunity to head off and do whatever they wish.  Some of the group chose to stay in Stone Town, enjoying the markets, bars, restaurants and a day trip out to Prison Island where snorkelling in the turquoise water was a highlight.  Others had a night in Stone Town and then went further afield, staying in a beach resort on the coast where the decision to go diving or just chill  was quite a difficult one!

Zanzibar is famous for its spices, so it seemed only appropriate to do a spice tour.  Heading into the interior of the island, we spent a fascinating morning walking through a spice garden – apparently spices don’t all come in glass jars on supermarket shelves!

While most of the group were relaxing on Zanzibar, four of our group were having a slightly more challenging time.  Teri, Mark, Dave and Sam were on their way up the Marangu Route, climbing to the top of Mt Kilimanjaro.  At 5,895m, getting to the summit of Kili is quite an achievement, with the high altitude being the major challenge.  At 6.36am on the 16th of January Teri reached the top first, with the other three very close behind.  A great achievement, and well worth the aching muscles and exhaustion at the end they assure us!

While the Kili climbers were still slogging their way up the highest mountain in Africa, the rest of the group left Zanzibar and we headed for Arusha.  A fairly unremarkable town in its own right, it has secured its place on the tourist trail by being the access point for two of Tanzania, and Africa’s, greatest wildlife experiences – the Ngorogoro Crater and the Serengeti National Park.  With the consensus being that the Crater was what everyone wanted to see, we all headed off in Land Cruisers for a two day / one night safari.  Staying just outside the Crater at a campsite attached to a posh lodge, we enjoyed the luxury of someone else doing the cooking and washing up and then it was an early night to get ready for a very early start the next day.

Well before the sun came up we were huddled over our cups of tea and coffee and enjoying a full fry-up breakfast before loading up into the Land Cruisers again for the trip into the Crater.  The Ngorogoro Crater is actually a massive collapsed volcano, which at 20km wide, is one of the largest in the world.  The steep walls of the crater almost act as a natural fence, although the animals are free to move in and out of the Crater, the fertile plains and good water supply mean that the concentrations of game that you can see in the Crater are almost incomparable!  Despite having visited a huge number of national parks already in our three months on the road, the Crater really was something very special, made even more so by watching wildebeest give birth.

PrevPreviousThe journey and the destinations
NextGorillas in the mist, Rwanda and exploring UgandaNext