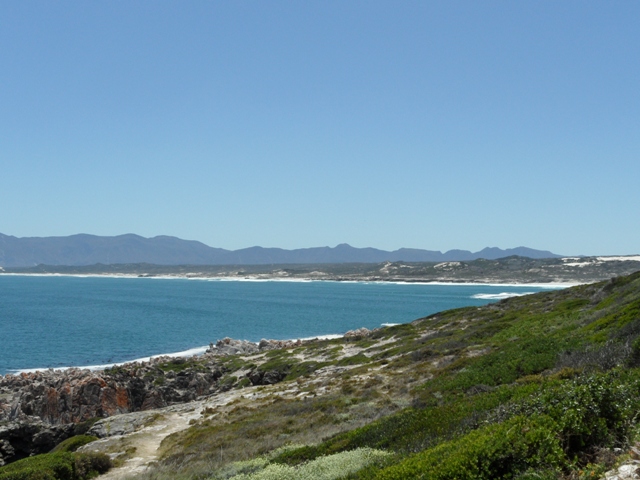 After months of preparation, saying farewell to family and friends and stuffing all the essentials into their backpacks, the Odyssey Overland Cape Town to Cairo 2010 expedition is on the road!

And here is the group (oh, and Table Mountain hiding in the background!):

Setting off from Cape Town it was only a short hop to Stellenbosch, the heart of South African wine making.  It is a beautiful town, with stunning Cape Dutch style buildings set against manicured gardens and surrounded by mountains.  But a trip to Stellenbosch wouldn’t be complete without sampling the local produce and we visited 3 wineries and a brandy distillery.  We also had the opportunity to visit a cheetah breeding centre as well as enjoying the beautiful gardens surrounding the wineries.  It was a lovely day and a great way for everyone to start getting to know each other.

Stellenbosch is also our first opportunity to set up camp and enjoy the first (of many) nights under canvas.  Our new expedition tents are nice and easy to put up, and with four of the group having travelled with Odyssey on previous expeditions, camp was set up in no time and everyone started to get used to life on the road.  Sitting around a roaring campfire with a couple of ice cold beers and some great “truck food” reassured everyone that camping done properly can be very comfortable!

From Stellenbosch we headed south, driving along the spectacular coastal road.  We stopped off at a colony of African Penguins, hilarious to watch as they potter around in such an ungainly way on land, much more at home on the water, yet they build their nests by burrowing into the sand and shrubs. We also stopped off in Hermanus, the “whale-watching capital of South Africa” – unfortunately the magnificent Southern Right Whales weren’t putting on much of a show when we were there, but a walk along the coastal path still offers spectacular scenery and we would have other opportunities in the coming days to see the whales in action.

Our destination for the night was a private nature reserve just a bit further along the coast.  Watching the sunset over the dunes and enjoying a magnificent barbequed loin of beef, as well as the chance to see Eland, the largest antelope in Africa, it was a lovely introduction to bushcamping.

We had two nights at the reserve as there are plenty of activities on offer.  Some of the group chose to go Great White Shark cage diving, an adrenalin rush as these huge creatures (some up to 4m long) came out of the murk and swam towards the cage, at times it felt as if they were eyeing you up!  Others chose the more sedate option of a walk along a stunning beach with the chance of seeing whales.  The group all met up again at De Kelders, and our lack of whales at Hermanus the day before was forgotten as we saw mothers and calves slowly swimming past the cliffs, fluking every now and then to provide the perfect photo opportunity!

Many people think that the southernmost point of Africa is Cape Point, however it is actually Cape Agulhus, so this was our next destination.  It is only a short drive along dirt and tar sealed roads, but we managed to see plenty of wildlife along the way including the beautiful Blue Crane, the national bird of South Africa, as well as the first of many different species of antelope.  A quick photo stop at the supposed “meeting place of the oceans”, and people were free to spend the afternoon wandering along the coast, or just relaxing at the campsite.  A bit of rain in the evening and a howling cold wind forced us to seek solace in the nearby pub which was much friendlier than its name of “Jaws Bar” would suggest, and was a great place to celebrate Terry and Cecilia’s birthdays with a bit of cake and traditional South African melktart.

As we were at the southernmost point of Africa, the only way was up!  We headed inland and then returned to the coast at the lovely town of Knysna.  A retirement and holiday home hotspot for the people of Cape Town it has a lovely relaxed feel and plenty of ways to enjoy the sunshine whether that be to walk to the heads to enjoy the sunset, wander the funky shops in town, get sandblasted on the beach at Buffalo Bay while watching the kitesurfers, or maybe even a couple of holes of golf.  A very relaxing couple of days and another lovely campsite with more wildlife spotting opportunities – bushbuck and Knysna louries were the highlights.

After all that relaxing, time for some adrenalin…  Along the Garden Route just past Knysna is the world’s highest bungee jump (216m) off Bloukrans Bridge and it is worth stopping off just to watch others take the plunge.  But it is even more interesting when you know them!  Six of the group, Leigh, Georgia, Terry, Sam, Jake (reluctantly, but with the support or perhaps coercion of his father Ken) and Rogan, one of the crew set off across the bridge and after safety briefings by the bridge staff they were all harnessed in and one by one shuffled nervously to the edge of the bridge before diving off.  They were buzzing with excitement as they returned and received a heroes welcome from the rest of the group!

After the morning’s excitement, it was a much calmer afternoon as we visited Tsitsikamma National Park.  This coastal national park is home to the start of the famous Otter Trail hike, and offers great walks along the coast as well as a stunning campsite right on the edge of the crashing Indian Ocean.  The weather was variable during the day but didn’t stop everyone from getting out and exploring, and the rain held off long enough for us to cook dinner and head off to bed before the storm really came through!  A very windy night, but in the morning the sun was shining once again and we packed up for an early start towards our next destination, Addo Elephant Park.

Addo was set up to protect the small group of elephants that remained after an organised cull of over 100 elephants in the 1920s which caused a public uproar to protect those that remained.  The park now boasts over 500 elephants, as well as many other species all of which are indigenous to the area.  We are able to use the truck to do game drives through the park, and this is where Athena really starts to show off as her height gives a fantastic view into the bush and over shrubs to see things that those in cars couldn’t.  We did three game drives while in Addo, two afternoon drives and one early morning drive, all of which gave us fantastic sightings of elephants, Cape Buffalo, Kudu and Hartebeest (antelopes), mongoose and meerkats, Black Backed Jackals, tortoise, warthogs, zebra, Flightless Dung Beetles as well as many species of birds.  It was a great introduction to game viewing in Africa, and has whet everyone’s appetite for more national parks in the coming weeks and months.

0 thoughts on “Time to head north!”