In the jungle, the mighty jungle 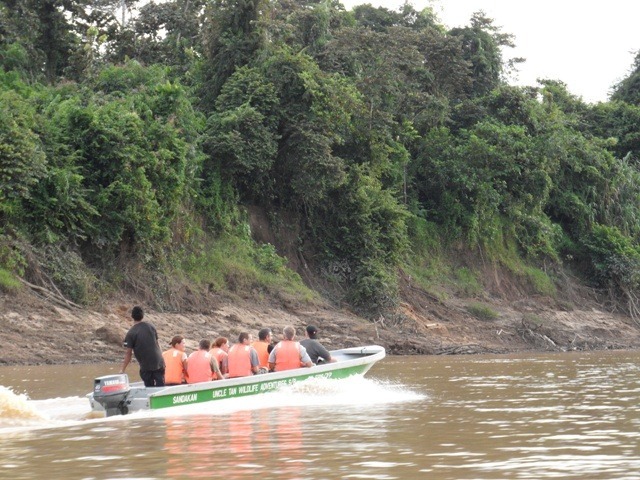 From KK we headed across to Sandakan where we arrived in time to visit the Sepilok Orangutan Sanctuary for the morning feeding.  Our visit started with an excellent video about the work that the Sanctuary does in terms of rescue, rehabilitation and where possible, release of orangutans, and then headed to the feeding areas.  As is the case with all wildlife viewing, there is no guarantee that the animals will turn up, and at the morning feeding only two of the younger orangutans were hungry, with more coming along to the afternoon feeding.  Watching them is fascinating – whether it is as they delicately peel a banana with their lips, move so easily through the trees, or just hang around on the many ropes that they can use to get to the feeding platform.

After a very early start to get to Sandakan most of us retired to the pool at the hotel and lounged the rest of the day away, while the tireless Barry and Pauline headed off to explore the walking trails nearby.

The next morning it was time to head for our jungle safari in the Kinabatangan Jungle.  Expectations ranged from excitement (Simon) to terror (Ben) as we boarded the boat that would take us up the river to the camp.  But as the wildlife spotting started, even Ben warmed up to the idea of spending a couple of days here!  We came upon a family of Proboscis monkeys and saw many different species of birds including the distinctive hornbills.

The accommodation at the camp is very basic, but you barely get time to use it anyway as there is a full programme of wildlife viewing opportunities – boat-based and walking safaris are regularly scheduled during your stay, including at night where the walking safari gives you a great chance to get up close to some of the nocturnal or sleeping animals of the jungle.

It was however on the boat based trips during the day that we saw two things which were highlights for everyone – a wild orangutan feeding on fruits high up in a tree, and a huge salt water crocodile!  Here is a selection of the (many) photos from our time in the jungle:

The morning of our departure, after another boat safari, the staff at the jungle camp threw off their hangovers (they had been celebrating a birthday the night before) and challenged the “tourists” to a game of football.  Fortunately we had by now been joined by Taylor who, along with Katie, has just recovered from their ascent of Mt Kinabalu and can now walk up and down stairs!  That certainly had our goalie sorted!  As for the rest of the “tourist” team, it is fair to say that what they lacked in skill, speed and fitness they made up for in enthusiasm.  The staff team had the advantage of deciding when the game was over (ie after they scored another goal), so it was a disappointing end for the tourist team, but a great morning of entertainment for everyone!

From the jungle we headed to Sandakan for a night but more importantly, a shower!  No-one was in a particularly explorative mood, so the delights of Sandakan remain undiscovered!  An early night for everyone as they prepared for an early flight to KK, and of course a final night out to celebrate the end of this epic journey!  23 countries, 29 weeks, amazing.