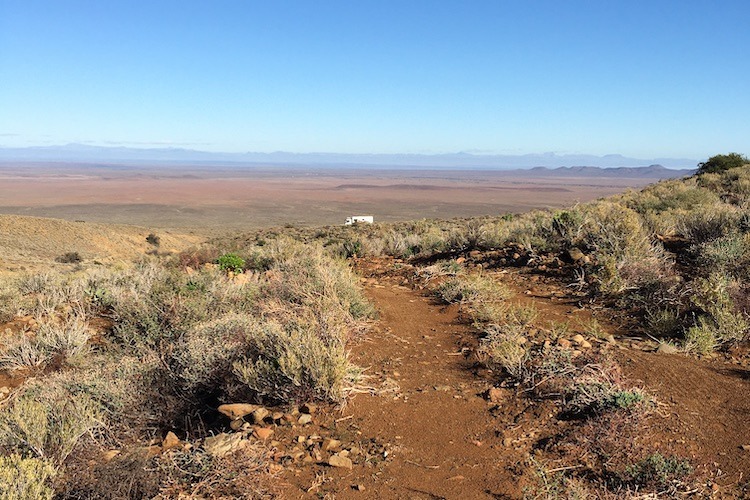 The Tankwa Karoo National Park covers over 146,000 hectares of land in the Northern and Western Cape and is surrounded by the Roggeveld and Cederberg Mountains. It is a place of wide-open spaces, endless starry skies, stunning vistas, roaming wildlife and prolific birdlife. It is a place to explore on foot, by mountain bike or by vehicle, and the ultimate place for a digital detox with no cellphone reception anywhere in the park (and no, there’s no wifi).

Why should it camping in Tankwa Karoo National Park be on your to-visit list? The feeling of space and alone-ness is quite incomparable. Beautiful scenery adds to the experience. It is truly a place to get away from it all.

We enjoyed two nights camping in Tankwa Karoo NP, staying at two different campsites. We had no reservations before we arrived (it’s early winter and Covid is still keeping away international tourists), and on arrival we chatted to the manager at reception and asked for his recommendations. There are 2 formal and 5 informal campsites in Tankwa Karoo National Park, and these were the ones he recommended.

Our first night camping in Tankwa Karoo was at Steenkampshoek, an informal campsite in the shadow of the Roggeveld Escarpment. The first part of the drive in is a straightforward gravel road (albeit with the corrugations that were a memorable feature of our visit), and we passed the Paulshoek Cottage, one of the park’s self-catering cottages.  A little further on, a signpost directed us to turn left and so we started to wind up towards the camp.

The trail up to the camp was a fun but challenging drive with the last 4km taking us around 45 minutes. It is a 4×4 trail, and definitely requires a high clearance 4×4 ute/bakkie/pickup. Odyssey (a 2×4 truck) handled the trail easily; our short wheelbase and good entry and exit angles were very helpful, especially for the deepest of the dry riverbed crossings.

The campsite itself is a clearing next to an old stone cottage and kraal. There are several firepits to choose from depending on the wind and where you have parked your vehicle/s and that’s it. The feeling of isolation and space is incomparable. The silence is complete – apart from the occasional bird sound.

For our second night camping in Tankwa Karoo we decided to try a different campsite, so we chose the Perdekloof campsite, one of the Tankwa Karoo’s two formal campsites. Located at the mouth of the Perdekloof gorge, the drive in was straightforward in the truck, albeit a little narrow at times.

We had been allocated campsite 6, the furthermost site of the 6 available at Perdekloof. Each campsite has its own ablutions including a toilet room, huge shower room and a scullery/wash up area, with gas heated hot water systems. The ablutions were probably the best we have seen in a Sanparks campsite, and in fact some of the best we have seen in any campsite! Very impressive.

Our campsite was secluded, with two potential parking spots for our big truck. A braai/bbq was provided, and there is wood for sale at reception (the only thing they sell, you need to bring everything else in, and it’s not like you can just pop to the shops…)

There was lots of birdlife around the campsite, including a family of rather bold Cape Francolin, and there was ample sign of springbok, and gemsbok, but we weren’t lucky enough to see any while in camp.

As we drove out of the park after our two-night stay, we chatted about which campsite we would stay in again – and it was unanimous, both campsites we had stayed at were so different, first prize would be to stay at one of the other campsites and experience something else of course!

You don’t really come to the Tankwa Karoo to go game driving, but that said, we saw plenty of majestic oryx/gemsbok and graceful springbok, as well as an awesome sighting of an African Wild Cat. We saw baboons on the hill in front of the Perdekloof campsite, happily they didn’t come any closer. Being winter, hopefully most of our legless friends are hiding away somewhere, although it’s interesting that the visitor map lists Cape cobra as being “commonly seen in the park”…

We didn’t take the bikes off the back of the truck while we were in the park as the terrain is a bit too rocky for our youngest MTB fan, but we did take the opportunity to do some hiking around the campsites. The kids love to hike, and on the drive down from Steenkampshoek the truck was ambling down slowly enough that the kids and I could walk and jog down the track ahead of the truck, giving us a great chance to look at the bush in more details and have a chat about what we were seeing, and life in general of course 🙂

There are reported to be 188 species of birds recorded in the park. We didn’t exactly get to that number, but there was still plenty of birdlife around, particularly around the Perdekloof campsite, time to break out the trusty Newman’s bird guide and binoculars.

No light pollution for miles (nothing around for miles actually!) +  clear Karoo skies = fantastic stargazing.  Sat next to the fire, reclined in our camping chairs, talking quietly while the kids sleep in their bunks inside, while gazing up at the stars might just be our perfect camping evening.

We absolutely loved our time camping in Tankwa Karoo National Park. It was June and there were no people around (on our first night apparently we were the only campers in the entire park). It was cold at night (didn’t stop us braaing/bbqing, and it was very comfortable inside the truck), but the skies were clear, and at night the sun was nice and warm. There was no rain while we were there, but it had rained the night before and there was evidence of recent wash aways across the road – the roads might get quite interesting if it rained while you were there).

The roads through the park are however pretty awful, with some of the worst corrugations we have experienced anywhere around the world (even worse than the road to Ruaha National Park in Tanzania). When we left the park we used the Sutherland exit and the roads both inside the park and outside the park heading towards Sutherland were truly awful.