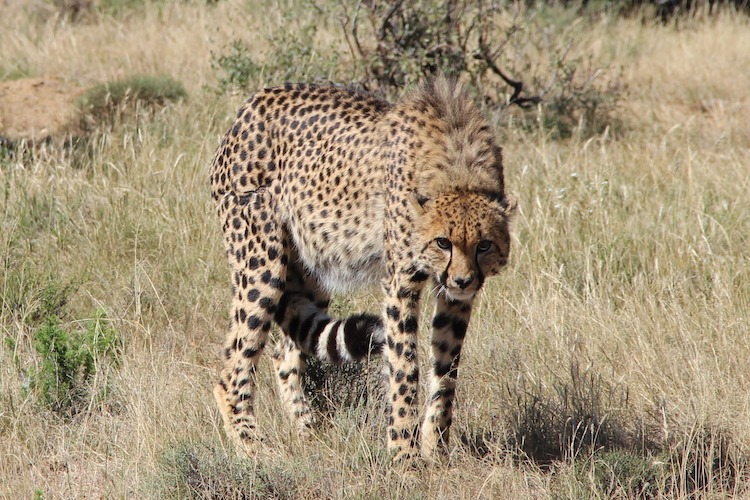 Pete has seen cheetah many times, including an epic sighting of a mother and three cubs on a kill on our most recent visit to Etosha. However I haven’t had the privilege of seeing these beautiful creatures in the wild, so when we visited Mountain Zebra National Park and cheetah tracking was on the list of activities, I couldn’t resist…

Here’s what happened, and why Mountain Zebra National Park is well worth a visit.

Cheetah tracking is an understandably popular option and was fully booked when we arrived, but we decided I should take a chance and turn up at reception at the designated time and, happy days, they had a cancellation so I was good to go.

Loading into the game viewing LandCruiser with 8 random strangers, we set off on a drive through the park. Our guide/tracker, Andrew, had a tracking signal receiver and we stopped periodically for him to listen for the pip-pip-pip that would indicate a cheetah was nearby (well, relatively nearby, the receiver has a range of 4km).

For the first hour we had no luck, eventually turning up one of the serious 4×4 trails in the park in order get a higher vantage point. The receiver works on a line-of-sight basis, so height is a definite advantage. Success! Andrew heard the noise he needed to hear, and we headed back down the mountain track to drive across to the other side of the park.

Once we reached the point where the signal was strong, it was time to get out of the LandCruiser and track the cheetah on foot. Mountain Zebra National Park has buffalo and lion, as well as cheetah, so Andrew was carrying a rifle, the rest of us were armed only with cameras and binoculars.

After walking across the rocky terrain for a while, Andrew stopping periodically to check the signal, he turned to us and said, it’s gone. Disappointed, we all trudged back up the hill (it’s not called MOUNTAIN Zebra National Park for nothing), and got back into the vehicle.

Undeterred Andrew continued driving, checking, driving and checking until we reached a plateau at which point he headed off across the landscape, no road in sight. Parking up, it was time to start walking again.

All of a sudden the cry went out – there they are! And we turned to see three cheetahs running at full pelt after the younger kudu. Seeing the cheetah running was incredible, and more than any of us anticipated. Nature played out, as it does, and the alpha cheetah took down the young kudu, we could hear the struggle and then there was nothing but silence.

(apologies for the grainy photo of the chase – it all happened so fast!)

“OK, now we go down” said Andrew and we cautiously picked our way down the rocky slope and approached the three cheetahs who were feasting on their hard-earned meal in the shade of a bush. The cheetah are accustomed to humans on foot and are usually relaxed, but there was food at stake and so the younger two cheetahs greeted us aggressively, but after a bit of yelling by Andrew (along the lines of, oh don’t be so ridiculous you two), the young cheetahs retreated to the shade and their prize.

What an amazing experience! We all appreciated how unbelievably lucky we were to have witnessed the cheetahs’ speed, agility and prowess. I returned to camp sunburnt, windswept and blown away.

About the cheetah of Mountain Zebra National Park

There are currently only 4 cheetah in Mountain Zebra National Park. Unfortunately the breeding female was killed in November 2020 by a lion while she had three young cubs. Two of the cubs have survived, a male – Chad, and a female – CJ, and they are being raised by their father, Mabula, and these are the cheetah that we saw. It is extremely unusual for a father to raise cubs – in fact our guide told us it was the first time it had ever been documented.

Cheetah tracking was an absolute highlight, but even without having experienced it, Mountain Zebra has won us over with its incredible scenery, interesting drives and variety of wildlife.

We went for several game drives on the roads throughout the park and we were rewarded with great plains-game sightings including Red Hartebeest, Kudu, Black Wildebeest, Springbok, and of course, the Cape Mountain Zebra. Some of the smaller stuff we saw included Yellow Mongoose, Rock Hyrax and Ground Squirrels.

Mountain Zebra National Park has a small population of lions and buffalo, but these unfortunately proved elusive for us this time.

One of the circuits, the Kranskop Loop, takes you up high into the mountains, reaching over 2,000m, and while we didn’t see much in the way of 4-legged creatures, we did enjoy the magnificent views. There was also some adventurous driving to be had – as we firmly embrace our mantra, we are a truck not a bus, we carried on past the bus turning areas and were rewarded with some amazing roads twisting and turning through the mountains. Our short wheelbase is definitely an advantage, although we are still a large vehicle and low hanging branches are our nemesis.

There are also some 4×4 trails but these are really LandCruiser or Land Rover territory – our truck would have been far too wide and long.

Overall, the scenery is absolutely stunning and it’s worth visiting the park just for the views!

We stayed in the national park campsite, which has about 30 sites for caravans and tents. Some sites benefit from the shade of the acacia trees which is very welcome in the midday sun (even in autumn). Each site has a drum braai, and access to a tap, and most sites also have a paved area where you can pitch your tent and/or your kitchen depending on your set-up.

There is a large central ablution block which is well-maintained and clean, and even has a laundry where, for the bargain price of R15 per load, you can use the token-operated washing machine.

When we visited the campsite was pretty full, but it was still very quiet in the evenings, and the stars were spectacular. Monkeys (“bush criminals”) and baboons are a problem, but that’s pretty universal at accommodation in national parks so it’s just something to be aware of.

There is chalet and lodge accommodation available in the park, and there is a restaurant and a small shop.