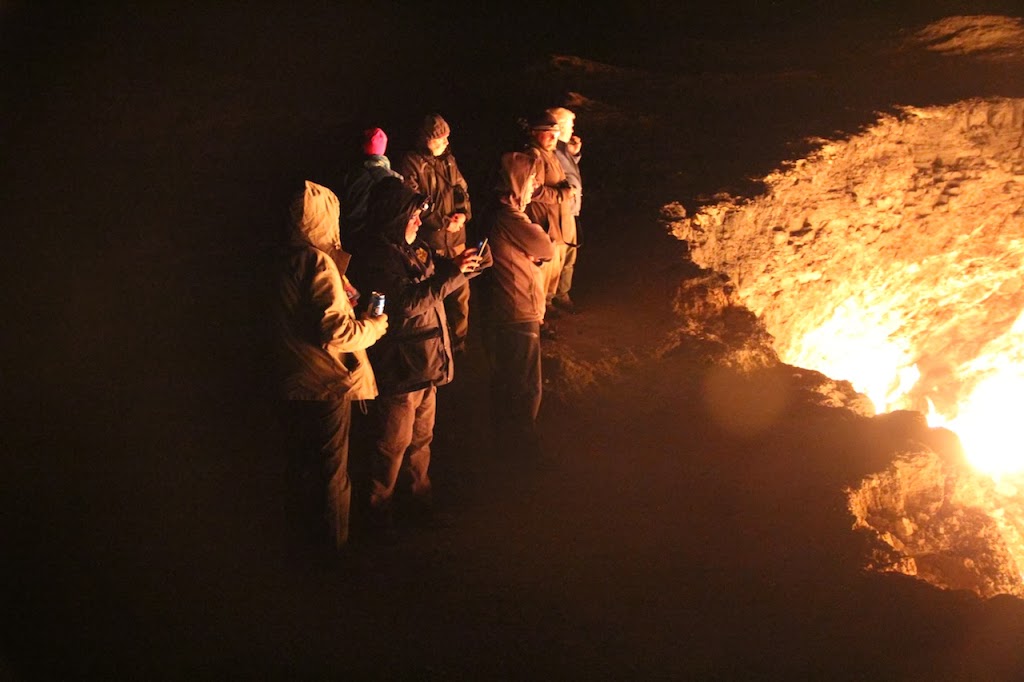 Greetings from the Caucasus region, Armenia to be exact.  But more about that later, first let’s return to where we left off – the Caspian Sea ferry crossing.  This is always an interesting part of the journey – with no timetable and negotiation being the only way to secure passage for either the group or the truck, we can find ourselves stuck on one side of the sea or the other, or in our case, we found ourselves crossing VERY slowly – restricted to 6 knots due to “economica” (the captain was unwilling to use up his “expensive” fuel), our crossing stretched on – we arrived at the port in Turkmenistan at 6.30pm on Sunday night, and eventually exited the port in Baku, Azerbaijan, at 6.30pm on Tuesday evening, a full 48 hours later.  Not a record for a Caspian crossing by any stretch, but long enough to make us very glad of a hot shower and comfortable hotel in Baku.

But first, what did about our travels through Turkmenistan?  Turkmeni-where?  As one of the least visited countries in the world, it is perhaps unsurprising that many have never heard of this former Soviet state which borders Iran, Afghanistan, Kazakhstan, Uzbekistan and the Caspian Sea.  It certainly boasts some of the more unusual sights on our journeys through Asia which make it an unforgettable destination.

Our border crossing from Uzbekistan was relatively painless for this part of the world – a mere one hour exiting Uzbekistan, and then only a couple of hours to enter Turkmenistan which was a welcome surprise.  We had been advised to enter Turkmenistan through a less frequently used border, as the president of Turkmenistan would be visiting our usual border town, accompanied by road blocks that would see us stuck for a day or so… that didn’t sound like much fun to us, so to the less used border we went!  And less used it certainly was, our arrival heralded much excitement and interest, fortunately all good natured and friendly enough.

Finally through the border we headed to the bazaar of the nearest town, somsas (lamb pasties) and fruit were purchased for lunch and then we headed off into the desert where we enjoyed a spectacular sunset and bush camp.

Fact 1: Fuel in Turkmenistan is some of the cheapest in the world – in fact up until 2006 or so, it was around 1 US cent per litre – nowadays it is around 20 cents per litre at the pump, residents are also granted a fuel allowance, although foreign vehicles sadly have to pay a fuel surcharge on entering the country.Heading further south we encountered Fact 2 about Turkmenistan…

Fact 2: Turkmenistan has some truly terrible roads.  While I have no scientific evidence to back this up (other than our average speed), nor surveys or consultant reviews – just the knowledge that we have bounced, twanged and banged our way along some of the worst roads we come across on this route – I still consider this to be a fact!Driving down towards Ashgabat, our routing took us almost directly south for a couple of hundred kilometres.  We covered the first 75km of these in around 3 hours.  As Pete (and all the other vehicles on the road) weaved from left to right and back again in a fruitless search for the smooth line, we all gave up little prayers of thanks for the infrastructure in our own countries!

The road improved a bit as we passed one of the many police checkpoints that feature along all the roads in Turkmenistan.  We stopped for a quick lunch which proved to be slightly more windy and sandy than we would have liked, but which then offered us all the chance to prove our mettle as overlanders with a bit of sandmatting. Having stopped for lunch down a path that we had hoped would yield some shelter, it became clear that turning around wasn’t an option, so Pete attempted to guide Penelope back onto the road backwards…  a patch of deep sand brought their efforts to a fairly rapid standstill and it was time for everyone-off-get-the-sandmats.  Proper overlanding!  It only took one attempt – the sandmatters like to think that it was our skill at digging out the wheels and positioning the mats properly, although in reality it was perhaps more to do with Pete’s reversing skills that saw us launched back onto the tarmac and once again on our way with only a few grains of sand under our fingernails to show for our efforts.Our destination for the evening was the Darvaza burning gas crater.  Theories abound as to how it came into being, the accepted story now goes along the lines of a well drilling for gas collapsed into a sink hole, the volume of gas escaping was a hazard, so the easiest way to “safely” deal with the gas was to light it so that it would burn off before it became problematic.  The result is an astounding sight.  We headed up to the crater in the dark, and on cresting the last rise you are greeted with a burning pit of fire made all the more dramatic by the absolute darkness around it.  Photos do not do it justice, it is an incongruous and unforgettable sight.

A couple of nights of bushcamping in the desert and we were all very pleased to arrive at our hotel in Ashgabat – a touch of luxury with actual hot water and actual water pressure!  A quick shower and orientation with a map and most of the group headed off towards the Russian Bazaar, others to the Berk café, where the vodka flowed more rapidly than the food  (always a perilous set of circumstances… ) The culinary scene in Ashgabat is a little limited, but a solid favourite for western-ish food is the British pub called, creatively, “British Pub”.  Some found it for lunch, others headed there for dinner, and enjoyed a bit of live music and games of pool against what could be the world’s worst hustler.  At just before 11, the music stopped, giving us enough time to get back to the hotel before the curfew which is in place every night.

Fact 3: Turkmenistan is a country where there are many restrictions in place – as a foreign vehicle and a group on tourist visas we must have a local guide on board, we must declare (and stick to) the route we will travel through the country, and we can only take photos of certain monuments and sights, especially in Ashgabat, the capital.  The restrictions are definitely not limited to foreigners – in Ashgabat it is forbidden to honk your horn or to drive a dirty car.

A city tour the next morning with our local guide gave everyone the opportunity to explore more of this city which holds a Guinness world record for being the most marble-clad city in the world.  With fountains, parks, statues, imposing public buildings, and the world’s largest mosque, this is a city designed to impress – and it duly did.  Not many photos to show for the tour sorry, since it is not allowed to photograph many of the monuments and buildings!

Our departure from Ashgabat coincided with the Independence Day celebrations – fortunately the roadblocks weren’t in place when we were leaving, so our exit from Ashgabat was smooth, unlike the roads after about 150km which deteriorated again and we returned to bumping and bouncing our way through Turkmenistan. And so now we return to where we started – the Caspian Sea ferry.  We pulled into the ferry port in the early evening, parked up and started to wait.  After a short time we were told that the group would definitely be leaving tonight, as would the truck, but on a different boat.  We were told that at 9pm we would know more, so it was time to do a bit of stealth cooking in the port carpark (not that frying onions, bacon and mince is particularly conducive to stealth cooking…), and had a delicious Mexican-inspired meal.  We had finished dinner by the time the next command came through – as usual, these processes are a mix of waiting, and then sudden panic as you are told that you must instantly report to immigration, which really only means you must wait in a different location!  After a protracted immigration process, the friendly English speaking immigration officer smiled at Kirsten and said “You are all done?” – it took several attempts to convince him that no, there were in fact 8 more of the group standing outside the customs area starting to worry if they had been left behind!  The remaining group members were then processed in double quick time, and we headed off into the port area to board the Dagestan, a boat well known to us at Odyssey, not necessarily in a good way.

Hauling all our worldly belongings across a couple of train tracks and up the cargo ramp onto the boat we were greeted by the crew of the boat who immediately demanded our passports and payment before we were led up a very narrow, steep set of ladders up onto the decks of the ship.  With cabins allocated, the lounge identified and the top deck found by some, it was all going fairly smoothly until Cabin 18 had a small incident involving locking themselves into their room.  While Mike attempted to dismantle the ship to free them, Kirsten headed off and eventually convinced one of the staff to come down and assist – his assistance was immediate and absolute – as soon as he arrived outside Cabin 18, Kirsten pointed at the door and gave it the most gentle of nudges with one finger, whereupon the door opened with not a moment’s hesitation!  Embarrassed glances and nervous giggles ensued as the crewman looked on bemusedly, still not sure why he had been removed from his game of cards to come and watch us open a door!

Reading, photographing, chatting, pilates, tea tea and more tea, and the occasional meal punctuated our time on the ferry – our crossing was literally smooth, with barely a ripple on the water, seasickness wasn’t going to be an issue.  Having dropped anchor just outside the port in Baku at around 4am, we awoke to a splendid sunrise, and a gorgeous sunny day where we gazed longingly at the city of Baku – so close yet so far from our reach.

Finally, the engines fired up, and we steamed into port (using both engines, quite a treat after our economica crossing).  Immigration and customs were relatively painless, and before long we were officially into Azerbaijan, country number 5, and once again reunited with Pete and Penelope who had managed to beat us across the Caspian. Coming next: Miracles in Azerbaijan.