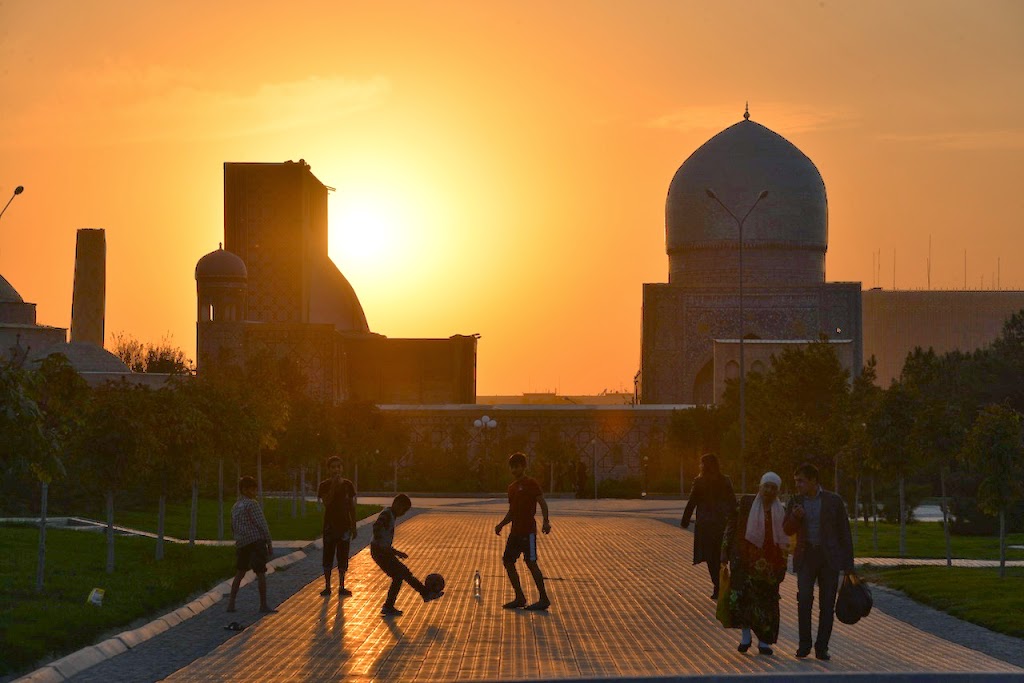 It was time to wave goodbye to beautiful Kyrgyzstan and catch a first glimpse of Uzbekistan. At the border just outside Osh in the Fergana Valley the customs and immigration officials seemed a bit bemused by us and by Penelope, they kept asking us if we had any CDs or books and insisting on going through the photos and videos on our laptops and tablets. Pete and Kirsten had given us strict instructions not to make any comments about anything at the border, there were ears everywhere, so we all quietly filled in our forms, queued and queued again and did everything we were told to. Eventually we discovered they were concerned that we were a troop of travelling missionaries, which is illegal in Uzbekistan, and stifling our amusement we behaved ourselves, bit our tongues and got through the border safe and sound, with Rob only attempting to lead the group in a rousing chorus of ‘onward Christian soldiers’ once we were driving away.

At the border we met our guide Dilya and headed off for our first taste of Uzbek food at one of the many large eateries along the roadside, feasting on Laghman, Plov and Shashlik Kebabs before heading on to spend the night in the town of Margilon for some well earned rest, well, for most of us anyway – sadly Pete & Penelope had a long drive ahead across the Kamchik Pass where they would meet us in Tashkent the next day – the reasons for this are long and complicated – normally overland trucks have to head off on an epic border crossing marathon through Tajikistan and back to Uzbekistan to avoid it, but Pete decided, in the name of exploration and adventure, to see if he could get Penelope over the Kamchik Pass with no passengers in the middle of the night, which he managed with no hassles at all!

Meanwhile, back in Margilon, a fleet of local Daewoo taxis arrived to carry us towards Tashkent. En route we were treated to a tour of one of the local silk factories, from the chrysalises to the weaving we saw the whole process and once in the shop our local guide Dilya’s philosophy that ‘beautiful things make life more beautiful’ was all the inspiration many of the ladies in the group needed to buy some very pretty things.

We then jumped back in to taxis and on to Kokand to see the Khan’s Palace, built in 1873 by the Khudayar Khan who managed to rule from his shiny new palace for only 3 years before the Russians arrived and booted him from power. It was to be the first of many beautiful mosaic and majolica clad buildings we would see in Uzbekistan and a great introduction to what was to come.

Then to the Kamchik pass itself. Our taxis were driven by a team of very excited drivers, presumably used to working solo they were enjoying the opportunity to hang out together and check out who had the best passengers. They seemed to see the drive as a great chance to finally figure out who was the better driver so what ensued was akin to the Monaco Grand Prix only with more donkeys. At the top of the pass we all piled out the taxis and stopped for photos, while the locals and taxi drivers photographed us in return.

Then we headed on to Tashkent to the very welcome sight of Pete and Penelope who were feeling pretty pleased with themselves as they’d become the first overland truck to make it over the Kamchik Pass in a very long time.

After a brief stop in the capital it was time to head to the famous silk road cities. After so much camping in Kyrgyzstan, Uzbekistan was to be all hotels and cities and a great chance for us to recharge (ourselves and our various gadgets) and to feed our minds on a cultural, architectural and historical banquet. For many the silk road cities that lay ahead were the main reason they were here, Lyn in particular who was fulfilling a lifetime’s ambition after performing the poem ‘The Golden Road to Samarkand’ as a teenager.

The best known of the silk road cities, at Samarkand’s heart stands Registan Square, enclosed on 3 sides by 3 stunning Madrassahs (traditional Islamic colleges.) Dilya took us on a tour of the main sites of the city over 2 days, we took many photos of the incredible architecture, the beautiful gold-leaf clad mosques, and listened to stories of Amir Temur, (better known in the west as Tamerlane) and his dynasty who built and ruled the city and conquered a huge area stretching from Syria and Turkey to Northern India. I’ll let the photos speak for themselves here:

In the evening we experienced some more local culture at the impressive Restaurant Samarkand, where we were able to sample ‘afro men in shirts’ which turned out to be rye bread dipped in butter, cheese and a lot of garlic.

Whilst in Samarkand we were lucky enough to visit a silk carpet workshop, a joint initiative between Uzbekistan and Afghanistan, it provided training and work to local ladies who had a job for life if they wanted it, 3 years maternity leave per child and the opportunity to work alongside friends to chat, gossip, and make some incredibly beautiful silk carpets that we all wished we could afford, though some were won over by the slightly cheaper but no less beautiful silk embroideries.

After all that walking, eating, sight-seeing and shopping we relaxed in the evenings on our beautiful roof terrace at the hotel, watching the sun set over the domes.

So feeling thoroughly cultured we jumped back in to Penelope and headed on to Bukhara with a stop on the way at a ceramics workshop, Bukhara being famous for its ceramic work, we learnt about the process and visited the shop to carry on doing our bit for the Uzbek economy.

There was some discussion/argument between Pete and Kirsten about whether Samarkand or Bukhara is the better city, and whilst Samarkand is jaw-dropping and vastly impressive we were all immediately taken with Bukhara. A more intimate city with jumble of streets and squares and domes all piling on top of one another, you could walk around it for days and still find new things. Highlights included the enormous Kalon Minaret that is said to have impressed Ghengis Khan so much that he managed to restrain himself from tearing it down while he sacked the rest of the city

Bukhara’s Ark Fortress was built by the architect to gain the hand of the woman he loved, unfortunately for him her father married her off to someone else, but we are now left with a huge fortress complex to explore, the pictures don’t do it justice, mainly because it’s too big to fit in one photo!

Whilst in Bukhara Pete decided to educate us all on the subtleties and intricacies of vodka in Central Asia. So after sending the hotel staff on a mission out of town to stock up on 5 varieties (the sale of all alcohol except beer having been recently outlawed in shops in Bukhara) we gathered on the roof terrace as the sun set and full moon rose and voted on the different vodkas, the debates about which was best becoming more heated and less coherent with each drink.

And finally Khiva, we’d heard some stories about over-zealous Russian restoration work and little Khiva is often overshadowed by its big sisters Samarkand and Bukhara. Stuck out on the South-West corner of Uzbekistan you have to cross a desert to get there and drive some truly terrible roads but your reward is worth every bump and pot-hole. Khiva is a very beautiful city, its historic centre is surrounded by the old walls and gates and has been mostly pedestrianised which makes it a joy to wander around. It’s well set up for tourists with free western-style toilets – a highlight for many in the group who treated themselves to a 2nd coffee at breakfast! It feels and looks like a set for an Indiana Jones movie, you can get lost in its passages and lanes for hours. It has beautiful minarets, one unfinished which Pete rather unkindly refers to as ‘the stumpy minaret’ which is complete clad in mosaic tiles. The streets are lined with market stalls selling warm woollen socks and hats which was appropriate as winter had arrived overnight and in dramatic fashion, from 30c in Bukhara to just over freezing point in the morning in Khiva, but it did make for a very crisp, clear winter day and some beautiful light and photo opportunities.

All the Uzbek silk road cities have been heavily restored. The tile, brick and stone work are incredibly clean and the colours gleam in the blistering Central Asian sun. Some would argue that the work has gone too far, too much restoration has been done and some of the sense of age and history has been lost, but whatever your opinion its hard to not be impressed, particularly when the surrounding countryside is acres and acres of grassland, desert and brush dotted with small dusty towns. It wasn’t hard for us to imagine how travellers on the silk road in the old days would have felt arriving at their gates after days on the road.So now our time in Uzbekistan was drawing to an end, Turkmenistan is on the horizon for the group and South America is beckoning me (Emma, special guest blogger for Uzbekistan!) where I will be running Odyssey’s South American Explorer trip.  After 10 days of hotels and showers we are like new people, our fingernails are clean, our heads are full of history and culture, our wallets are lighter and the truck is heavier with all our purchases. Uzbekistan has been good to us.I’ll let James Elroy Flecker have the last word here, it seems only appropriate…

We travel not for trafficking alone;

By hotter winds our fiery hearts are fanned:

For lust of knowing what should not be known

We take the Golden Road to Samarkand

3 thoughts on “Mosques, madrassas & mausoleums – the best of Uzbekistan”