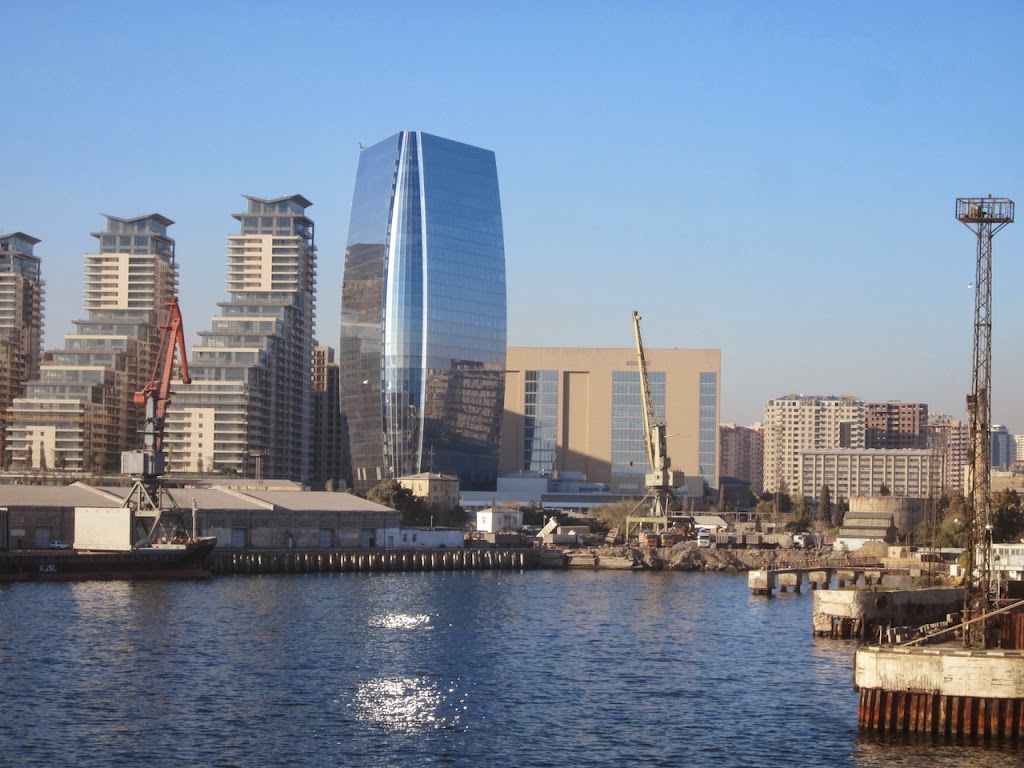 Our arrival into Baku coincided with peak hour on the roads – given the driving style of the locals, it proved to be quite a harrowing introduction to Azerbaijan’s bustling capital, with cars cutting in, queuing 5-wide on the 3-lane road, and police roadblocks to add to the excitement.  We were all very pleased to arrive at the hotel, the final hurdle being a dash across the multiple lane road to the hotel entrance – pedestrian crossings appeared to be as optional as indicators or sticking to your lane!

Once into the hotel, the main thing on most of our minds was food – the Caspian crossing had not been the most culinary of experiences, so we scattered across the city in search of cheap eats or perhaps a touch of luxury – the huge wealth of Baku and its large expat community ensures that almost any cuisine you can ask for is available, with ingredients often flown in from around the world – you often get the feeling in Baku that money is no object.

In the past 3 years, Baku’s waterfront area has seen a huge amount of development and, well, we think they have done a pretty good job!A walking tour the next morning gave everyone the chance to find out more about the history of this city, and our excellent guide provided plenty of information about what present day Azerbaijan is like to live in, and his views on where the country is heading, which was thoroughly enjoyed by all.

Leaving Baku after lunch, we headed a short distance up the coast to our bushcamp in a mud volcano field.  Pete introduced us to a traditional South African stew (potjie) and several bottles of vodka were consumed as we sat around the campfire to a soundtrack of the Rolling Stones.

Sunrise the next morning, over the bubbling volcanoes, saw us all reaching for our cameras once again.

Our next destination was the town of Sheki where we stay in a converted caravanserai (Silk Road hotel).  Small cozy rooms are set around a beautiful courtyard, the entrance foyer of the hotel must rate as one of the most impressive of any hotel we stay in around the world!

Sheki’s most famous sight is the Xan Sarayi, dating from 1762 it was used as the khan’s administrative building.  The decoration inside is incredible, unfortunately photographs inside are no longer allowed, so you will to take my word for it!

The next morning, we headed towards the border with Georgia.  Our time in Azerbaijan has been brief, but fascinating, particularly the contrast between the oil wealth of Baku and the rural subsistence lifestyle that remains in the country areas.

So what was the miracle in Azerbaijan?  Pat, our self-professed city-phobe finally fell in love with a city – so Baku certainly worked its charms.