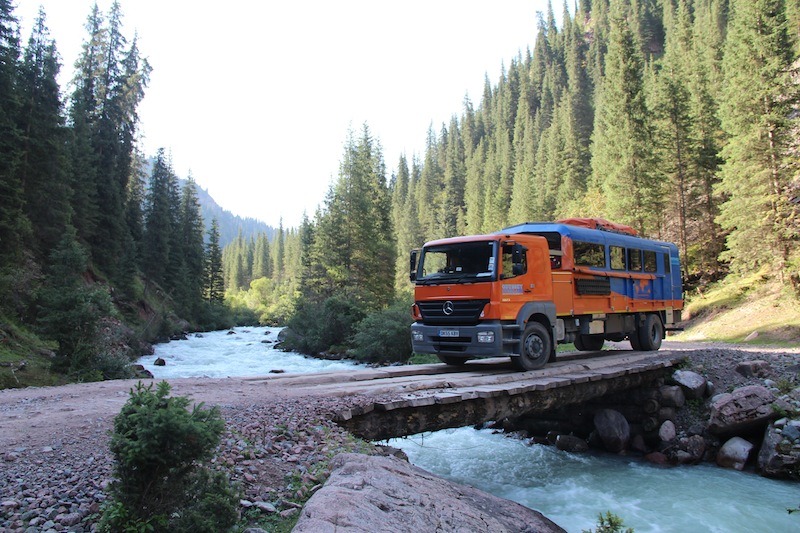 Where Uzbekistan is all about cities and history, Kazakhstan and Kyrgyzstan are all about nature and getting out and enjoying it, whether that be by hiking, horse riding or simply sitting in a comfortable camp chair gazing out over the lakes, rivers and mountains.

Our entry into Kazakhstan didn’t quite break the record, but it was still a full day extravaganza of hurry up and wait.  The group was processed quickly through immigration on both sides, but poor old Penelope had to wait in a queue of trucks (borders are the only place where it is acceptable to call her a bus, and that is only because we can then go through the faster queue, but not so at this border where the trucks had blocked both lanes!).  While we sat and waited first within the customs compound and then just outside the border sipping tea or reading in the shade.  With closures for lunch, new paperwork requirements and endless stamps to be obtained, it took a good 7 hours or so to get through, leaving us with a very late lunch and a short drive until we headed into the hills and found a lovely bushcamp in a valley.  We were visited by a local farmer with the most amazing gold smile and a heavily overloaded truck, but other than that, our peace and quiet was absolute, and we slept under a carpet of stars.

As we continued our drive through Kazakhstan we enjoyed a brief stint on fantastic new tar and concrete roads, but for most of the day we bumped and bounced across some pretty terrible roads!  Pot-holed tar and diversions aplenty!  We were rewarded with some beautiful scenery though, with our first glimpse of snow capped mountains that would stay with us throughout our time in Kyrgyzstan. We stopped briefly at the market in Taraz, continuing our exploration of Silk Road cities as this was an important stop along the route in times of old.  Nowadays it is home to a thriving clothing and fresh food market.

We found another lovely bushcamp in a field of wildflowers in the shadow of rolling hills that looked as if they were covered in dark green velvet.  A delicious dinner of roasted leg of lamb cooked over a fire in the potjie pot topped off the evening.

Farewell Kazakhstan, hello Kyrgyzstan, and this time a much easier and quicker crossing – in fact, a record-breaking 1.5 hours for us all, including Penelope, to be processed through the border.A short drive from the border, via a couple of statues (this part of the world certainly loves their big statues!) and we arrived in Bishkek, the capital of Kyrgyzstan.  Time to grab some lunch, relax by the pool and then head out on a walking tour of the city.

From Bishkek we bade farewell to cities for a while and headed for a bushcamp on the shores of Lake Issyk Kul.  This is Kyrgyzstan’s largest lake and the second largest alpine lake in the world (after Lake Titicaca in South America).  We returned to one of our favourite bushcamping spots, and set up camp on the sand.  The brave souls hit the water for a swim, while smoked trout pate (local lake trout) and risotto featuring oyster mushrooms from the fantastic food market in Bishkek was whipped up for dinner.

En route to our next stop, the stunning Diety Orgus gorge, we stopped off for a demonstration of traditional eagle hunting.   It isn’t always the case (on previous trips the bunny has made good its escape), but this time the magnificent eagle made short work of the kill, the bunny never knew what hit it.  Bunny 0, Eagle 1.

Diety Orgus, or Seven Bulls gorge, is one of our favourite bushcamping spots in the world – surrounded by mountains, with a river rushing through the valley and flat grassy areas to camp, it is a beautiful place.  We spent our first night in the gorge staying in traditional yurts (nomadic tents) and enjoying a bit of Kyrgz hospitality, before heading a little way down the gorge and setting up a bushcamp for a couple more nights.

During the day, plenty took the opportunity to take a walk or horse ride in the gorge, Gerti decided this was the place to get on a horse for the first time with much success!

It is an Odyssey tradition to have a party of some kind while in Diety Orgus, and this trip was no exception, with everyone donning traditional dress that they had found in the markets.  Accompanied by Ted’s mulled wine, and a delicious cottage pie and chocolate cake, it was a great way to celebrate being in such a special part of the world.

A hot shower (eventually!) awaited us in our homestay in Kochkor, but first we headed to a local felt-making workshop for an interactive demonstration of one of the traditional felting techniques.  Participation wasn’t voluntary as our eagle-eyed hostess ensured all of us were involved in at least one phase of the process – the part where you stamp, dance or jump on the rolled, damp felt to bind the fibres together accompanied by Uzbek dance music, Waltzing Matilda and Le Marseilles.  It would be fair to say that our felting skills were a little lacking!

Then it was time to head back to the mountains, our destination was the high altitude lake, Song Kul.  During the summer months, nomadic herders set up yurt camps along the lake shores and bring their flocks to these high pastures for grazing.  The drive up to the lake is lovely (although if you are afraid of heights, sit on the right!), we stopped to gather snow for the esky / cool box at the top of the pass, and then descended through a herd of yaks towards the lake.  Bumping our way through dry river crossings and along dirt tracks, we found our perfect spot and set up camp.

It is always cold at night up at the lake, and storms are fairly regular occurrences, but our first day was blessed with sunshine and blue skies – what better conditions for a game of goat polo?  The Kyrgyz national sport, this game which involves skilled horsemen, the carcass of a goat, a small square of blanket and no defined field of play – the game can literally go anywhere, and spectators must be on their toes and get out of the way if the horses come charging towards them – Ian found out the hard way, but fortunately no lasting damage done!  The local team were victorious against the team from the next valley, and we were all left in awe at the skill and bravery of the horsemen, several of whom came off their horses during the game, and many more would have had some spectacular bruises to show for their efforts thanks to the contact nature of the sport in full flight.

The next day the weather wasn’t quite so kind, a howling wind came through which felt like it came straight through from the arctic and brought with it the occasional unwelcome squall of rain as well.  Time to catch up on books and diaries, or for the hardy (or should that be foolhardy?), more horse riding and walking in the hills.

A cold windy night ensued, the weather abating to give us time for breakfast of French toast (to be topped with something sweet or something savoury, an endless source of debate), and then we loaded up the happily dry tents and headed back down to lower climes!  Fresh snow (in June!) on the hills high above us evidenced the wild weather, but descending to the town of Naryn saw us arrive into sunshine and t-shirt weather.  Hot showers, hearty meals and even a bit of wifi swiftly restored everyone back to good humour as we reflected on our stormy night in Song Kul.

A very relaxed start to the next day saw us leaving Naryn just after lunch, heading as close to the China border as possible.  After a quick stop at the carvansaray (old Silk Road hotel) in Tash Rabat, we found a lovely bushcamp spot overlooking a river, and enjoyed gnocchi and a campfire to use up our wood supplies.  A beautiful clear night, a spectacular moon rise, and a great way to farewell Kyrgyzstan.

Next stop, our final country on this expedition – China!