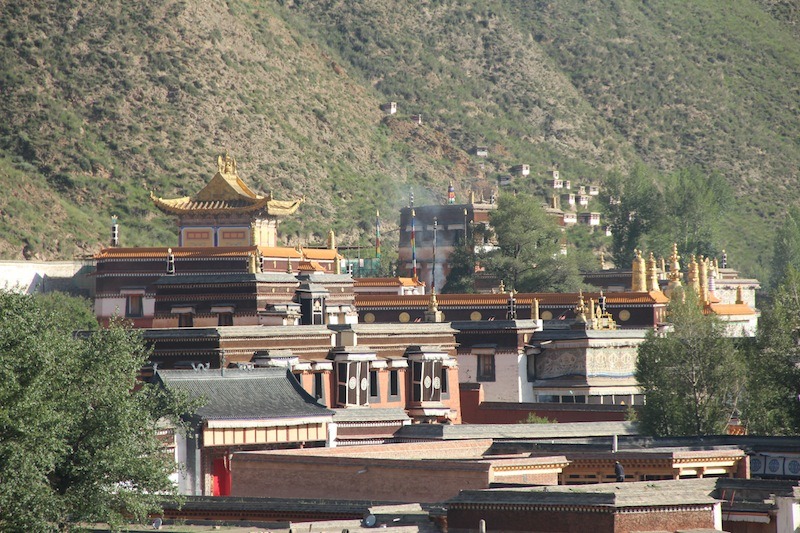 Roadsigns in China can amaze, astound, amuse and confuse at times – but as we wound down the stunning valley from the town of Xiahe in the Gansu province, we were greeted with a sign welcoming us to the area and promising a “Joyful Journey, Wonderful Land” – and our first couple of weeks have lived up to that as we have enjoyed a fantastic range of experiences, sight and tastes since we entered China.

After a relatively pain-free Torugart Pass border crossing (a border that always takes a whole day, due to the distances involved between checkpoints, but can be a very tense and difficult experience depending on the officials on duty), we headed for the city of Kashgar.  Although officially now in China, the strong Central Asian influence is clear.  For the two days that we had in Kashgar, the group walked the town flat, exploring the old city, the Id Kah mosque, and especially the markets, picking up some wonderful Afghan carpets.  Our first destination in China was proclaimed a big success and we headed off into the Taklamakan Desert excited about what else China had to offer.

A brief overnight stop in an amazing hotel in Kuche which had a lush arboretum in the centre which included a pond (complete with giant koi carp and a terrapin or two) and an ever-blooming (ie fake) cherry blossom tree.  After a fairly late arrival, we all headed to the hotel’s restaurant with its super-helpful picture menu.  Breakfast the next morning was our first experience of a genuine Chinese breakfast (having stuck to the staples of fried eggs, yoghurt and bread while in Kashgar), which left many a little underwhelmed (and peckish).  The coffee and tea drinkers amongst us were relieved when we headed straight to a service station outside of town for iced tea and iced coffee.

Turpan is the hottest town in China.  Turpan in summer can feel like the hottest place on earth!  But fortunately for our drive into town and most of our time there, the clouds kept the temperature down a little.  In the relative cool of the early morning, we headed to the Jaiohe ruins, one of the best preserved ancient cities in China.  Established as a garrison in around 100BC, at its peak this city was home to 6,500 residents.  The afternoon was spent on a tour of the irrigation canals (karez), and a brief visit to Grape Valley.

In the evenings, the city comes alive with people enjoying the cooler temperatures.  The lovely grape-vine covered walkways are great to wander along, with kids on rollerblades weaving in and out, old men sitting at small tables talking and playing cards, and families out for a stroll.  The night market is also a great place to go, with Central Asian-style shashlik, Chinese style hotpots and dumplings, and cold beers or chilled local red wine to wash it all down with.

Leaving Turpan behind, we headed back into the desert, and to a great bushcamp where views of snowy mountains seemed so at odds with the desert and heat we were enjoying!  Some of the group were dubious as to the merits of this camp, but as the temperature dropped, the magic of this spot revealed itself, with stars overhead (an increasingly rare sight as we head east towards Beijing), a stunning sunset over the peaks and the wonderful silence of the desert at night.

On to Dunhuang, an oasis on the Silk Road, set amongst sand dunes.  The folk story of how Dunhuang became an oasis is represented in many of the art works at the spectacular Mogao Caves, as well as forming the framework for an impressive acrobatic show we enjoyed on one of our nights in this great town.  The night market is good fun, dumplings and “hamburgers” – finely sliced pork with a delicious sauce and fresh herbs, served in a round bread roll.  The local speciality is donkey meat, although don’t think we had any takers…

As we left Dunhuang, we also left behind the route followed by our Istanbul to Singapore and Kathmandu to Istanbul expeditions, as we continue east towards Beijing continuing to follow the ancient Silk Road.  We headed first to Jiayuguan – in ancient times this was considered to be the edge of “civilisation”, with only the “uncivilised” tribes of Central Asia beyond.  If you were exiled, they opened up the western gate of the impressive fort and waved you off into the desert.  Don’t think the exiles lasted too long in the inhospitable desert.

After touring the fort, we headed to a great bushcamp, behind a ruined section of the Great Wall.  Kicking a few (ok, quite a few) stones aside to get a sandy base for tents, we cooked shashlik and smoked tofu over the campfire and had a delicious cherry tomato salad and snake bean stir fry to accompany.A very short drive took us to two sections of the Overhanging Great Wall – so named because they seem to head up into the sky.  A bit of exercise for the morning as we climbed the stairs of the first section for great views from the top, most of us forgoing the stairs for the second section, preferring to visit the beautiful Taoist and Buddhist temple instead, with a quick stop off at the Silk Road statues paying tribute to those who forged and travelled this route so many years ago.

In Zhangye, which was Marco Polo’s home for a year on his Silk Road travels, we celebrated Bob and Colleen’s 40th wedding anniversary with a feast of local dishes in a private banquet room.   A “how well do you know each other” Q&A session hosted by Marienne made a 41st anniversary seem unlikely when Bob incorrectly identified Colleen’s eye colour (there is some suggestion he was set up…), but gave us all a lot of laughs, and it was a fun night of celebration with a ruby theme.

Bushcamping on the edge of the Liajiaxia reservoir we were treated to an epic storm!  Fortunately after we had all retired to our tents, but the intense and seemingly never ending lightning and thunder meant sleep was a bit unlikely for a couple of hours!

We all survived the night!  A little sleep-deprived, and a bit on the damp and muddy side, we loaded into the truck for a short drive back to the ferry port for our boat trip to the Bingling Si Grottoes.  These Buddhist caves date  back thousands of years, but it was during the Tang Dynasty that they expanded into the impressive collection of over 200 separate sculptures and painted grottoes.  Wandering the grottoes and temples for a couple of hours was fantastic, rated as an overall trip highlight to date by at least one member of the group!  The boat trip to and from the grottoes was a wonderful part of the experience, surrounded by stunning scenery and towering cliffs.

After a simple noodle lunch costing (less than a dollar a bowl), we loaded onto Penelope for another boat trip, this time on a car ferry.  The rain that had held off while we were at the grottoes decided to make its presence felt while we were on the boat, and as thoughts started to turn to a soggy night of camping ahead at our intended bushcamp, Pete and Kirsten decided to break the good news that we would be heading to Xiahe (and a hotel!) one day early.  Spirits lifted and as we drove through torrential rain for a couple of hours, plus a small rockslide caused by the heavy rain, it seemed to be a very good decision!

Xiahe, also known as Gannan, is a Tibetan enclave which is home to one of the most important monasteries in Tibetan Buddhism, Labrang Monastery, which was established in 1709.  As soon as we arrived, it was clear that this town had a very different feel – with red-robed monks and traditionally attired pilgrims and locals walking the streets, prayer flags high on hills, and Tibetan clothing and accessories for sale throughout town, the town’s Tibetan heritage and traditions were clearly visible.

An early morning wake-up call saw the group heading off with our fantastic local guide, Sophie, in order to walk the kora a 3km path around the monastery where, every morning, the devout walk and spin the hundreds of prayer wheels.  Seeing an older man prostrating himself in front of every prayer wheel along the kora is a humbling demonstration of spiritual devotion.

The monastery had been largely destroyed in the 1950s, and fell into disuse during the 60’s and 70’s, but it is now very much a living, breathing community with a population of around 1,000 monks who live and study there.  Monks conduct popular tours of the monastery complex itself, or you can wander through the streets of the monastery where monks are going about their daily business.  The temples are elaborately and beautifully decorated, and peaceful, the spirituality of the whole complex is almost physical in its presence.

Wandering the monastery, shopping for Tibetan souvenirs, enjoying Tibetan food such as momodumplings and soaking up the atmosphere was a great way to spend a couple of days up in the mountains and to experience a very different culture within China.

Leaving Xiahe, we headed to the centre of China, Lanzhou, where we enjoyed our craziest night market of the trip so far!  By day, it is just a normal shopping street, by night, it is wall-to-wall food stalls and a heaving mass of people – forget personal space!  A wide variety of food was on offer, including delicious hot pots, fresh seafood, bacon & egg pancakes, queue-worthy chicken wings and unidentifiable innards…

Next major stop, Xi’an and the Terracotta Warriors!