Exploring the Silk Road in Uzbekistan 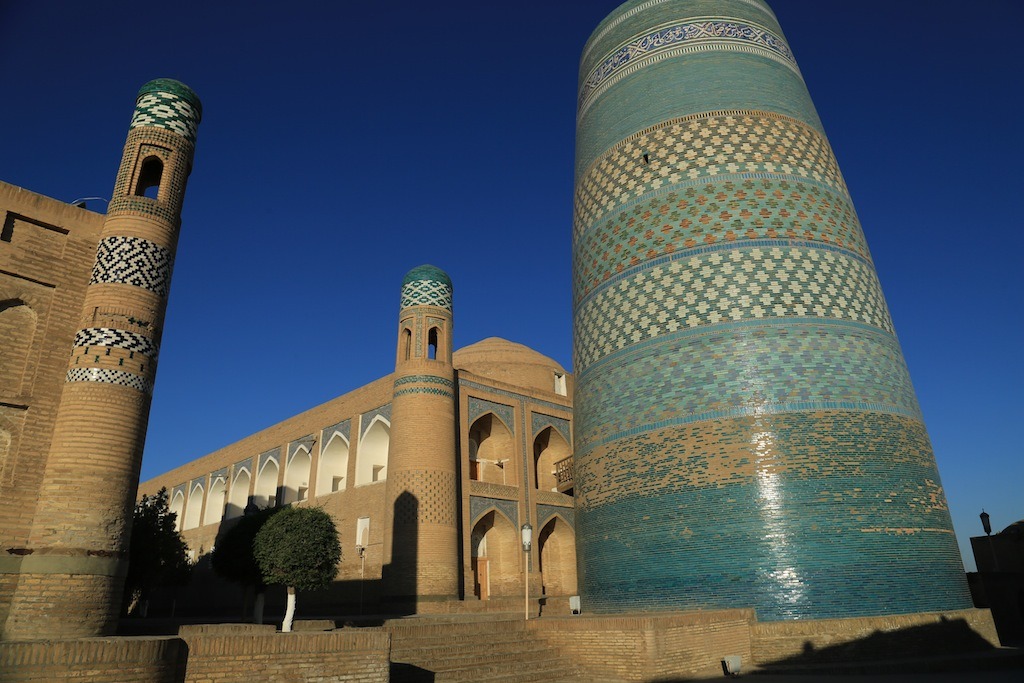 The ancient trading route of the Silk Road was what many of our group had joined the expedition to see.  Although our Silk Road experiences had started from the very beginning of the expedition, including our stay in a caravansaray in Azerbaijan (one of the old hotels used in the times of camel caravans plying the Silk Road), and will continue through to our journey into China, it is the cities of Khiva, Bukhara and Samarkand in Uzbekistan which are the most visually impressive remnants of times gone by.

After our night at the incredible Darvaza burning gas crater, and camping in the Karakum Desert, we headed north into Uzbekistan.  If you have followed previous blogs, you will know that the border crossings in Central Asia can often be quite protracted affairs. Think long queues; lunchtime closures of at least an hour, sometimes two; endless paperwork with the added excitement of very strict rules as to the way in which forms can be filled in (any mistakes mean doing another form, there’s no crossing out here!).  Heading into a border crossing in this part of the world means packing your patience, sense of humour and a good book to keep you amused during the inevitable waiting.  On the whole, the border officials that we meet are friendly, helpful and curious, but they still have a job to do and that can mean they enjoy the pleasure of our company for several hours.  Occasionally however we do come across someone who appears to be intent on making the border crossing as painful as possible for us!  It is usually on entering a country that we are subject to in depth inspections of the truck, but it was on exiting Turkmenistan that we had our most thorough search every (and Pete’s most thorough search in 14 years of overlanding!).  After 3 hours of prodding, poking, unloading, scanning and searching of Penelope, we were finally free to leave Turkmenistan and cross to the Uzbekistan border which fortunately proved to be a much easier and quicker process!

We rolled into Khiva just as the sun was setting and everyone headed off for a bite to eat, and a shower to de-desert-ify themselves.  Our hotel is an old 19th Century madrassa (Islamic university) located in the old town itself, under the shadow of Khiva’s most identifiable landmark, the turquoise-tiled Kalta Minor minaret.  Construction on this minaret started in 1851, and it remains unfinished due to the death of its sponsor, but it is unique amongst all the minarets in Uzbekistan because it is tiled for its entire height.While Khiva, Bukhara and Samarkand are all wonderful cities to wander aimlessly and enjoy the incredible architecture and decoration, doing a tour of these cities with a specialist guide brings them to life as you start to understand the purpose of the buildings and their historical context.  With invasions, conquests, power struggles and slaves all featuring heavily in Khiva’s past, it is a fascinating history to get to grips with and our guide was rated by some as the best guide they have ever had – high praise indeed!  All three of these cities are a photographers paradise, so we will let the photos do the talking!

Our next stop, Bukhara, is more of a living city – although it has an equally interesting history, it feels less like a museum than Khiva, and is more compact and concentrated than Samarkand. In the evening, the place to be is the Lyabi-Hauz (meaning “around the pool” in the Tajik language) just a 100m or so from our hotel – where restaurants fill with locals and foreigners alike, all enjoying the cooler evenings with a shashlik (meat skewer) and maybe a vodka or two.

In Samarkand, the modern city has interwoven itself into the historical city, providing quite a different feel from both Khiva and Bukhara, but it is home to two of the most visually impressive sights, Registan Square (which is claimed to be the most impressive site in Central Asia) and Shah-I-Zinda mausoleums.

With all of the history we had been immersed in for a week, it was a nice change to visit a traditional paper-making workshop.  Mulberry trees provide the raw materials which are then boiled, pounded and pressed into gorgeous sheets of paper which is said to last for a thousand years.

Our final stop in Uzbekistan was the city of Tashkent.  Largely rebuilt in the 1950s after a devastating earthquake it is home to wide leafy boulevards and impressive marble buildings as well as plenty of Soviet-era concrete apartment blocks.  It is a city to wander, enjoying the parks and relaxed feel that this, the largest city in Central Asia, has managed to retain.  It is also home to what is claimed to be the oldest copy of the Koran in the world.

For those for whom the prospect of another plov (fried rice), lagman (noodles either served in a soup or with a bolognaise style sauce) or shashlik was just too much, Tashkent also offered the chance for a bit of international cuisine – Korean, Italian, Japanese, Indian – it’s all here!

With all these cities under our belt, it was time to head back into the wilderness of Kazakhstan and Kyrgyzstan.  But more on that next time!

A big THANK YOU to all the expedition members who have contributed their photos to this and previous blogs – Bob C, Neil, Ian, Sandy