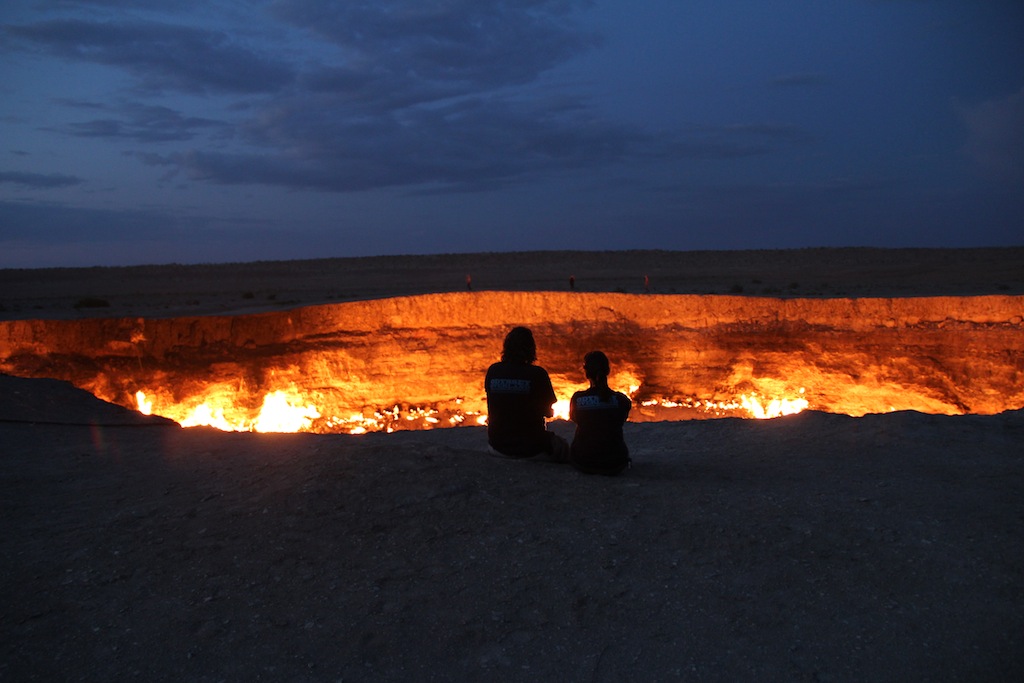 So we head for another strange sounding country Azerbaijan – not visited by many tourists each year but a vital part of the old Silk Route. After a somewhat protracted border crossing we hit the road towards Sheki where we would be staying in an old Carvansary for the night.  Sheki was a major stop-off point on the Silk Road and our home for the night was a Silk Road hotel / trading post / resupply point and safe haven for the caravans in Silk Road times. With its rose-filled central courtyard and wonderful shady restaurant everybody soon settled in.

The town it self is great to wander with a nice central square full of old men drinking tea and discussing life in general. The big attraction though is the amazing Khan’s Palace set within the old walled city just up the road from the hotel. The building took two years to build after which they took an additional 8 years to do the intricate wood and stained glass latticework and paint the amazing frescos on the moulded ceilings and walls. Some chose to have a local guide explain it all and others chose just to wander through.  No photos are allowed these days, but we have a couple from an earlier trip to give you an idea of what they were getting to see.

From Sheki we headed towards the Caspian Sea coast and after a bit of a drive around (thanks to the new road network!) we finally bounced our way up a steep track to our bushcamp for the night.  Set on the edge of a field of active mud volcanoes with a 180 degree view out over the Caspian Sea, we were lucky enough to watch the sun set and then the “super moon” rise, a spectacular sight.

Early the next morning we headed for Baku the capital city of this oil and gas rich country with amazing buildings, fast cars and luxury boutiques that feel very out of place compared with the more traditional villages and countryside we had been driving through. When we arrived the city was in the midst of preparing for a massive military parade which saw it seem like all the roads we wanted to drive down were blocked off!  The seafront boulevard was packed with various military vehicles, rockets and heaps of other imposing machinery.

As soon as we arrived we headed for the Turkmenistan consulate to get our visas. Visas in Central Asia are very impressive sticker plastered into your passport which take a fair bit of work to get.  Luckily our local fixer knew the consul and even though it took close to 5 hours we got our visas in record time.

This though was only the start of our adventure, while the group headed to the hotel, Pete headed down to the port to find out about a cross Caspian ferry. This ferry journey is always an unforgettable part of the adventure as schedules, plans and luxury cruising do not feature in this part of the world! After being checked out by the large-hat wearing Customs and Immigration officers we headed to the ferry ticket office.

This small building would be impossible to find unless you had been here before, or someone pointed it out, but after a couple of knocks we were admitted to start the haggling to get onto a ferry to Turkmenistan.  One would imagine that the port ferry captain would have a fair idea of when the next ferry would sail, but it seemed not.  After much discussion it was decided that yes there may be a ferry that day, but they were not sure, but we should part with large wads of dollars and buy our tickets anyway.  After a lengthy process the tickets were waved at us and an amount was mentioned which in no way reflected the amount on the paper.  Strange you would say but very normal and after a bit of negotiation we finally settled on a figure. As soon as they had the cash then it seemed as if by some miracle the ferry had arrived and taxis were sent to collect the group and get the show on the road.  So we were all aboard and ready to roll, won’t bore you with all the details but suffice it to say, we finally set sail 8 hours later with the highlight being the military parade practice fly-by of about 50 helicopters and 30 Russian Mig fighters, some which seemed to be making rather a lot of black smoke as they flew by.

Our sail across took us about 30 hours as for some crazy reason we sailed across using only one motor but finally after two nights on board we docked in the port of Turkmenbashi ready to explore Turkmenistan.  Entrance to Turkmenistan is not easy and it took about 4 hours for us all to be processed, but finally we were in.

On to Ashgabat a crazy city of marble and French designed buildings, will let the pictures do the talking but to give you an idea the President built a five-storey wedding palace for his people so that they could also get married in a palace – enough said.

After two nights in the capital we wandered north again into the desert, en route stopping off at the huge bazaar on the city’s outskirts for a bit of shopping.  The entire bazaar has been rebuilt using the all-essential Turkmen white marble and is all neat and tidy which is great for the locals, although lacking the character that the old market possessed.

Our destination though was the burning gas crater of Darvaza a deep in the desert. We arrived and set up camp and then transferred in by jeep to the crater.  Pictures do not really do it justice, but some great shots below.  A truly unforgettable sight.

From here we headed north to the border and into Uzbekistan but more about the Silk Road cities in the next blog.