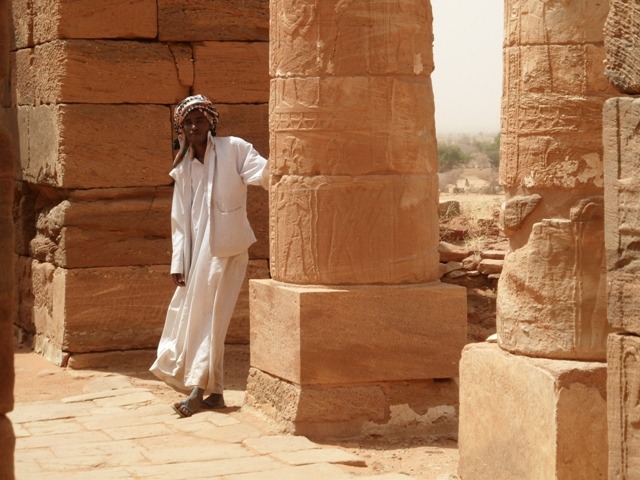 Immediately upon crossing into Sudan, the differences from Ethiopia were evident.  Another country with a troubled past and present, but with a different culture and approach, the results seem to be so very different.  Where Ethiopia is mountainous and the majority is at a fairly high altitude, Sudan is predominantly flat and sits only a few hundred metres above sea level.  Where we were constantly approached and at times hassled by touts in Ethiopia, even in the border town we were regarded with curiosity in Sudan, then people continued on their way.  Begging disappeared almost completely, and the friendliness of the people in Sudan cannot be overstated.  Just crossing a road you will be greeted with someone leaning out of their car yelling “Hello, welcome to Sudan”.  Even the policemen were friendly “Where are you from?  England?  I love England!  Welcome to Sudan, I hope you enjoy my country.”  After the challenges in Ethiopia which had worn everyone down to varying extents, Sudan presented a breath of fresh air and gave the group renewed energy and enthusiasm.

The recent referendum to split the country into two (roughly north and south, but obviously a little more complex than that), is effectively formalising arrangements that are already in place.  In order to visit Southern Sudan, a separate visa is required, and they keep separate consul offices in various neighbouring countries.  In time, southern Sudan will again be a safe destination, but for the meantime, we would be spending all our time in “northern” Sudan, well away from troubled areas such as Juba and Darfur.

Our first stop in Sudan was a bushcamp en route to Khartoum.  Bushcamping, or wild camping, is rated as a highlight of any of our expeditions, and this particular bushcamp was spectacular, and a fantastic start to our time in Sudan.

Next stop – Khartoum.  The capital of Sudan, this is a bustling metropolis.  On the drive into the city, the road is flanked on both sides by huge factories, and as we got closer, by luxury car garages and fancy shops.  Oil money has flowed into the city, and brought with it the trappings of wealth, but underneath it all, Khartoum remains a fairly sleepy, friendly and safe capital, and a great place to spend a couple of days.  We camped at The Blue Nile Sailing Club on the banks of the Blue Nile – an incredible location to watch the river flow by, accompanied by a cold mango juice (well, a G&T would probably have been better, but Sudan is a dry country, with the penalty for possession of alcohol being 40 lashes, something none of us were keen to risk!).  Khartoum has a couple of interesting sights, but for many it was a nice chance to catch up on washing, journals or internet, or to have a wander around.  A taxi ride away from the campsite is the Omdurman Souq, Sudan’s largest market.  With virtually anything you want on sale there, it is fascinating to wander around and chat to the stallholders.  Terry and Robin went one further, purchasing the traditional gallabaya and caps worn by the local men, perfect attire for Robin’s birthday dinner of burgers and potato salad that went down a treat!

Leaving Khartoum behind, we headed north to the Temples of Naqa.  There are tar roads throughout most of Sudan, but where is the fun in that?  Athena isn’t afraid of the sand, so we headed off through the desert towards the temples.

Dating from the first century AD, the purpose of the temples at Naqa is unknown.  They are some of the best preserved examples of Kushite buildings in Sudan, and while the sand is slowly reclaiming them, many of the carvings and statues are still in very good condition.  Much of the symbolism is similar to that found in Egyptian temples, with the avenue of rams leading to the Temple of Amun being similar to those found in Karnak in Egypt, and there are also influences from Greek, Roman and Persian cultures.  Tourism is still relatively rare in Sudan, so we were the only visitors to the temples while we were there and we were free to wander around accompanied by the silent ghaffir who had collected our entrance fees.

Situated between the two temples at Naqa was a fascinating insight into one of the hardships of desert life.  Located far from the Nile, water is an even more precious commodity out in the desert, so the well provides water for people and their livestock.  Surrounded by herds of cattle, sheep and camels, it is the role of the donkeys to pull the water up out of the well.  Each person brings their donkeys and rigs them up to a crude rope and pulley system, and then walks the donkeys back and forth for about 100m, pulling water up in goat skin bags.

With Athena released from the sand, we found another lovely bushcamp.  Far away from the nearest lights, the night sky is carpeted with stars.  When to go to bed?  After the next shooting star?  Ok, just one more…

The Temples at Musawwarat es Sufra are the largest set of Meroitic remains in Sudan.  Again, the purpose of these temples are unknown (the Meroitic language has never been deciphered), but it is suggested that this was a pilgrimage site.  The Great Enclosure, although largely ruined now, was a huge complex of temples and other buildings such as throne rooms.  Intricate carvings remain, and there is also a museum with, unusually, some explanations of symbols and the buildings themselves, in English!  A short walk from the Great Enclosure is the Lion Temple, better preserved and in part restored, it is a striking building with wonderful internal and external carvings.

Another short drive through the desert brought us back to tar roads as we continued north to the most visited historical site in Sudan.  Formerly the capital of the Kushite Kingdom, Meroe is home to the pyramids of the Royal Cemetery.  Unfortunately defiled by early Italian explorers in search of treasures, these mainly top-less pyramids are very different from their Egyptian counterparts.  Smaller in size and steeper in angle, they were built on top of the graves of kings and nobles, not encompassing the graves as in Egypt.  Again, we were the only visitors to the site when we first arrived, and so we were free to wander the site, free also of the touts that are awaiting us in Giza in Egypt!  Jeanne, Lynley and Rogan took the opportunity to take a camel ride around the pyramids, while others braved the hot sand and explored on foot.

Just around the corner from the pyramids we camped up next to a sand dune, spectacular views and great photo opportunities!

Continuing across the desert on what used to be a sandy track but is now one of the smoothest tar roads we have been on, we arrived at Jebel Barkal (“holy mountain” in Arabic).  Climbing to the top took a bit of effort in the hot afternoon sun, but the views at the top were spectacular and the best way to appreciate the ruins below.  Jebel Barkal is also home to the best preserved of Sudan’s pyramids, fortunately no Italian explorer chopped the top off these ones!

Turning off the tar road we headed into the sand dunes to find a bushcamp for the evening.  What looked like nice hard sand proved to be a little too soft for Athena and after she sunk down a little – normally nothing that a few sandmats won’t fix, unfortunately this time the sandmats conspired against us to rip off the bracket holding the air tanks – an almighty hiss ensued, but what sounded like disaster to begin with just required a bit of handiwork from Pete and Rogan to fix, while Kirsten and Cook Group 2 sorted out a lamb roast feast!

Continuing further north, we had one more amazing bushcamp before reaching Wadi Halfa where the ferry would take us to Egypt (the ferry is an adventure in itself, sure to be the source of many stories told back home!).  Camping on the shores of Lake Nasser gave those who were willing to brave the cold water the chance to have a bath, quite an exciting prospect as our last showers were in Khartoum!

Wadi Halfa is often described as somewhere that you only go to to get to or from Egypt, but we think that is a bit harsh as the town has a lovely souq (market), great fish and chicken is served in the restaurants, the fastest internet we have had since Kenya, and of course, the friendly people that we have experienced all through our time in Sudan.  Despite being a border town, it doesn’t even suffer from the pushy touts that seem to plague border towns the world around!  We scheduled our arrival into Wadi Halfa for a couple of days before the ferry was due to leave for Egypt to give us time to sort out truck paperwork etc and it was a good job we did.  Due to mass evacuations of Sudanese and Ethiopian citizens from Libya and Tunisia via Egypt, the ferry which normally only runs once a week is currently running back and forth as often as it can as they move an estimated 250,000 people south.  For us this meant that we were able to get into Egypt a day early, giving everyone a bit more time to explore the ancient treasures of the final country on our Odyssey.

PrevPreviousChurches, mountains and challenges – welcome to Ethiopia
NextCape to Cairo in 26,020km and a couple of adventuresNext