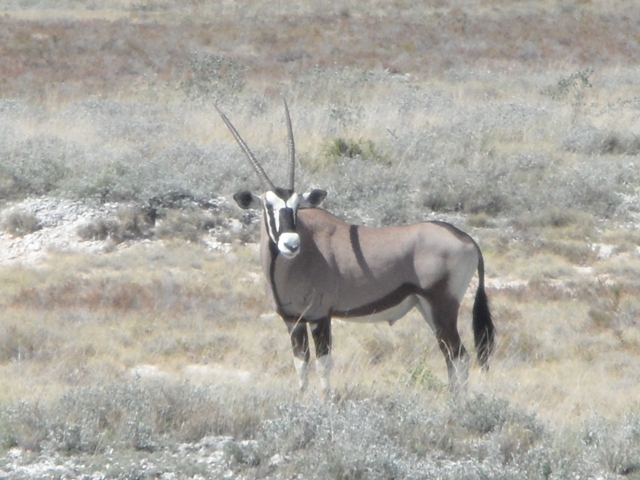 Firstly Odyssey would like to wish everyone a very merry Christmas and all the best for 2011.  We celebrated Christmas at Victoria Falls, and then we will be celebrating New Year’s Eve in South Luangwa National Park in Zambia – both are incredible destinations where we stay at great campsites and will be probably (ok, definitely) having a bit of a party!

But what have we been up to since the last blog?

Our first stop after Swakopmund was the Cape Cross Seal colony – home to an estimated 100,000 Cape Fur Seals, it is a sight (and sound!) to behold, particularly as the pups have all just been born and are so very cute!  It is also fascinating to see how the pups are arranged into nurseries, while the adults head off to search for food, the pups are corralled and guarded by other adults.  Unfortunately the internet doesn’t allow me to share with you the smell of the place…

Leaving the Atlantic Coast we headed inland to Spitzkoppe.  Called the “Matterhorn of Africa” it is a spectacular rock mountain which rises from the plains.  We camped in its shadow and many spent the afternoon clambering up the rocks and watching the sunset.

Our next destination, Twyfelfontein, meaning “doubtful spring”, is famous for its bushmen rock carvings.  This was the site of bushmen gatherings as far back as 6,000 years ago, and the rock carvings are said to serve a variety of purposes, from teaching young children about the animals, to sharing information about where to hunt as well as passing on folklore. The area around Twyfelfontein is also where we had hoped to see the desert elephant who have specifically adapted for the harsh conditions, but they were proved too elusive for us unfortunately!

Heading further north it was time to get back to game viewing.  Etosha means “Great White Place” as the Etosha National Park is dominated by the Etosha Pan which is mainly dry except after heavy rains when it floods from rivers to the north.  It is home to four of the Big 5, with only buffalo missing, and on one game drive alone we saw lion, rhino and elephant.  Giraffe are always crowd-pleasers, and Etosha has hundreds of them, along with huge numbers of plains game like zebra, blue wildebeest, gemsbok and impala.  We also saw our first hyaena for the trip, and the tiny antelope, the Damara Dik Dik.  And we had some excitement when a Boomslang decided to catch a ride for a while, but fortunately it dropped off before we had to go hunting for it in the chassis!

A great feature of all of the campsites in the park are the floodlit waterholes which gave the group their first sightings of the more elusive black rhino, as well as plenty of white rhino.  Etosha is considered to be Namibia’s top national park, and it certainly didn’t disappoint!

It was an early start when we left Etosha and a long drive as we headed towards the Caprivi Strip on our way to the Zambian border.  The Caprivi Strip is a small sliver of land bordered by Angola, Botswana and Zambia and our stop for the night was the wonderful Ngepi Camp, situated right on the banks of the Kavango River.  The camp has a funky bar, a croc and hippo-proof swimming cage in the river, shady grassy areas for the tents, very unusual ablutions and a great vibe.  Sitting on the deck overlooking the river, watching the hippos graze and swim while the sun set it was just about perfect and a great end to our time in Namibia.

Leaving Namibia behind we headed into Zambia and after a better than expected roads and a quicker than expected border we decided to push all the way through to Livingstone and our campsite on the banks of the Zambezi River.  Our main reason for being here was to visit the spectacular Victoria Falls and have a chance to do some of the many adventure activities on offer, but it was also our chosen location to celebrate Christmas.  For some of the group it was their first hot Christmas (definitely no snow here!), for others it was their first Christmas away from home and family, and for others, Christmas is always a time to travel… but for everyone it was a day to celebrate, get out your posh frock (or just clean shorts), don a paper hat and laugh at corny jokes.

But before the celebrations could begin, a group of us decided to get a little adrenalin flowing through our veins by heading off jetboating on the Zambezi.  It was simply the best way to start Christmas and we returned to camp with smiles a mile wide.

For Christmas lunch we decided to let someone else do the hard work, and while things didn’t go quite to plan, at least we didn’t have to do the washing up!  The lunch table was the venue for our Secret Santa unveiling – as your name was called it was time to sit on Santa’s knee to open your present…

Hope you all had a Christmas as merry as ours!

PrevPreviousCanoes, sandboards, quadbikes and aeroplanes
NextThe journey and the destinationsNext