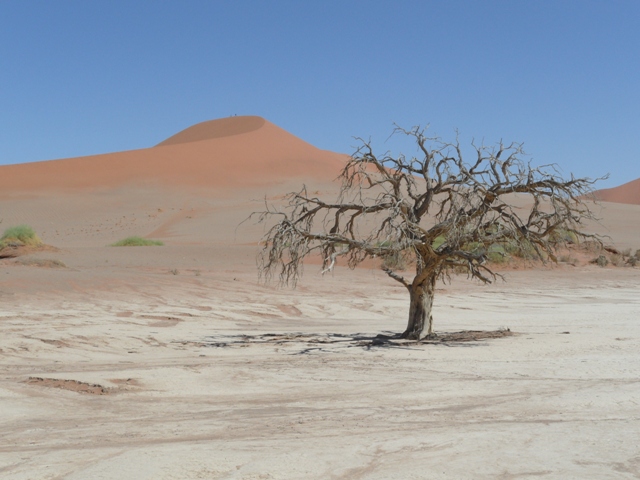 Our crossing into Botswana from Zimbabwe was very straightforward, and then we headed for a campsite where we were hoping to be able to go out on quadbikes to see the salt pans, however the weather wasn’t playing along and due to recent heavy rains they weren’t running trips, so instead it gave everyone a chance to chill in the funky bar and swimming pool under the shade of a massive baobab tree.

The next day saw us drive through the Nxai Pans National Park where we saw elephants and giraffe in the distance, and then a rather grumpy bull elephant meant we had to stop and wait for him to calm down as we were a bit concerned he was going to take on the truck!  Eventually he decided that the big blue and orange truck was a bit too scary for him and he retreated, allowing us to continue on our way.

No trip to Botswana would be complete without visiting the incredible Okavango Delta.  The Okavango River starts in Angola and runs briefly through Namibia before culminating in a maze of lagoons, channels and islands.  Wildlife is drawn to the delta, including all of the Big 5 plus an abundance of birds.  Some of the group chose to do a scenic flight over the delta, which showed an abundance of wildlife accompanied by stunning scenery that looked exactly like the postcards!

The next day we headed out on mokoros, traditional dug out canoes and spent a night camped on an island in the delta.  After a relaxed lunch in the shade we set out on a game viewing walk in the hope of seeing the Big 5 and the many other animals that call the islands their home.  With the sun still fairly high in the sky, we didn’t get to see too much in the way of life as the animals all seemed to be hiding, but it was a great chance to stretch truck-weary legs.  With the only source of light being the campfire and a couple of head-torches, it was an early night for everyone.  The next morning, as the sun first started to show itself, most of the group headed off for another game walk, this time more successful with excellent sightings and close encounters with zebra, wildebeest, impala, hippo, elephant, the relatively rare red lechwe (antelope), as well as warthogs and many birds including the striking fish eagle.  On the way back to camp we saw a crocodile, which certainly made swimming in the delta a less attractive option despite the heat, and we waited for the swimming pool at our campsite instead!

Leaving Botswana behind we had a long day in the truck as we crossed into Namibia and headed towards the capital, Windhoek (literally, windy corner). We stopped for the night at a campsite just outside the city, and the next morning we were able to eat our breakfast while watching giraffes grazing on the hills below!  Just another day in Africa…

Namibia is one of the youngest countries in Africa, but is also home to one of the oldest (and driest) deserts in the world, the Namib Desert.  This was our next stop and we camped for two nights on the edge of the Namib Naklauft National Park.  We enjoyed sundowner drinks at Sesriem Canyon and then the next morning it was our earliest start yet as we set off for the famous Dune 45 and Sossusvlei at 4.30am!  The reason for the early start is to try to get to the top of Dune 45 to watch the sunrise and after a lot of huffing and puffing we all made it up to the top after a 20 minute slog up the dune. The views from the top were spectacular, and as the sun rose, the colours really came to life.  While walking up was a slog, coming back down was much more fun and took much less time as we were able to run straight down the face of the dune (or in Leigh’s case, roll down). A quick breakfast and we continued further into the National Park heading for the famous Sossusvlei.  We stopped off at the unattractively named Dead Vlei (vlei translates approximately to swamp, although these particular swamps are flooded only very occasionally) and had a wander through looking for the desert-dwelling animals.  What initially appears to be a completely barren and inhospitable landscape slowly reveals itself to be host to a wide variety of animals from antelope to beetles specifically adapted to survive the extreme weather.  It was a fascinating place to wander around for a couple of hours before we headed still further into the park stopping at Sossusvlei which is photographers paradise with a particularly well-positioned tree and sand dune combination!

Our itinerary for our Cape to Cairo expeditions certainly doesn’t take us the most direct way as we start on the Atlantic Ocean coast, travel east to the Indian Ocean coast and then return to the Atlantic Ocean coast where we spend a couple of nights at Swakopmund, Namibia’s (and arguably southern Africa’s) adventure playground.  Almost every adventure activity you can think of is available – sky diving, sandboarding, quad-biking to name a few.  It was too good an opportunity for most of the group to miss – Terry, Lesley, Jake, Sam and Cecilia jumped out of a plane at 10,000 feet, Georgia, Leigh, Mark, Teri, David, Mabel, Rogan and Kirsten took to the dunes on sandboards, Robin, Jake, David, Zan, Cecilia, Mabel, Pete, Rogan and Kirsten donned helmets and spent a couple of hours roaring around the dunes on quadbikes, and Lynley, Susie and Jeanne took the more sedate option of a dolphin and seal cruise accompanied by champagne and oysters!  For those not interested in any of the activities on offer, Swakopmund offered a great chance to catch up on email and phone calls home, enjoy the little luxuries like good restaurants and our first hotel for a couple of weeks, as well as being a lovely place to watch the sunset as you sip a glass of something cold by the ocean.