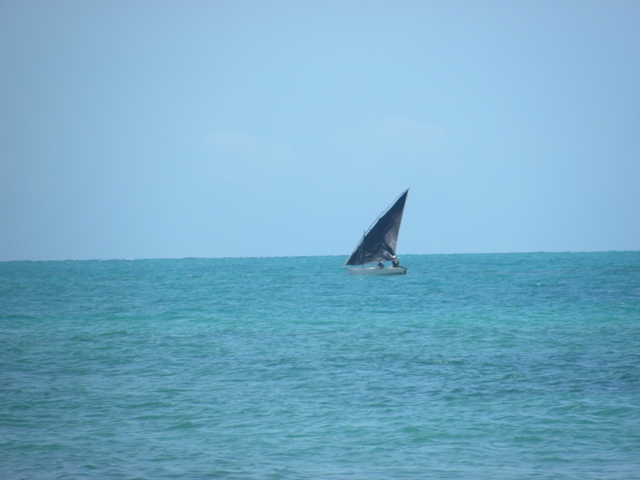 From Maputo we headed north to Tofo Beach.  Tofo is world-famous for its Whale Sharks and Manta Rays, and so diving and snorkelling were high on most peoples’ agendas, along with enjoying the stunning beach and the pool and bar at the campsite.

Whale Sharks are the world’s largest fish, they can measure in at over 20 metres long (a Southern Right Whale such as those we saw in South Africa tops out around 17 metres).  Getting the chance to go snorkelling with these massive gentle creatures is a rare privilege, and as you are seeing them in their natural habitat, it also involves a bit of luck to find them.  Most of the group headed out on an ocean safari on our first day in Tofo and were lucky enough to be able to swim with the whale sharks twice, as well as the added luck of seeing manta rays on the way back to the beach.  Those who went the second day had rougher seas and unfortunately didn’t get to see either…  that’s wildlife viewing for you, it is the luck on the day!  There was also spectacular diving to be done with great visibility and warm water, and a huge array of marine creatures including a curious Green Turtle, Moray Eels, Sting Rays, Nudibranchs, Leaf Fish and Trumpetfish amongst many others.

From Tofo we headed further north to Vilanculos where we spent another couple of nights on the coast.  Our drive took us across the Tropic of Capricorn – during our expedition we will cross both tropics as well as the equator!

Our campsite in Vilanculos is stunning, right on the beach with a gorgeous infinity pool where you can sit and watch the local fishermen bring in their catch and land their boats.  But the main reason for visiting this part of Mozambique is to have the chance to do a boat trip on a traditional dhow, a single-masted sailing boat.  The group headed off to enjoy a day on the boat and a nearby island – snorkelling, exploring the island and feasting on a wonderful lunch.  The photos can perhaps start to do it justice…

A highlight of any trip to Mozambique is the food.  With a combination of a strong Portuguese influence and plenty of variety of seafood, it is a great place to feast, and as our journey after Mozambique would take us inland for a month, we made sure to enjoy plenty of the local seafood, cooking up feasts of prawns, crab, red snapper and calamari – sometimes it is hard to remember that we are supposed to be roughing it!

Dragging ourselves away from the coast, we reluctantly left Mozambique behind, and after a camp near to the border it was time for country number 4, Zimbabwe.

The name Zimbabwe immediately brings to mind a troubled country and for many years it has been neglected by tourists, However, as things have now settled down, the former “bread basket” of Africa is once again starting to come back, and our time in Zimbabwe has been so highly rated by the group that we may be spending more time here in future trips!  Zimbabwe is a stunningly beautiful country, and is made even more so by the friendliest, smiliest and most helpful people we have come across so far.

Our first stop in Zimbabwe was Great Zimbabwe Monument.  This ancient complex of ruins dating from the 13th to 15th centuries has still baffles historians, although many theories abound as to why the complex was built and why it was abandoned by the 16th century.  It also gave the country its name, Zimbabwe meaning “stone house”.  Camping in the shadow of the ruins (fortunately the sun had decided to show its face after hiding behind storm clouds and torrential rain most of the day while we were driving), a couple of folks decided to get up at silly o’clock to see the sun rise, while the others enjoyed their pancake breakfast before heading off with the local guides.  The guides were excellent, their knowledge and ability to explain the ruins really brought these impressive stone structures to life.  Georgia even received a marriage proposal from the guide, all he asked for was 20 cows and a mobile phone in return!  Somehow we think she will stick with Leigh…

After stopping off at the craft market outside Great Zimbabwe, and another quick stop at Masvingo to do a foodshop (the previous shortages in food and fuel that Zimbabwe suffered are now happily a thing of the past, the shelves are full of local and imported goods), we headed toward a private wildlife reserve outside the town of Gweru.  For those in the UK, this reserve is where the TV show “Lion Country” is filmed which focuses on the reserve’s 4-stage rehabilitation and release program for lions.  As visitors to the reserve there are plenty of opportunities to see the lions in action, from near or far whether it be walking with lions, watching the raw (or is that roar?) power of the breeding lions being fed, or even going out on a night safari to watch the younger lions learning to hunt, there was plenty for everyone to do.  Many of the group also enjoyed elephant-back safaris through the park, and elephant training, and there was fishing, bird watching and plenty of time to chill in the restaurant and bar area overlooking the dam.  It was a great couple of days and a rare opportunity to get up close to some of the more formidable African animals!

Our next stop, the Matobo National Park, gave everyone another chance to get up close – this time with rhino.  Heading off in Land Rovers with a couple of fantastic and passionate guides, the group visited a local village in the morning and spent the afternoon walking in the bush in search of rhino.  Although the black rhino continued to elude us, the experience of standing close to the larger white rhino as they grazed is one that will not be soon forgotten!