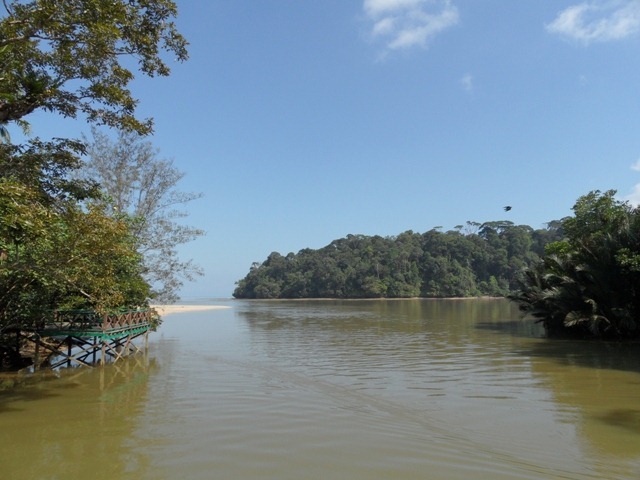 After leaving Kuching and our helpful taxi driver behind, we headed to the town of Bintulu by boat and bus.  Arriving after dark we checked into the hotel and went looking for somewhere to eat which, on this occasion chose us rather than us choosing it, as we walked through a restaurant only to have our way barred by the table they rapidly set up for us!  Fortunately the food was lovely, although the TV in the background was a little disturbing and reminded us how far we are from home!  Dogs popping balloons and kids in suits puckering up to kiss adult presenters – it was all a bit strange.

Bintulu is a fairly unremarkable town in its own right, although it does have an interesting night market and plenty of karaoke opportunities if that floats your boat, but our reason for being there was to visit Similajau National Park which is only a 40 minute drive away.  We set off early in the morning and after a breakfast of omelette (or perhaps more accurately described as fried egg), Sergeant Major Parry rounded up the troops and we marched off into the jungle.  I am pleased to report that everyone survived, with only a few red faces and proclamations that Ben was about to “die from sweat”, oh, and a few aching muscles the next day.  It was a lovely walk, hugging the coast for much of it, and culminating in a deserted beach.  Unfortunately no nice boatman arrived to take us back, so it was another hot and sweaty walk back, or in SM Parry’s case, a run.

From Bintulu we headed further east, our next destination was Niah National Park.  Famous for its cave which now houses millions of bats and swiftlets, it is also the place where the oldest human remains in South East Asia were found, over 40,000 years old.  We stayed in a lovely national park cabin with a living area and kitchenette, which was incentive enough to do a bit of cooking, and so we enjoyed a bbq and salad, it was great to have a bit of “truck food” again!

The cave entrance is magnificent, a huge cavern over 40 metres high and 300 metres wide, with poles precariously hanging from the ceiling where brave souls climb up to harvest the swiftlet nests for the culinary delight of birds nest soup (perhaps unsurprisingly a soup made from bird saliva has not rated as a must-do in terms of food for us!).  Barry and Pauline walked through the cave and reached the Painted Cave on the other side with its ancient rock paintings, and Lesley decided to go for a run up a hill that ended up being slightly more hectic than she had envisaged with ladders, mossy logs as bridges and shoe-consuming mud!  It was a great place to relax as well and indulge in our favourite pastime at the moment, trying to sift through the thousands of photos to put together the highlights for our families and friends!

After three national parks in a row, it was time to head for the cities.  We stopped for one night in Miri, time to stock up on snacks and catch up on internet and laundry.  We managed to sneak in a couple of glasses of wine and a couple of beers at a nearby restaurant, and even some Mexican food.

Leaving Malaysia behind for a couple of days we crossed the border into the tiny Islamic sultanate of Brunei and headed for the capital, Bandar Seri Begawan (fortunately referred to as BSB).  To describe BSB is difficult – there are signs of obvious wealth (historically derived from oil and gas) but it doesn’t have the brashness of Baku.  There are seemingly run-down stilted villages on the water, yet almost every one has a satellite dish.  While drinking alcohol in public is illegal, in other aspects it is a relaxed city where we were never made to feel unwelcome nor out of place.  The best way to view the city is by boat, and the whole group went out on a boat trip on the river which gave us great views of the impressive Omar Ali Saifuddin mosque, the stilted villages on one side of the river and the business district on the other.  It is a fascinating city to wander around, and a visit to the mosque is a must-do.  While being one of the strictest mosques that we visit, the staff were very friendly, even helping the girls get dressed into their robes and scarves.  Inside the mosque contains some fascinating elements, including a rather incongruous looking escalator!

After the chilled atmosphere of BSB we caught the bus to Kota Kinabalu.  8, yes 8, passport stamps later we arrived in late afternoon.  Historical events have led to Brunei being split into two parts, with the Sarawak province of Malaysia in the middle, therefore to travel from BSB to KK the most direct route you need to – exit Brunei, enter Sarawak, exit Sarawak, enter Brunei, exit Brunei, enter Sarawak, exit Sarawak, enter Sabah province – and each of those entries and exits requires a stamp!  It is a great way to fill up a passport, although for those of us with very limited space remaining in our passports it was a bit of a source of consternation!

Kota Kinabalu, again fortunately known by its initials only, is a funky town which has a definite party atmosphere on a Saturday night (and, as it turns out, also on a Sunday morning, right outside the hotel!).  We headed to the waterfront area for drinks overlooking the South China Sea and dinner.  The waterfront caters for a huge range of different cuisines, although many chose to stick to local food anyway!  Lesley and Simon got their long awaited curry, and Ben had, well, another burger!  KK is an interesting town to wander around, and the Sunday market which takes place directly outside the hotel gives us all plenty to look at and listen to!

From here we head to Sandakan, another fantastic orangutan sanctuary and the jungle again!  Time is just flying and it is hard to believe that we have less than a week to go…

PrevPreviousMonkeys, Orangutans and Cats
NextIn the jungle, the mighty jungleNext