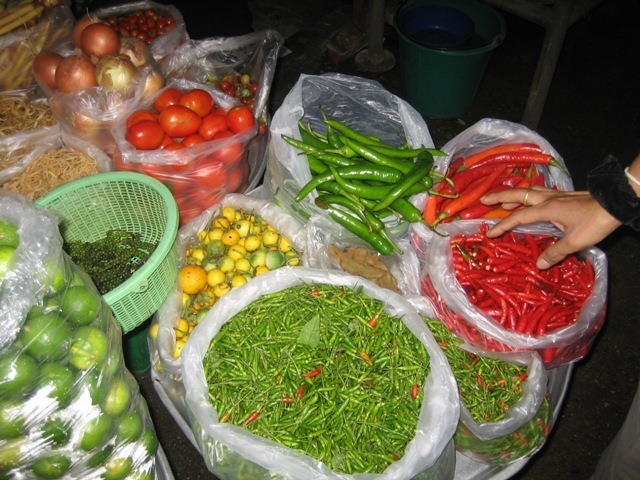 From the peace and tranquillity of Jungle Beach, we set off for the hectic city of Saigon.  Officially known as Ho Chi Minh City since 1975, but still referred to locally as Saigon, it is a crazy hectic city dominated by motorcycles.  Everything gets transported on motorbikes – from whole families, to furniture, upside-down chickens and pigs, to food stalls.  There are thousands of them on every road.  It makes crossing the road seem an impossible feat, but with you heart in your mouth you step off the curb and just keep walking.  Somehow, miraculously, you arrive at the other side of the road unharmed.  What appears chaotic to us is actually quite organised and the motorbikes happily swerve around you and continue on their way.

Saigon is home to one of the most interesting museums that we visit along the route, the War Remnants Museum.  It is a harrowing place to visit, with some horrific photographs and a somewhat one-sided view of events during the Vietnam War, but as many of the group have memories of seeing reports about the war on TV, it was a must-see.  For those  interested in seeing a bit more about the war, the day trip to the Cu Chi tunnels gives you the chance to see the terrain in which the ground war was fought, and to see the ways in which bamboo in particular was used to kill and maim.  The tunnels themselves are certainly not for the claustrophobic, the entrances have been widened to accommodate the western tourist, but as you go further and further they return to their original size, far too small for most to get through.

Saigon has a great night food market, with tanks of fresh seafood available to choose from, some things you would expect to see like fish and crabs, and some less appetising species like eels and frogs!  But all the food isn’t that adventurous, plenty of nice restaurants and western food if a burger is what you crave (and after travelling for nearly 5 months now, the western-food-cravings seem to come around quite often…) We had three nights in Saigon, and even those who were dreading being in a big city for a couple of days were won over by the crumbling charm of Saigon.

From Saigon it was time to head for country number 19 – Cambodia.  Another country with a very difficult past, Cambodia is host to one of the world’s most impressive sights – Angkor Wat – the largest religious building in the world and a highlight for many on the expedition.  But our first stop in Cambodia was the capital, Phnom Penh.  Prior to the Khmer Rouge the population of the city was over 2 million, swelled by refugees from the Vietnam War, however when the Khmer Rouge took over in 1975, they virtually emptied the city, killing many of the residents, particularly the educated.  We visit the Tuol Sleng Genocide Museum, which is housed in a former school that became Security Prison 21 (S-21), the country’s largest centre of detention and torture during the Khmer Rouge rule, with over 17,000 people being detained there before being taken to the Cheong Ek killing fields.  It is another harrowing but worthwhile visit, although after our time in Vietnam and now in Cambodia it is hard to come to terms with the atrocities that man can commit against fellow man.

It is perhaps surprising that despite the damage done to Phnom Penh under the Khmer Rouge, the impressive Royal Palace still remains, sitting elegantly near the riverfront.  The Royal Palace hosts the Silver Pagoda, so named for the silver tiles on the floor, each weighing in at 1kg, for a total of 5 tonnes of silver in the pagoda.  It is also home to the Emerald Buddha, and other incredible bejewelled Buddhist images.

For those into their food, no visit to Phnom Penh is complete without a meal at Friends, a restaurant set up to provide training and employment for former street kids, it is a great place to sample some unusual takes on local dishes, and maybe even a pineapple and chilli margarita. Another rather nice spot for a G&T or two is the Foreign Correspondent’s Club, with lovely views over the river, high ceilings, comfortable furniture and dark wood everywhere, it has a very colonial feel!  Simon was keen to celebrate his 50th there, and happy hour seemed as good a time as any to get together and raise a toast!

After two big cities on the trot, it was time to head for somewhere smaller, and so next stop was Battambang, a small town which has a really relaxed feel and was a great place to celebrate Simon’s birthday (again!) and also Taylor’s birthday, with a bit of cheese and biscuits.  Many people ventured out to see the surrounding sights, I am not sure Kay will ever be the same again after her Bamboo Train ride!

Battambang is the starting point for a boat trip up to Siem Reap and Angkor Wat.  It is a local style boat which is a great chance to see how life works along the river as we stopped off to do deliveries, pick up passengers from the middle of the river and powered through floating villages, complete with floating pig pens, shops and schools.  As we got closer to Siem Reap we left the river system and joined Tonle Sap Lake, the largest body of fresh water in south east Asia, and the source of livelihood for many of the local residents mainly through fishing, but increasingly through tourism.  Arriving at the dock for Siem Reap was an adventure all on its own, as the boat docked it was stormed by local tuk tuk drivers keen for you to hire them to take you into town.  Fortunately our transfer was pre-arranged, as their aggressive approach didn’t endear them to any of us, and we were able to walk relatively calmly past them to our transport.

Our hotel in Battambang had been one of the more basic that we had stayed in, with only a fan to combat the not inconsiderable heat, however our hotel in Siem Reap was at the other end of the scale with a lovely shaded swimming pool and attached restaurant with the best steaks we have seen since departure!  It would have been a lovely place just to chill for a couple of days, but with Angkor Wat waiting it was an early start for the whole group the next morning as they headed off in tuk tuks to see the incredible temple complexes, accompanied by a local guide to explain why the temples were built and what the carvings and symbols mean.  Wandering through the temples is an unforgettable experience, and a highlight for many.

We had two full days in Siem Reap, some people choosing to go out to Angkor Wat in the afternoon we arrived as well as each of the days we were there, while others were templed-out after the full day tour. The town itself is dominated by restaurants and bars, and a night market full of clothing and souvenirs of varying quality and taste!  Lesley headed off on a bike again, managing to lose Ben along the way who eventually returned to the hotel in the back of a tuk tuk with a broken chain.  Maggs had headed off to a local silk factory, while others chose to enjoy the pool and chill time.  Although we are travelling as a group, the experience that each person has along the way is up to them.  Certain times, such as Angkor Wat, the whole group will head off on an activity together, but most of the time each person will head off to do what interests them in each place that we visit.  The advantage of having the group is that there is almost always someone who wants to do the same thing as you if you fancy a bit of company or to share the cost!

Next stop – Bangkok!  The capital of Thailand is a huge, sprawling city, with a spiritual heart evidenced by the fabulous wats (temples) that seem to be on every corner, and a darker heart in the backpacker dominated Khao San Road area (for anyone who has read The Beach, this is where he stayed in Bangkok), and in the seedier red light areas of Patpong Road and surrounds.  Highrises dominate the skyline, there are countless luxury hotels particularly along the river, yet there are also local food stalls on every corner with plastic chairs to sit on the footpath and eat your cheap barbequed chicken or noodle soup.  As most of the group this year prefer countryside and natural beauty to cities, Bangkok was always going to be a tough sell!  Taking a boat up the river past the temples or up to the floating markets is a great way to see the city.  The Skytrain is another great way to get around, and it puts the Tube in London to shame – it is air-conditioned!  Most people ventured to the main temples and palaces, while others who have been to Bangkok before decided to visit the tranquil Jim Thompson’s House.  Some took the opportunity to visit the seemingly endless technology stores, get a massage or even a haircut…

We spend three full days in Bangkok to give everyone the chance to see and experience the city.  Anyone who found the city a bit hectic could relax in the knowledge that Beach Week was just around the corner!  But first we headed north west from Bangkok to the town of Kanchanaburi.  Most famous for being the location of the Bridge over the River Kwai, it is a great place to spend a couple of days exploring the local area on foot or bike, or doing a cooking course at our fabulous guesthouse.

Briefly back to Bangkok to catch our transport down to the islands, then it was time to chill.  Beach Week is everyone’s chance to find their own slice of paradise on the islands of Thailand.  Whether it is a Full Moon Party, or a secluded beach with with a single beach hut restaurant that floats your boat, there are limitless options.  Some of the group had family fly over from the UK or NZ to meet them for a week on the beach and a bit of home after 5 months on the road, some decided to do their scuba diving qualification course, and others headed for the beach with a view to doing no more than reading their book and working on their tan.

Here are some photos of the crew’s little slice of paradise!