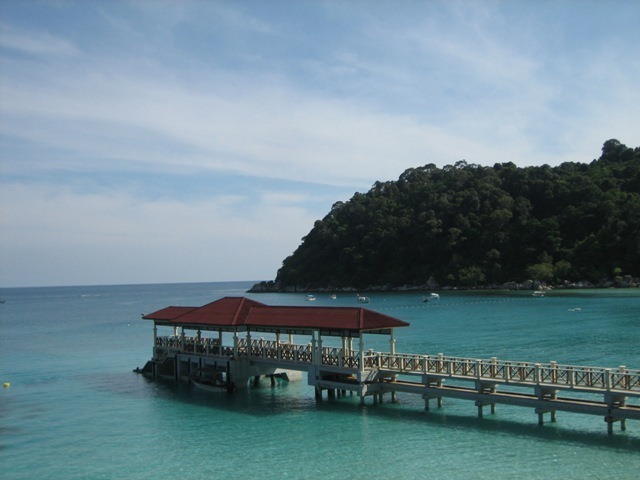 Khao Sok National Park was our next stop after the islands, and a great chance for everyone to catch up on what the others had been up to for the last week.  We stayed at a very nice tree-house resort on the river, a very tranquil spot.  Many took advantage of the river to have a refreshing swim (the sea surrounding the Thai islands is decidedly lukewarm!), and some went tubing down the river.  It was a very different experience from Vang Vieng, involving far less beer and far more wildlife.  Spurred on by our very own snake man, Pete, our guide happily found us several pythons, and even caught one for us to have a close look at.  It was a wonderfully relaxing morning, floating down amongst the stunning limestone cliffs and through the jungle.  Others headed off into the jungle for walks, and some decided to take advantage of their balconies overlooking the river and catch up on a bit of reading.

After two nights at Khao Sok we loaded up into minibuses and headed to our penultimate country, Malaysia.  Another nice easy border crossing and we headed to Pulau Penang, an island off the coast of Malaysia, accessed from the mainland by an impressively long bridge, and to the city of Georgetown.

Nowhere that we visit in Malaysia has a more colonial feel than Georgetown.  With the Barclays Bank sitting on the corner of Downing Street (and of course, with a name like Georgetown), the British influence is still present, but in the mix you also have some stunning Chinese temples and buildings, as well as an Indian and Malaysian feel.  It is a true melting pot of cultures, and a lovely town to spend a day or so wandering around.  Being a regular stop on the cruise ship circuit seems to have had quite a marked effect on the prices of food and drinks everywhere, but if you are willing to be a little more adventurous, the night market has a great selection of food, a very funky atmosphere and more reasonable prices.  While not all of us got into the groove quite as much as Barry and Pauline, who never need much of an excuse to demonstrate their not inconsiderable dancing skills, it was a fun place to spend the evening.

From Georgetown we headed across the Malaysian peninsula, to the stunning Perhentian Islands.  Unspoilt by the mass tourism of the Thai islands (there are no roads on the island, no cars, and no-one trying to get you to buy anything as you lie on the beach), we stay at a very simple “resort” right on the beach.  Monkeys and sugar gliders, monitor lizards and the occasional snake make their way past the cabins.  Behind the cabins there is nothing but jungle which is crossed by walking trails which many of the group took advantage of.  Just around the corner from our accommodation is a wonderful swimming beach with white sand and turquoise water.  For those feeling a bit more active, there is incredible snorkelling just off the beach, with huge Hawksbill turtles, mercifully small sharks, and an incredible array of brightly coloured reef fish (including plenty of Nemos!).  The islands are also a great place for diving, even if the current on the day did make Roberta’s ascent a little more rapid than planned!  It is a beach paradise, and rated by most as a trip highlight which, given everything we have seen in the last five and a half months, is quite an endorsement!

After all that beach paradise it was time to get back to the jungle, this time, Taman Negara, “oldest jungle in the world” (although arguably this is not the only jungle that claims this…)  After a convoluted day of travel, we arrived as the sun was setting and everyone headed off to bed for an early night.

After a good night’s rest in airconditioned comfort we set off en mass to the canopy walkway, even Neill and Simon joined us, both of whom prefer to be firmly on land.  A very sweaty walk through the jungle (signposted as a 1.2km walk, until halfway when it was signposted as being 1.5km further!) and we arrived at the start of the canopy walk.  It is the world’s longest hanging bridge canopy walkway, and everyone had a great time swaying through the tree tops, trying to keep their balance and many trying not to look down!

Several of the group decided to continue walking through the jungle.  Dennis, Barry and Pauline eventually returned by boat, soaking wet and accompanied by a Malaysian TV crew!  Just another random adventure!

We are now in Kuala Lumpur and being back in the big city is quite a shock after the last couple of weeks of beach and jungle, but I am sure the Petronas Towers, electronics stores and funky vibe will more than make up for it!

With fond farewells, promises to keep in touch, and a million shared memories it was time for the group to go their separate ways after an epic journey which started on the 18th of April this year.  6 months and 23 countries later, the 2010 expedition has drawn to a close.  Thanks to everyone for making it another great expedition!

But the journey isn’t over for everyone just yet.  Kirsten has headed to Borneo and Brunei with Roberta, Lesley, Ben, Simon, Barry and Pauline for three weeks exploring the fascinating Sarawak and Sabah provinces, and the tiny country of Brunei.  Keep watching this blog for amazing photos of the wildlife and cities along their way.

And what about the rest of the group?  Some are starting anew in Australia or NZ, some are returning residents after a long absence.  Some are saving for their next expedition (Africa next year), while others have decided to potter around South East Asia for a bit longer on their own.  Some are visiting friends and relatives in Australia before heading back to the UK, some haven’t quite decided yet what they want to do!  And special mention has to be made of Simon who will be heading to Cape Town straight after Borneo to join Pete and Kirsten on the Cape Town to Cairo expedition which leaves in early November!