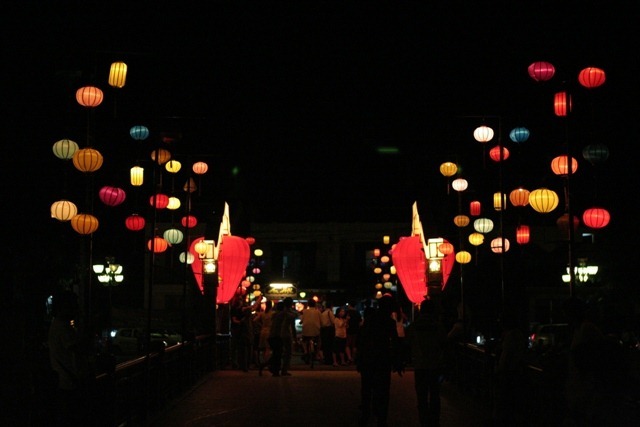 Phu Hin Bun National Park in Laos is one of the little gems that we have discovered over the years.  A short long boat ride from where our bus dropped us off, and we arrived at our “resort” which consists of very basic bamboo huts, great food and lovely views down the river and is a great place to spend a couple of days relaxing and enjoying the surroundings.

The main attraction in the area is the Kong Lor Cave, an amazing tunnel formed by the Hinboun River. The only way to explore the cave is to take a longtail boat through the cave. It is at first a little disconcerting speeding through in complete darkness, illuminated only by the torches held by the boat driver and his assistant, but after a while your eyes adjust and you can see more of the amazing caverns that you are travelling through. We stopped at some illuminated stalactites and stalagmites that were very impressive to wander around, and then we continued our journey through the cave, eventually emerging some 7.5km later. A quick bite to eat and a snake sighting, and then it was back into the boats for the journey home which seemed to go far more quickly as we travelled downstream.

After a brief stay in Savannakhet it was time to cross into country number 18 – Vietnam. Given our experiences of borders in the Stan countries and of course China, it is always a pleasure to go through these much more straight-forward borders, even if we did have to pay an additional $1 each to be processed through at lunchtime!

For most, the name Vietnam immediately brings to mind the Vietnam War, and there are plenty of historically important sites to visit such as My Lai and the Cu Chi tunnels, however it does appear that the national psyche is firmly routed in the present, and as foreign tourists we have all been made very welcome (even Ben, our American) and there is a genuine friendliness and enthusiasm from the local people to show you their country (and often to sell you things as well!).

Our first stop in Vietnam was Hue, located on the Perfume River it was the former centre of the Nguyen empire and has plenty of temples, pagodas and even a remarkable citadel and imperial city to show for it. Many of the group took the opportunity to join one of the many tours out to the temples and pagoda, while others chose to cycle 15km (quite a feat in this heat, and perhaps unsurprisingly led by Lesley) to the beach. Along with the joy of finding decent cheese and wine in Laos, our excitement at seeing a beach is perhaps a little bewildering, but as we had not seen the ocean since departure, it was really quite exciting! Sure, we have seen seas (the Black Sea, the Caspian Sea and where the Aral Sea used to be), lakes (Song Kol and Issyk Kol, as well as countless others) and rivers from the Rhine to the Mekong, but this is the first time we have seen walty water with waves on a sandy beach! Oh, the excitement! Ben spent his time reverting to his not so distant youth by building intricate sandcastles (usually then demolished by Simon), while others just enjoyed the warm water and the sand between their toes.

Hue was also the place where a couple of members of the group re-joined us. Mike and Alice had ventured off to Hanoi (as had Dennis who had also visited Sapa and would be joining us in Hoi An), and Simon had been back to Luang Prabang to get Ben’s diary (amongst other reasons). And of course Pete, who had been stuck in Lhasa since late July, had finally made it out of China and into Nepal after a swift bit of road building after yet another landslide, and arrived into Hue. Pete’s reappearance seemed as good a reason as any for a party, and the 2010 expedition debut of the Odyssey Blue cocktail. Suffice it to say that a good time was had by all, and there were a couple of sore heads the next day. Check out the passenger blogs for more dodgy photos!

The city of Hoi An sits in an enviable position on the Thu Bon River, with the beach only 5km down the road. It is a wonderful city to spend a couple of days or more, with so much to do and see it is hard to know where to start! As the hotel had a swimming pool, it made the choice even more difficult!

One of Hoi An’s most striking features is the number of tailors – it seems that almost every shop can produce you any outfit in any colour and any size, all in about 12 hours! Many of the group headed off to choose designs and materials for their new clothes or new shoes (after 4 months of travelling, our existing clothes are getting a little too familiar!).

Some managed to avoid the tailoring shops completely (more difficult than it might sound) choosing rather to hire bikes and cycle around the town and nearby villages, or down to the beach. James, Kay, Mike and Alice took off on a day trip to My Lai, which they found harrowing but worthwhile. Another group headed off to the My Son ruins, the most important remains of the ancient kingdom of Champa which was an interesting precursor to Angkor Wat which we will be visiting in Cambodia in the coming weeks. After the success of the last cooking course in Luang Prabang in Laos, Kylie, Neill, Katie, Taylor and Kay went to Cham Island and enjoyed a great day involving a boat trip, a magic table (apparently) and some lovely food which they prepared, although Neill was upset not to be allowed to wield a knife!

Walking around Hoi An at night is a lovely way to spend the evening. With the temperature and humidity a little more reasonable, the lanterns and decorations are stunning, and happily, for sale!

As you can imagine, all this activity is exhausting! How best to relax? How about a couple of days on the beach with nothing more to worry about than turning up to meals on time (and even then the staff will come and find you to make sure you don’t miss out). With a beautiful deserted beach, calm warm water and the sun shining, it wasn’t difficult to enjoy our time at Jungle Beach. A highlight from last year’s trip, it has not let us down, and everyone has thoroughly enjoyed themselves and won’t easily forget the amazing phosphorescence in the water at night and the bonfire on the beach. The most challenging part? Making sure that everyone gets on the bus tomorrow morning heading for Saigon (Ho Chi Minh City) and we don’t have any stowaways left in the camp!

PrevPreviousRelaxation and adventure activities? We must be in Laos!
NextTuk tuks and Temples, Museums and BeachesNext