Relaxation and adventure activities? We must be in Laos! 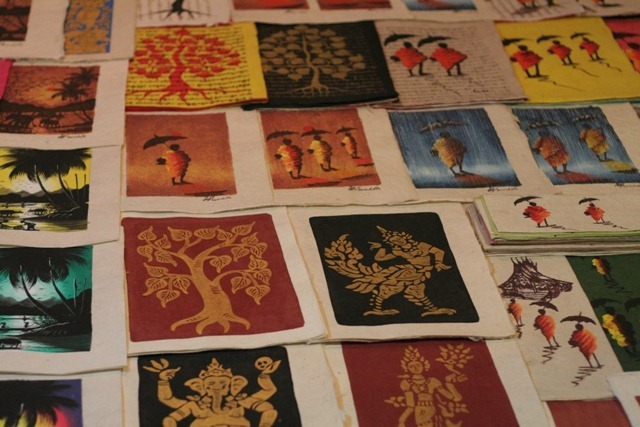 Laos has a reputation of being the most chilled country in South East Asia, and so far it has not disappointed!  One of our favourite quotes is “An adventure is not an adventure when it is happening. Adventure is physical and emotional discomfort, recollected in tranquillity.” (Tim Cahill), and we think that looking back, some of people’s highlights and most memorable moments will be from China – the incredible Mogao Caves, the spectacular scenery through Tibet, the Giant Pandas of Chengdu, the mighty Everest, maybe even the efforts to get the stuck trucks out on a high mountain pass – but there was a general sense of relief as we crossed the Laos border heading for Luang Nam Tha, our first destination.

Immediately upon crossing the border the scenery changed.  Villages stretched along the road with bamboo huts on stilts, and lush green hills stretched as far as the eye could see.  Gone was the overt police presence of China, and while the people we passed going about their daily business continued to be friendly as they had been in China, there was a feeling that we were more welcome in Laos, a country that is firmly convinced of the value of external tourism.

However if people thought they were going to just lounge around for three days catching up on facebook and blogs now that they were no longer blocked, they were wrong!  One of the best things about South East Asia is all of the adventure activities available.  Lesley (or Sergeant Major Parry as Simon now refers to her) led some of the troops off on a 30km bike ride on our first day.  The second day saw everyone head off on a kayak or day hike, with 7 of the group opting for both hiking and kayaking combined with an overnight stay in a local village.  A fantastic time was had by all, and many were eagerly awaiting their next chances to get active!

From Luang Nam Tha we headed a little more off the beaten track and visited the town of Nong Khiaw.  A sleepy little place, we had lovely bamboo bungalows overlooking the river, and most people took the chance to relax in the hammocks on their balconies, while others walked up to the caves or explored the town itself.

Our main reason for visiting Nong Khiaw is so that we can approach Luang Prabang by river, and so the morning of our departure saw us manhandling our bags (which seem to be getting heavier by the day) down a muddy slope to the awaiting boats.  As the boatmen looked on in awe at the amount of luggage that we have, we boarded and took our seats for the journey.  Some of the kayakers had complained that there was not enough whitewater when they had been out several days previous, however we saw plenty on our way to Luang Prabang, and the skill of the captains was easy to see as we skirted around whirlpools and avoided unseen obstacles.  The scenery is spectacular, jungle clad mountains climbing right out of the river with cliffs high above, but getting a glimpse into the routines of those who call the riverside their home is fascinating.  Fisherman (and fisher-boys) out in boats, women washing clothes or children at the river’s edge, kids playing around and throwing themselves into the water, pausing only to wave at us as we go past.

After a couple of hours on the river we reached the Pak Ou caves, an important religious site in Laos, these caves are dominated by hundreds of Buddha statues, often partially broken, and were a great chance to stretch our legs before the final stretch to Luang Prabang.

The further south we have come in Laos, the more Western tourists we have found.  It has come as quite a shock not the be the “celebrities” anymore, but rather one of many.  We try to make sure that as well as seeing the most popular sites (they are popular for a reason!) we also head off the beaten track as much as we can, something that we can often do more easily because we are travelling as a group.  But Luang Prabang is very firmly a tourist town, and it is easy to see why.  It has a lovely feel to it, plenty of activities in the nearby rivers and mountains, and a fantastic night market which lured many of us back night after night.

With many of the group having hiked and / or kayaked in Luang Nam Tha, Luang Prabang was the time to embark on different activities.  Several of the group went to a cooking course which included a walk around the fresh food market (the meat markets of Central Asia had hardened us to the sight of heads and hoofs, unlike some of our cooking course companions!), and then a short tuk tuk ride out to the cooking school.  Set in wonderful grounds, it was a great opportunity to learn a bit about Lao cooking, and have a lot of fun, and then of course a huge meal accompanied by the obligatory Beerlao (or cheeky glass of white).

The French influence in Laos meant that our culinary highlights did not end there as we celebrated Kaye’s birthday with wine and cheese (proper cheese!  No offense meant to Georgian salty cheese, however the excitement at being able to eat cheddar, brie, camembert and blue cheese was quite something!)

With shopping and cooking all ticked off, it was time to head for Vang Vieng.  This backpacker’s mecca in the middle of Laos is undoubtedly a strange place, and is not for everyone.  Gone is the feeling of spirituality and village life that is present through so much of Laos, replaced by backpackers lying on cushions in restaurants watching re-runs of Friends.  On first appearances it is a little difficult to understand why anyone would make more than a fleeting visit to this town, however when some of the group went tubing (floating down the river on an inner tube, stopping off at bars along the way, many of which have swings, ziplines or slides out into the water) it became clear why some people find themselves stuck in Vang Vieng for days, or even weeks.  One full day in the town was enough for us though, and it was only a short hop down to Vientiane, Laos’ super-relaxed capital city.

Vientiane is a wonderfully compact city, and our hotel is very centrally located, so most of the amenities are close at hand including the lovely public swimming pool which was a very welcome source of respite from the 35 degree heat and humidity and the bowling alley which was host to an hilarious night of bowling accompanied by the obligatory cheesy 80’s music.

Not all of the sights in Vientiane are close by however, and Sergeant Major Parry led the troops off again (the TOAST club – The Odyssey Adventure Sports Team) for a 50km round trip bike ride to the Buddha Park.  The Park is home to a wide variety of large concrete Buddhist statues, and is a great place to wander around for an hour or so.  Those who chose the tuk tuk option to get to the park potentially enjoyed it a bit more!  Vientiane’s French history is wonderfully demonstrated by its very own Arc de Triomph, although it is fairly clear that the signwriter is immune to its charms as he all but calls it a concrete monstrosity on the plaques at its base.  Nonetheless, the views from the top are lovely, and it is certainly an unexpected sight to see.

From Vientiane it is time to get off the beaten track again, and so we are heading to Phu Hin Bun National Park for some jungle and cave time before we make the crossing into Vietnam and hopefully join up with Pete again!