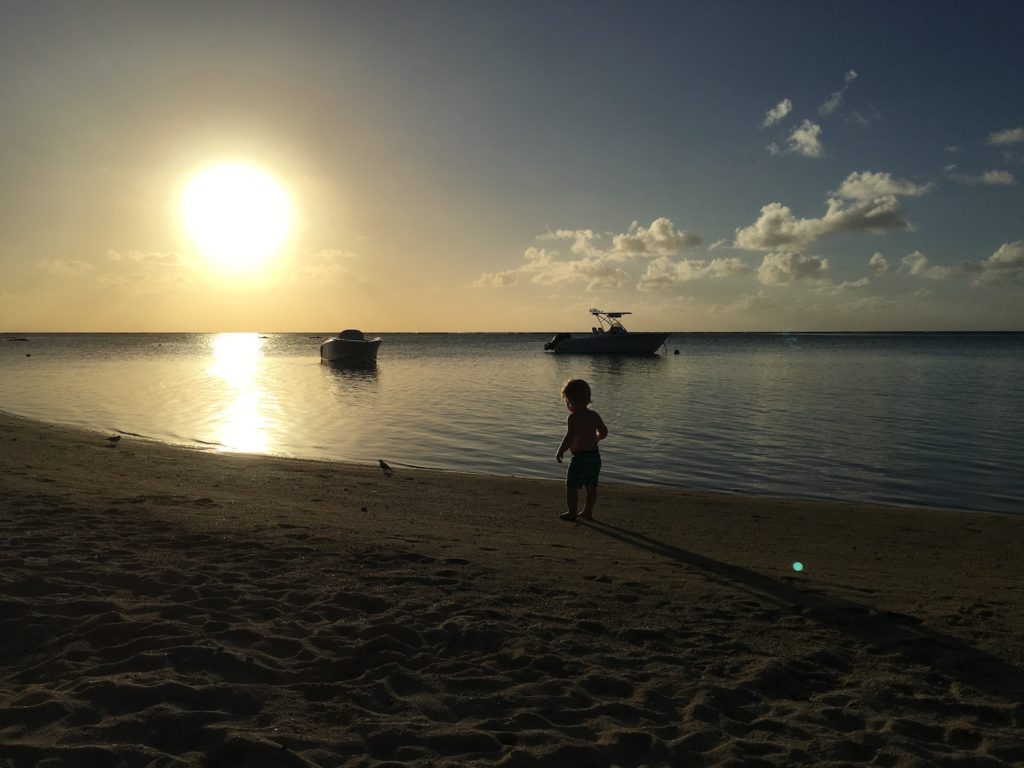 Winter in the Western Cape of South Africa can be a pretty wet and windy affair and so just before Miss C was born, we decided to escape to the more tropical climate of Mauritius for a couple of weeks of winter sunshine.

Mauritius is a small island in the Indian Ocean, around 5 hours flight from Cape Town or 3 hours from Joburg, and there are also flight connections from around the world.  With its relatively temperate climate and long meandering coastline, Mauritius is the island-break destination of choice for South Africans.  There are plenty of resort options available, many offering all-inclusive packages, but that’s not really our style so we decided instead to stay in 3 different self-catering apartments during our time on Mauritius, and to explore as much as possible of the island in our hired car.

Mauritius is renowned for its beautiful beaches and coastline and we found many beautiful spots around the island. Whether you are looking for wind and waves for a spot of kitesurfing, or a calm wave-free cove that’s perfect for toddlers, there were plenty of options.

We visited the renowned Le Morne beach but the wind had come up – great if you want to go kitesurfing but not so much if you want to relax on the beach with the family.  We had much more success at the beach at Flic en Flac and accompanied our beach time with some delicious deep fried goodness snacks from one of the food trucks that sit amongst the casuarina trees behind the beach.

Our accommodation on the east coast near Trou d’Eau Douce was right on the beach, and we enjoyed walking along the beach although again the wind was a bit of a factor here. The way the trees grow is a pretty good indication that wind isn’t a stranger here!

Our favourite beach was at Pereybere, walking distance from our accommodation there. It was the perfect sunset beach, calm enough for even the most water-averse toddler and a lovely place to relax in the afternoon.

Mauritius was uninhabited when the Dutch first arrived in 1598. Eventually the Dutch introduced sugar cane and deer to the island, but then abandoned their settlement in 1638. The French claimed Mauritius for themselves in 1715, re-named the island Ile de France. In 1810 the island was peacefully ceded to the British, which was the point at which it became known as Mauritius. Slaves were brought in from Africa to work in the sugar industry, and from 1834, Mauritius was the first country in the world to adopt the system of indentured labour from India to provide additional labour for the sugar industry.

There is no doubting that the sugar industry has had a massive impact on the history of Mauritius. We visited the fascinating L’Aventure du Sucre museum which we thoroughly recommend. They also produce an excellent guide in several different languages which was helpful for the trivia buff in me as the museum exceeded our toddler’s attention span and there were parts we didn’t get to read and explore in as much detail as we would have liked.

We also toured the Maison Eureka museum, a beautiful old plantation home built in 1830. The gardens surrounding the house are beautiful and we took a short but slippery walk down to the river to the waterfalls.

Where there is sugar cane… there is rum. We headed to La Rhumerie de Chamarel and took a guided tour which was comprehensive and interesting and then we treated ourselves to a meal at the restaurant.

A 20-minute drive from Black River is the Black River Gorges National Park which we thoroughly enjoyed exploring.  With beautiful views over the island, a nice walking trail to a waterfall which was do-able with a toddler.

A fun afternoon trip was our visit to Casela Nature & Leisure Park. Lots of animals for our toddler to enjoy, and a little play park there as well.

We had a very enjoyable time at the Sir Seewoosagur Ramgoolam Botanic Garden where we were able to have a guided tour and explore the gardens. A great destination for kids, plenty of space to run around.

Pete headed off for a day trip to go deep sea fishing. Not much was caught, but he had a great time out on the boat and enjoyed the experience.

A more sedate and family friendly boat trip – we took a glass bottom boat tour at Blue Bay Marine Park. The coral was very bleached and quite disappointing, but Mr S loved going on the boat and seeing the fish swimming underneath us. A good activity for a cooler and windy day where the beach wasn’t so attractive.

We stayed at three different self-catering apartments during our time in Mauritius – Grand Riviére Noire (Black River), Pereybere and Trou d’eau Douce. All of the apartments had either private pools or access to a pool, but we had somewhat overestimated the temperatures and found the weather (and water) was a bit too cold to enjoyably swim in June, so the pools weren’t really necessary.

With a toddler in tow we found that it was easiest to eat at home so we cooked pretty much every night. During the day we found some deep fried goodness to keep hunger at bay which we very much enjoy. But generally we found food in Mauritius to be quite expensive – since a lot of food needs to be imported that’s no surprise, but it did put us off eating out. Even the food in the supermarkets seemed quite pricey compared with South African prices. Markets were more reasonably priced.

Our Mauritius trip was relaxing and easy and we were pleased to be able to see so much of the island during our time there. That said, if we were to go again we would choose a slightly warmer time of year so as to be able to enjoy more of the beautiful beaches. Strangely we would also choose a slightly less off-season time of year, not because we love crowds of tourists, but because more of the facilities and activities would be in full swing.

In terms of a child-friendly destination we would rate it very highly – there are lots of beaches and outside spaces to enjoy with kids and you can find plenty of beaches with no waves for younger kids.

We are Pete & Kirsten and we are World Overlanders. We have traveled overland across Asia, Africa and South America and are currently on a 6+ month road trip around North America with our two kids. Read more

How to apply for your US Tourist (B2) visas in Cape Town, South Africa. Including the application form, interview and more.

Should we get a Class A motorhome or a Class C? Do we choose fuel economy vs space? Is the Ford V10 the answer? What

Before we had kids we had visited St Lucia a couple of times, at one time we camped in the Sugarloaf campsite for 6 weeks,