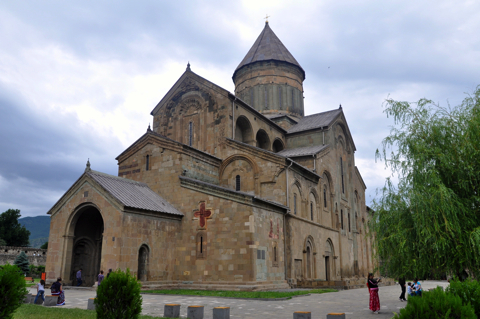 Turkey showed us all a great time and as we wound our way down from our hotel up near Sumela monastery we headed back to the Black Sea coast and wandered along its edge heading for the border and our next country Georgia. No matter how you try it is very difficult to explain that a simple border crossing can cause the world you have just got used to in Turkey to change so totally.  From an Islamic state to a Christian country, from an industrial powerhouse in Turkey to a sleepy former USSR state, from three lane highways to bumpy little roads, almost everything changed within about 300 metres, but wonderful Georgia was ready to show us what it had to offer.

Zaza our local guide met us at the border and we rolled just down the road and setup for lunch outside a old Roman fort which everybody headed off to explore while the crew setup lunch. After a good wander and a relaxed lunch we headed a short way down the road to Batumi, a Black Sea resort town which has and is being renovated to its former glory. The local builders have done a fantastic job of making this old town retain its old building styles, though the mix of styles is quite bizarre as you wander the streets. Our hotel is right in the middle of the centre which typically for any Georgian town is all a bit crazy with hooting cars, crazy taxi drivers and a fair bit of noise. The local police in their new cars with built-in loud speaker and microphone made an interesting addition, though definitely did not add to the vibe of the town.

Once settled in most the group headed out to wander the streets and the beach front promenade with has some great sculptures and monuments. Many also ended up in the street side cafes sipping on a coffee or a cold beer. For the evening we had set up a Georgian feast at a local restaurant so as to introduce everybody to Georgian-style food which is very different for most people.  Roasted eggplant (aubergine) covered in walnut sauce, chicken roasted in a garlic sauce,  Kachupuri (georgian cheese bread which comes in three varieties), selected pickles including the flowers of one of the local trees, meat, meat and meat done all sorts of ways and many other strange dishes appeared on the table in an unending parade. Every time we do one of these feasts we try and get the quantities right but try as we may the Georgian approach is that there should always be more than enough food! This all mixed in with some local wine which is also quite different from what most people are used to (but could not have been too bad as we managed to polish off 13 litres between 21 of us!).  The local “lemonades” also went down a treat; some are made from lemon but others made with Taragon and Pear became firm favourites.

From Batumi we wondered through the countryside towards our next stop Kutuasi which is Georgia’s second city with a great old centre and proper market, but before arriving we decided to head for the Prometheus caves a newly opened attraction in Georgia. It was explained that is was lit with coloured lights and the walk of about 1.4km under ground would be accompanied by a guide and classical music. All agreed that this could be really amazing or really tacky, but off we went. The entrance area was impressive and the music was great and lighting subtle and as we progressed further into the cave it was truly impressive with fantastic stalactites and -mites.

Then on to Kutuasi where we stayed in a fantastic “homestay” now closer to a hotel than a homestay but this did mean new mattresses, working plumbing and all rooms where en-suite, not to mention an amazing view over the town. The following morning after a traditional Georgian breakfast we headed down into town and spent until lunch time exploring the markets and old part of town.

Before heading to the mountains, we stopped off at the town of Gori.  The Stalin museum is to be found here, providing an unusual take on the history of one of the worlds most infamous dictators.  The nearby Uplistsicke Caves are well worth a visit, evidence of one of the country’s oldest settlements.

The Caucasus range forms a ridge down Georgia’s northern border with Russia and as we headed up from the plains we slowly climbed to 2,460m to be surrounded by stunning peaks and valleys and a bit of remaining snow. Our destination was the small mountain hamlet of Kazbegi which is only a couple of kilometres from the Russian border and is where we set up camp. The big attraction is to either trek or jeep ride to the top of one of the nearby hills and visit the stunning mountain top church. Most the group opted for the jeep transfer and an adventurous few opted to do the walk, but the views from the top made it all worth while though the weather made for a fairly quick visit. Big mountains develop some interesting weather and we definitely has our share of bad weather while in Kazbegi, but all part of the adventure and the group have settled into camping well now and with new fly sheets on the tents a good nights sleep was had as everybody snuggled up in their sleeping bags.

From Kazbegi we headed down the mountains stopping enroute to visit the Ananuri monastery and the old Georgian capital of Mtskheta before heading for our hotel in the capital Tbilisi. Tbilisi is a fantastic town, a bit like a undeveloped Prague and a great city to get yourself lost amongst its many small cobbled streets, amazing parks, squares and the impressive Ratavelli Avenue with its stunning Opera house and goverment building.

Fairly new on the Odyssey route was our next destination the small country of Armenia. After crossing the border we bumped our way down a amazing gorge as we headed towards Yereven. As we exited the gorge we started to climb before arriving at the top of the pass with amazing views of Mount Ararkat not mountain Ararat. This peak topped out at 4,200m and was stunningly surrounded by grassy plains, with the fantastic surroundings and views we decided to head off and find a bush camp and finally settled for camp on the top of the hill surrounded by pine trees but still with some amazing views. Dinner that night was traditional dumplings, but served with a mushroom sauce and a dill cream, with a good selection of local vegetables.

The following morning we headed off for the capital of Armenia, Yerevan, with a stop off at the Armenian alphabet memorial which was fantastic before arriving in Yerevan just before lunch. Yerevan is a much newer city thanks to a revamp in the 50’s and is a crazy mix of old and new where you have ancient Ladas competing for road space with huge BMWs and Mercedes Benzs.  It is though a town which everybody soon took a shine to, everything from great restaurants, puppet shows, traditional dance groups and so the list could carry on.

We then headed back towards Georgia stopping off on the shores of Lake Sevan at a monastery for a couple of photos before heading back through the border and into Georgia  for a bushcamp up in the hills. Our next destination was the wine making region of Georgia where we have wandered around for a couple of days sampling Georgia’s finest wines and  buying a total of 65 litres of wine which will hopefully last us till Beijing and 12 litres of Chacha the local Georgian fire water distilled from grapes and a lot like a good Grappa! Many merry days ahead of us.  As always Georgia has been a unique experience for everybody, but now we are looking forward to our next adventures in Azerbaijan and beyond.