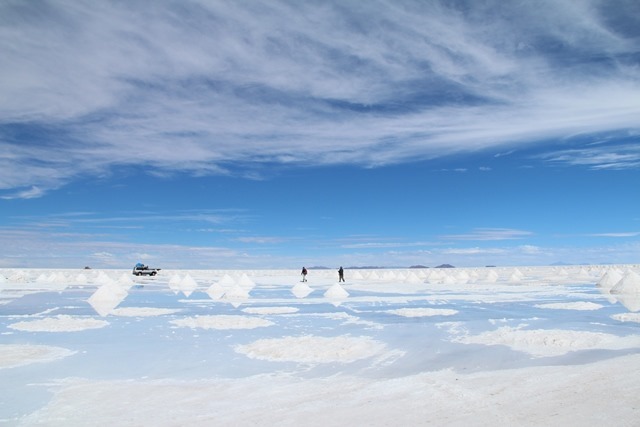 I am not the first to have described Bolivia as breathtaking, and I won’t be the last, but it is a word that sums up so much about Bolivia.  We have become accustomed to travelling at high altitude, but in Bolivia the bar was lifted as we spent considerable time above 3,500m – everyone coped really well with the altitude, but it did make many of us wonder just how unfit we had become, running up a flight of stairs in Potosi for example, can render you unable to speak for several minutes as you gasp for breath!  Bolivia is also breathtaking because of the sights and experiences available, and we were keen to do as much as possible while we were here.

Our first stop in Bolivia was just down the road from Puno in Peru, the small town of Copacabana (not to be confused with the fancy beach in Rio, they share a name but little else!).  We had enjoyed a nice quick border crossing, Terry’s quest to Odyssey-sticker-ise the world continued and the immigration officer proudly stuck his sticker on the desk in front of him, not sure what his boss will think of that though!

Just off the coast of Copacabana in Lake Titicaca is Isla del Sol, the island of the sun.  Traditionally it was believed that this island was the birthplace of the sun, although on our first morning the sun was not in evidence as heavy cloud and light drizzle fell.  But undeterred, Geoff, Jeanne and Francois headed off to explore the island for the day.  And judging by the sunburn on Geoff’s nose, the sun definitely made an appearance later in the day!

Our next destination was the city of La Paz via a rather heart-stopping barge journey for the truck across the Tiquina Straits.  Although not the official capital of Bolivia, this high altitude city is Bolivia’s heart.  Our arrival into the city coincided with a protest which poor Ithaca got stuck in for a couple of hours while we headed to the hotel in taxis.

A guided tour of a city is often the best way to get a feeling for the city in a short space of time.  Our tour of La Paz started with a visit to the Valley of the Moon, a spectacular and unusual landscape just outside the city itself.

Our final stop was the witches market, where llama foetuses adorn the front of every shop.  All manner of potions, tokens, candles etc promising love, happiness, health or wealth.  Sadly no purchases were made so we can’t verify whether the items delivered what they promised!  Maybe next time…

On our second day in La Paz nine of the group headed off on a full day of mountain biking.  But this isn’t just any mountain biking, this is the “World’s Most Dangerous Road”.  An early start, a minibus ride to the starting point which included each of us having to tell an embarrassing story, getting kitted up with helmets, gloves etc, and then getting our bikes and the all-important safety briefings, and then we were ready to head off.  It started sedately enough with tar road and gentle curves, although the ride was made a little more challenging by the sleet that was stinging our faces!  But then the tar stopped, and it was time to test our abilities to ride on the rough dirt roads that wind down the mountain.  Which happily we all managed to do without incident!  Although the blisters on Lisa’s hands are testament to how hard she was holding on!

Finishing up our ride at below 2,000m, an altitude we haven’t been at for quite a while, we had the opportunity to go zip lining – even Robin was tempted to try to overcome his fear of heights, although he has now declared that he will never do it again!  Many of the group chose to do one of the wires in a superman / wonder woman style, the harnesses for which looked as if they could double for sumo suits!

The adrenalin of the day, mixed with a beer or rum & coke or two, and we partied our way back into La Paz, singing loudly and badly to favourite old songs, and even doing some very dodgy dancing on the conveniently located pole in the centre of the minibus!  Fortunately (or unfortunately) there were plenty of cameras around to capture the mayhem…

Leaving La Paz behind, we set off early on what was to be a long drive day to Potosi.  Everything was going to plan until we reached the city of Oruru where protesters had closed the Panamericana highway, which unfortunately was the road we were driving on!  We tried valiantly to drive around the town, but alas, their road blocks were complete and we were stuck.  For how long?  Estimates varied depending on who you spoke to, but it was certain to be a good couple of hours!  Lunch was set up under in the shade of an overpass, giving our fellow stuck road users something to stare at for an hour or so, and then we resumed our sitting and waiting, after all there is no point getting upset and impatient, it won’t achieve anything!  The chorus of snoring on board at one stage was quite impressive!  Eventually at around 5pm (6 hours after we had arrived in the city!) the road block cleared, the police coming along to encourage the protesters to move on swiftly, and we were back on the road again.  As it was getting dark we just drove on for an hour and then found a bushcamp – it definitely wasn’t one of our best, but as we had discovered a diesel leak, it was time to stop anyway!  After a hearty meal most of us retreated to the warmth of the truck for a couple of games, and then off to bed with clear skies above us again signalling a night of beautiful stars, but heavy frost.
The delay in Oruru meant that all our plans had to be pushed back a day, and we would have to combine two short drive days into one long drive day, but hiccups like this are all part of any long distance journey.  Fortunately as we are all travelling for a long time, it gives us the luxury of being a bit more flexible and relaxed about these things!

Although we arrived into Potosi a day late, we had jiggled the itinerary to mean we still had two nights here, giving everyone the chance to explore the town which is famous for being the centre of Bolivia’s silver industry.  Founded in 1545, at one stage it was one of the wealthiest cities in the world, and one of the largest cities in the Americas.  These days it is remains a mining town, although tourism is also a big contributor to the town’s economy.  Touring the mines is a popular option, and many of our group took the opportunity to don a boiler suit and helmet and head deep underground to see the miners at work, taking gifts which included dynamite and 96% alcohol (not known to be a great combination!).  Funnily enough, not too many of those who visited the mine are considering a change of career to become a miner…

The mint in the town is well worth a visit with explanations of how coins have been minted over the years, the process changing little except for the way the machines are powered – from horses to electricity.

Potosi was also where we celebrated Kirsten’s birthday with a surprise cake and a group dinner out at a great restaurant in town.

A short drive from Potosi took us to the dusty outpost of Uyuni, the gateway to the world’s largest salt flats.  Our tour to the salt flats started with a visit to the train cemetery just outside the town itself, home to old rusting steam locomotives which were abandoned after the mining industry collapsed in the area in the 1940s.  Great for photo opportunities!

We then headed out to the salt flats themselves, stopping briefly first for an explanation of how the salt is harvested, refined and packaged (all by hand, very simple process), and a small incident involving getting locked into the toilet by someone who thought we hadn’t paid!

The scale of the salt flats is hard to convey in words – at over 10,500 square kilometres, roughly 100km x 100km, they are huge!  The glistening whiteness of the salt combined with the flat landscape takes away all perspective – makes for some fantastic photos though!  A great day out.

Our final stop in Bolivia as we headed south towards the Argentine border for one more time, was the town of Tupiza.  We arrived late into the town, navigation proving to be somewhat challenging when 5-way intersections were reached with no signage, but eventually we were parked up and headed off to find some dinner.  After dinner the sensible ones headed to bed while a couple managed to accidentally imbibe one or two too many drinks in a dodgy nightclub and suffered mightily the next day!

This is cowboy country, with fantastic rock formations, multi-coloured hills, and striking cactus providing a great backdrop to treks or jeep trips for those keen to head out and explore the surrounding area.  Others took the opportunity to mooch around town or catch up on a bit of skype time.

And then, just like that, it was time to head back to Argentina, the country where this epic journey first began!  Seems hard to believe 6 months has passed – that is until you start to look back through the amazing sights and experiences we have all enjoyed, then it seems like 6 months is hardly enough time to have done it all!