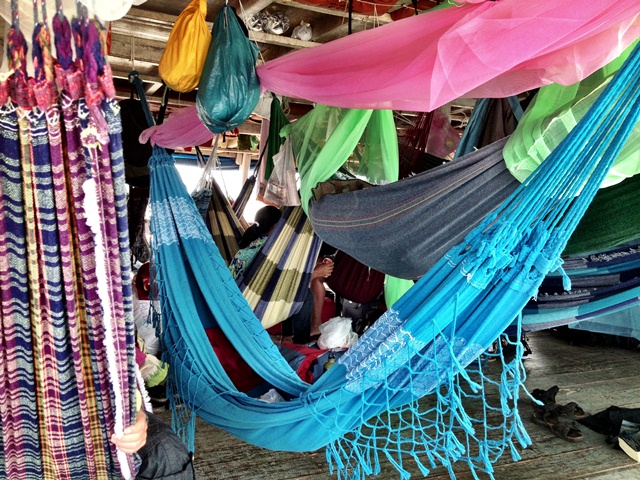 The small town of Porto Velho was our jumping off point for the ferry journey that everyone in the group had been looking forward to or dreading in equal measure.

Arriving into town, Pete and Kirsten headed off to organise ferry tickets and negotiate a place on a barge for the truck to head down the river as well.  It was all very easy to organise (which is always a worry!) both the ferry and the barge were to leave the next day and would arrive into Manaus about 24 hours apart.  Happy days!

The next morning, we all headed off to buy the essential ingredient for the ferry journey – a hammock.  There were options aplenty, ranging from plastic camouflage hammocks (not in this heat and humidity thank you!) to lovely cotton hammocks in every colour under the sun.  It was while we were finishing our hammock shopping that Pete returned with the news that the ferry would be delayed by 24 hours.  Why?  Well, to be honest, we still aren’t sure as every answer was different.  And so it was that our first night on the ferry was spent tied up to the dock in Porto Velho with a dinner of takeaway burgers eaten up on the top deck under the stars.

One of the key skills required to be a successful overlander is to master the “hurry up and wait”, and that’s exactly what we did as we were advised of different departure times throughout the day – 9am, 11am, 2pm, 5pm, 7pm.  At the same time, Pete was experiencing exactly the same thing with the barge which had also been delayed, although frustration at the delay was tempered by relief to have the truck on board and intact after a rather exciting loading process involving two wooden ramps that proved slightly inadequate when confronted with a 17-tonne 3 axle beast of an overland truck!

Finally at 8pm, the final cargo on our passenger ferry had been loaded (we will never look at onions the same way again) the ropes were thrown off and we we departed.

Reading, watching the jungle slide by, glimpsing riverside life, eating, playing backgammon, drinking tea, taking photos, chatting, working out where to hang hammocks when we return home, sheltering from the storms that hit us each day, staying out of the sun, listening to music, watching the kids on the boat entertain themselves for hours, snoozing, rehanging hammocks – you can get a picture of how busy we all were!  It was a great way to spend a couple of days and recharge the batteries.

After being told we would arrive in the late afternoon, it was a bit of a shock to be awoken at 4am when we actually did arrive into Manaus…  plans for another day of lazing in a hammock were thwarted, and instead we waited until it was light and then jumped into taxis and headed to the hostel.

Manaus is a base for trips into the Amazon jungle, so after a celebratory dinner for Jeanne’s birthday, early the next morning most of the group headed off in minivans and then boats to an eco lodge in a lovely setting on the edge of the Rio Urubu, a “black water” river with mercifully few mosquitos!  The lodge itself was a great place to relax while sitting on the deck overlooking the river and doing a spot of bird watching.  But sitting around wasn’t why we were here, and the lodge had arranged a full program of boat trips and walks to give us the opportunity to experience the surrounding jungle and flooded forest.  The Amazon is a haven for wildlife and while the dense jungle makes wildlife spotting a challenge, during our stay we were able to see caiman, toucans, kingfishers, snakes and even caught a glimpse of some very fast moving capuchin monkeys.  On our boat trips we were also treated to several sightings of the shy and unusual-looking pink dolphins that inhabit the river.  Flush with success from our piranha fishing in the Pantanal wetlands in Brazil, we attempted to catch our dinner again, with mixed results (although Colin’s perseverance paid off in the end when he landed a sardine as well).

So why is it called a rainforest?  Well, we certainly discovered why during a jungle walk when the heavens opened above us!  Rainjackets offered scant protection against the deluge, many of us agreeing it is probably the wettest we have ever been without going swimming!

A highlight of our time in the jungle (and for many, another overall trip highlight) was a night spent in the jungle sleeping in hammocks and learning how to make a fire, whittling a spoon to eat the rice and chicken that was cooked over the fire, and enjoying the sounds of the jungle at night.

Returning to Manaus we caught up with those who had stayed behind and explored Manaus, and were reunited with Pete and Ithaca who had finally made it after their barge had broken down.  Those of you who know Pete won’t be surprised to hear that he climbed in and got covered in oil and grease while he was fixing the problem… in fact, I have my suspicions that he sabotaged the barge just to give himself the opportunity to get another set of clothes dirty!

Manaus was to be our last major stop in Brazil, a country that we have explored for over 7 weeks.  It is always exciting to be heading to a new destination, but Brazil has offered us a fantastic range of experiences and will be fondly remembered by us all, and many have plans to come back again in the future.  That’s the problem with travel, isn’t it?  The more you see and experience, the more you want to see and experience.

1 thought on “A ferry nice journey”

PrevPreviousThe times, they are a’changing
NextAround Brazil in 51 daysNext