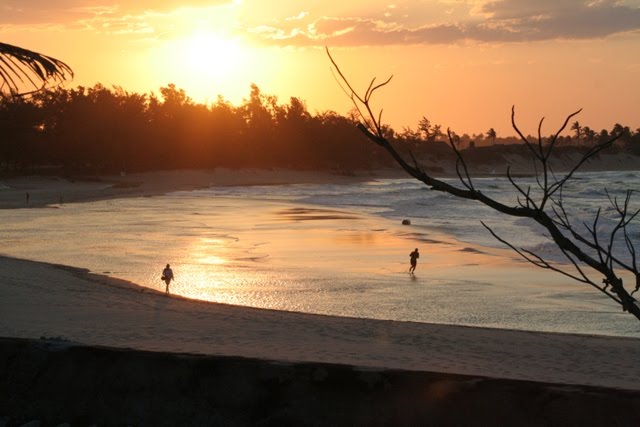 From Malawi we crossed into Mozambique. Apart from our small altercation on the border of Tanzania, the borders we crossed on the trip were a pleasure! Friendly border guards, very little paperwork and we were generally able to get from country to country in about an hour! So much easier and less stressful than the borders in Central Asia which the London to Australia trip pass through!

In my younger years I spent a lot of time diving in Mozambique and I have very fond memories of the friendly locals and spectacular beaches and inland scenery and it is one of the places I was most looking forward to returning to.

The section of Mozambique from the Malawi border at Zobue to the coast is underdeveloped in terms of tourism, and so we decided to bush camp for a couple of nights. The truck is self-contained for a couple of days as we carry several hundred litres of water as well as all the cooking equipment (and a fridge to keep food and drinks cold), and this is one of the greatest things about overlanding as it allows us to head off and set up camp wherever we want (after asking permission from the landowner of course!). Our first bushcamp was right at the edge of a village which meant that we had an audience while we set up camp and cooked our meal. I am pretty sure they had never seen the likes of us before! The next night our bushcamp was a nice flat section of land over a hill which allowed me to really try out the off-road capabilities of the still unnamed new truck. And she was awesome!

Our first couple of days in Mozambique as we headed towards the coast involved quite long drives, although the distances were not that great, the roads were often in quite poor condition. It seemed to vary from province to province (perhaps in an inverse relationship to whether the head man in the province is driving a big car and living in a big house?) Huge potholes were everywhere (really proper potholes, not like the little ones on UK or South African roads) although sometimes attempts to fix them only seemed to make them worse, and the road ended up looking like a patchwork quilt! Fortunately the size of the tyres on the truck means that we have a much more comfortable ride than people in 4x4s or cars, but a couple of hours of swerving all over the road and trying to find the best line through the potholes is pretty tiring stuff! You will be happy to know that this road is not on the itinerary for our Trans-Africa trips!

The coast in Mozambique is stunning, picture postcard stuff. Crystal clear azure water, white sand, palm trees, the works! We chose to stay at a campsite about 7km outside of Vilanculos. That is, 7km of a road that consists entirely of deep sand! Again the truck performed admirably, and although we did have to use the sandmats once when we got a little bit stuck in deep sand, there is no doubting that this truck is perfect for a Trans-Africa trips where we will be doing a lot of driving through sandy deserts in the northern sections through Ethiopia, Sudan and Egypt.

Only a bit stuck, but nothing that sandmats couldn’t fix. You can see the door into the truck – it is basically a ladder, and along with replacing the canvas sides with proper hard sides and big windows, this will be one of the other major changes to the truck as we will put a proper staircase in to make it easier to get in and out of the truck.

The campsite was lovely, with a fabulous infinity pool (very posh!) and a nice restaurant, so we parked off for a couple of days which gave everyone the chance to do some laundry (or have it done for them!), enjoy the hot showers and chill. Oh, and enjoy the amazing seafood that is on offer, particularly the crabs! From the pool we could watch the fishing boats come in and unload their catch for the waiting crowd on the beach. Overfishing has been a problem in Mozambique as in so many places, and certainly there were fewer fish on offer than I remembered from previous visits, but there seems to be no lack of prawns and particularly crabs!

On a day trip across to Bazaruto Island for unspoilt beaches and great snorkelling.

After a couple of days of relaxing and chilling by the pool we were keen to get on the road again to continue exploring! We said goodbye to two of our group who were flying back to Cape Town and their offices, and headed off along the coast. We crossed the Tropic of Capricorn as we headed south towards our next stop, Tofo Beach. Tofo is another lovely spot along the coast and we found a nice lodge to stay in, right on the beach. We were hoping to do some diving as it is some of the best diving I have ever done, however the weather decided not to play along and so we ended up spending a couple of days chilling on the balcony overlooking the beach, shopping at the fantastic craft market (much better than anything we had seen previously on the trip) and eating more amazing prawns and fish.

We had spent nearly a week on the coast of Mozambique enjoying the beaches and seafood and relaxed atmosphere, so it was time for a change of pace! We headed south to Maputo, the capital of Mozambique. On the way we stopped at Inharrime, a tiny village renowned for its Piri Piri sauce. All along the main road as it passes through the village are stalls with old whiskey bottles filled with the fiery red sauce for which the village is famous. Throughout countries such as Mozambique and Malawi the roadsides are littered with stalls from which you can buy all manner of things, from fruit and vegetables to clay pots or reed mats. The stall owners really get a thrill when the truck pulls up and they see all the people in the back that they can haggle with!

Maputo is a lively city, with a heavy Western influence. We stayed in a backpackers in the city centre, and took the opportunity of being in a city to find a bar which was showing the rugby (haven’t ever watched the rugby in a bar while sitting next to a missionary before, but guess there is a first time for everything!) Maputo also has a wide range of restaurants and bars and we had a good meal out (although the food we had been cooking on the truck was so good that our standards were pretty high!) and then headed to a nice cocktail bar for a couple of drinks and a bit of people watching. Maputo was our last stop in Mozambique and also where we said goodbye to another of our group who had to fly back home to Mauritius. It was quite a shock to be in the big city after the small villages and deserted coastline, but a great place to spend a night.