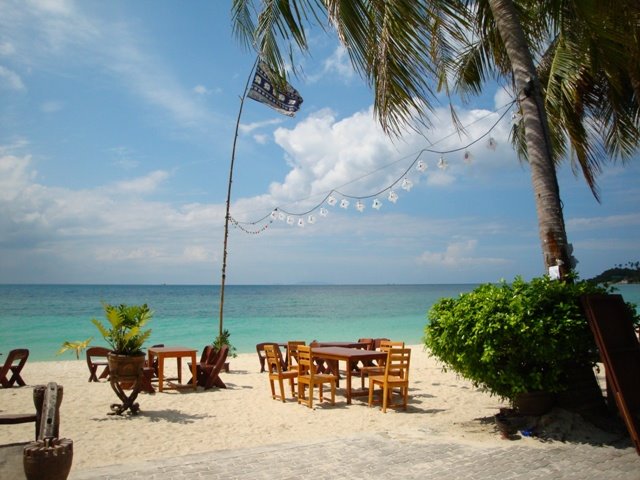 We left Cambodia in a couple of private mini vans and headed for the border. It would prove to be an eventful drive, as most of it was amidst chaotic road works, the road surface a mud bath with the relentless afternoon monsoon rains. Skidding in every direction, our highly skilled driver manoeuvred us closer and closer to the Thai border.

As soon as we crossed no man’s land and entered Thai territory, the change was remarkable, big four lane highways, street signs and traffic signals that worked, we were back into civilisation. We headed for Bangkok and Banglampu, the centre of the backpackers’ area.

On our first night it was Richards Birthday; a surprise party had been set up at his most favourite restaurant in the whole wide world, McDonald’s. No he was not turning six, but rather twenty four. Twenty four years of loving Ronald McDonald? Rich was all smiles as the special party treats arrived, lucky packets all round, and everybody wolfed down their food.

Next we headed off to watch a Ping Pong Show and then to Khao San Road, the backpacker’s party district of Bangkok. A good night was had by all, though some of the faces the next day didn’t look quite as perky.

After two nights in Bangkok we headed down to the Islands off the east coast. Because everybody has such a different idea of what beach time is all about, we chose to give folks the option of heading off and doing their own thing. Some were really keen on going down to the full moon party, a festival on the beach with tens of thousands in attendance. Others were more about some “ME” time and booked themselves into an expensive beach lodge for the week. Transport on and between the islands is easy and fairly cheap, and this makes for a great time to explore.

We, the Odyssey crew, based ourselves at a small lodge on the south east coast of Koh Pan Nang. Quite a few people decided to join us at this rustic set of bungalows, perched on the slopes of a small bay, offering breath taking views through the palm trees. The days were spent relaxing at the pool or strolling from one beach to another, exploring the coast. In the evenings, the stretch of the white sandy beach was dotted with restaurants, offering fresh fish as the speciality.

The best way to see and experience the islands is to hire a vehicle. A simple 100cc scooter can be hired for a couple of dollars a day, a 4×4 for a little bit more, and for those with very good travel insurance, high powered quad bikes can be taken into the central tropical island canopy.

After seven fun filled days, everybody regrouped to catch the ferry back to the mainland, with tales of beautiful white sandy beaches, rum cocktails, and sunburn. What more could you ask for from a beach holiday?