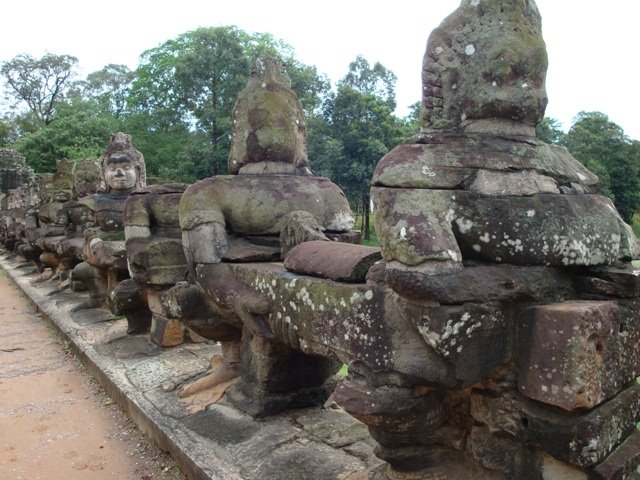 Almost instantly as we crossed the border from Vietnam into Cambodia we could see and feel the change. A little, grubbier, smellier, wilder, whether these were the result of pre conceived ideas with Cambodia’s very recent grisly history, I could not tell you. But we had definitely arrived in another country well worth exploring.

Phnom Penh, the Capital, is where we checked into a very friendly guest house in the centre of the tourist district. Everybody settled into their rooms and we headed down to the FCC or Foreign Correspondent Club, originally a bar, now a chain of restaurants, to house foreign journalists in times gone by , with its great food and breathtaking views we wined and dined the evening away while watching the shipping on the Tonle Sap River.

The next morning was set aside for a serious reality check. Anybody who has not read about Pol Pot and his merry men would struggle to believe that atrocities like this have happened within the last 30 years. A visit to the killing fields and Genocide museum, guided by a professional local guide, saw the entire group in shocked silence. It is such an important part of Cambodian history insofar as it is so real, that people fully involved in the carnage, are sharing the street, shop and bus with you. All subject to one man’s crazy ideals.After lunch the group divided into two factions those wanting some quiet time to reflect and those wanting to do a bit of venting. The Reflectors headed off to see the Royal Palace and Central Pagoda. Its beautiful gardens all surrounded by a high wall, hides the milling city and provides a few moments of calm to reflect on the day’s events.

The venter’s headed to the shooting range. Cambodia has had its fair number of wars in the past and given its recent history, everybody has decided living a peaceful democratic life is the way forward. But what does one do with all the armaments left from the strife… For a dollar a bullet you can shoot almost any kind of weapon you choose. I know it may seem wrong, but it’s better than leaving it all lying around until somebody gets the crazy notion of starting a war.

Off to Siem Reap, another Unesco World Heritage site, and another 45 seater luxury, private bus. We had tried hiring smaller coaches but the 26 seaters which were the next size down just didn’t have the luggage space. So we all piled into our private couch, two to a seat and headed off to some of the greatest ruins in the world.

En route we stopped for lunch, this happens most days and we have all become hardened to the fried rat and frog on a stick that is for sale at the road side stops. It took a few seconds to grasp what lovely morsels were on offer here, but the little girl with a giant spider slowly crawling up her shirt should have been a hint. Deep fried Tarantula, not a couple on a stick, but bowl after bowl of the fat hairy monsters. The shrieks were soul piercing, and that was from the men in the group. After a very diplomatic decision we all pilled back on the bus.

Siem Reap is not too much to shout about, as a small town surviving on tourism, it is well geared for the traveller, with all kinds of restaurants and bars punctuated with guest houses and hotels. The true magic of Siem Reap lies a few kilometres distant and we would be dedicating the whole of the next day to just scraping the surface.

Angkor Wat is definitely down on the list of things to see before you die, built in the 12th Century, it is the largest of a cluster of Wats (Temples), that surround the Siem Reap area.

We booked onto a full day tour leaving our hotel on the river at silly o clock (05:00), in a swarm of buzzing Tuk-Tuks, to catch the first light of dawn splash colour over the magnificent Angkor Wat ruins.