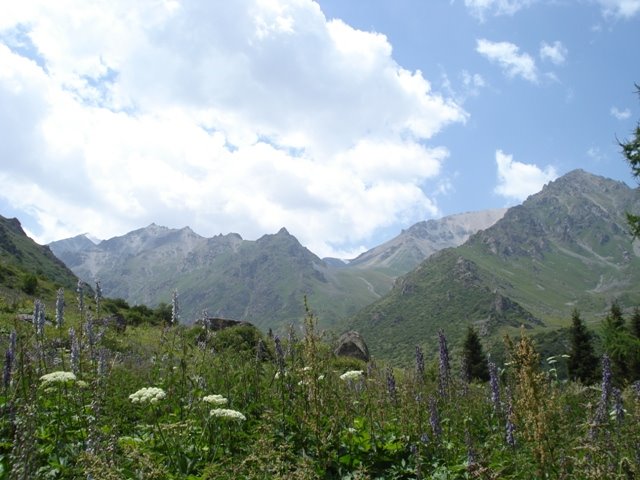 Next we were off to Al Archer.

We left at nine in the morning on a short drive to the mountains that dwarf Bishkek, slow going as the roads weren’t great we wound ourselves higher and higher into the hills, then the gorge that is Ala-Archa, rated as some of the best trekking in the world, most of the group were talking of the treks they had planned.

Ala-Archa offers several routes of varying difficulty, from a seven hour return trek up a gorge to a vantage point where you can view the glaciers, to a three day trek across the glaciers themselves. As we had three nights up in the gorge the group had split up, some wanting to do the biggy, others just wanting to enjoy the scenery.

The first group of trekkers were up before sunrise readying themselves with trekking tents and rations to last out the one night trek up to the glacier, they would be following the river, up the gorge for about 16km, zig zagging across the river.

Once the rest of the group were up and fed they set off on the lighter walk up a different gorge, a bit further down the mountain. This trekking is not quite as wild as some we had done, providing detailed maps and well demarcated paths.

But one chose to go walk about all alone and found trouble in bucket loads, I ask you, have you ever gotten drunk with an Olympic team? I certainly can’t say I have, but I know somebody who has. Young Mike T, with his lady friend away walking in the mountains, happened across the altitude training camp for the Mongolian woman’s and Kyrgyzstan men’s weight lifting teams. Obviously the contestants couldn’t drink as the Olympics’ were only weeks away, but the coaches, well that was a whole different story. It sounds like it was a crazy night with the end result, Mike, Gold for Ireland, and the rest not even seeing the podium.

The last night at Ala-Archa we had one of the Odyssey favourites, Moussaka , as everybody started to realise this would be the last night of cook group and wanted to muck in and help with the cooking. The next morning we had a proper fry with Bacon (not a common luxury in the Muslim world), fried eggs and hash browns, before packing up and heading down the mountain. In a rather moving seen everybody gave Penelope a group hug and had their last few photos of what has been our trusty truck and home away from home for so long.

Returning to Bishkek for the last time everybody felt more than at home having routed out all the best internet cafes and restaurants.

We had booked into a soviet style hotel with massive rooms, more suited to a family than a couple of overlanders, and soon the luggage was strewn around everywhere, as people sorted their clothes for their next adventure in India and Nepal.

Cher and I would be taking Penelope back to the UK over the next month, while the group travelled around India with Pete in the rented truck. It was a sad goodbye on the last morning in Bishkek, as the Odyssey group clambered into transport to take them to the airport, and Cher and I jumped into Penelope to head in the opposite direction.