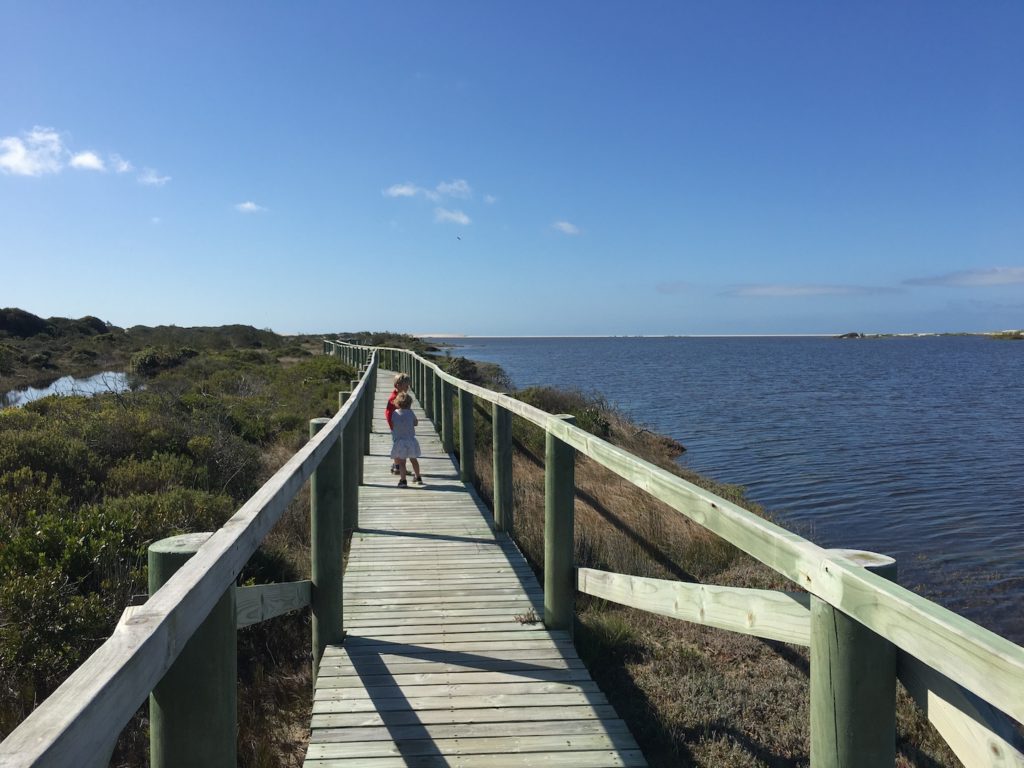 One benefit of lockdown has been that we have taken the time to explore our local area. And what gems we have discovered!

Although winter should be in full force at the moment, yesterday’s forecast was for blue skies and low 20’s temperatures, so that was enough for us to plan a day trip to De Mond Nature Reserve.

We set off after breakfast and took the tar road as far as the De Dam turnoff, then we hit the gravel roads. When we had visited Arniston and Struisbaai a few weeks ago the roads were in great condition, but after the recent rain they had become quite pot-holey. Nothing that required 4×4 but definitely slowed us down a bit but fortunately we managed to spot a couple rheebok and a grysbok or two along the way, along with plenty of ostrich and other birds to keep the kids entertained.

Depending on the lockdown level, you may need to book in advance for all Cape Nature reserves, the process is easy enough and we have found it only takes about 10 minutes for the confirmation letter to come through, showing it on your phone was enough for us to secure entry to De Mond although we found it less stressful to book before we left home as sometimes the confirmation letter ends up in spam.

After signing in we headed off, map in hand. Now I must admit to being pretty proud of my ability to read road maps, but trail and park maps are quite a different thing and yet again the map that we were given of De Mond led me astray.

We headed off confidently from the office and saw a boardwalk alongside the river and started walking along it… and after about 300m discovered it was in fact not part of the Sterna Trail that we were going to hike, but instead it disappeared into the flooded river and would have taken us to Arniston instead.

We stood at the end of the boardwalk and looked around, trying to give the impression that of course this is where we meant to go, just to look at the fishermen in the shallows just beyond, and then swiftly turned on our heels and returned along the boardwalk…

Ah, the bridge across the river, probably a better option (and in fact if the map had been given more than a glance it would have been obvious). After crossing the bridge we turned right and found the first sign for the Sterna Trail and we started on our 6.7km (ish) walk.

The Trail is well defined and starts off alongside the river, and then heads into the fynbos and dunes before taking you to the coast in the middle of the spectacular beach that runs from Struisbaai to Arniston. After walking along the beach the trail turns inland again returning you to the office. Or would do if it we hadn’t had so much rain recently, but more on that later.

Walking through the fynbos at this time of year is beautiful, the flowers on display were stunning. The trail was easy walking, a few mole hills and porcupine holes made it a bit treacherous for our youngest hiker at some stages, but nothing that mummy’s hand and a jump and a leap here and there couldn’t fix.

As we neared the coast we could hear the waves and the dunes started rising in front of us. It was all easy walking and as we reached the top of the last dune we were rewarded with the most amazing view of this stunning coast.

We stopped for lunch here and while the kids ran up and down the dunes we sorted out some sandwiches and chatted about the beautiful places that we have visited both close to home and on foreign turf, and how many more beautiful places there are to visit!

After lunch we started our walk along the beach and fortunately our timing for the tides was spot on making walking on the sand much easier. The shells we found along the way were fascinating, and Mr S so enjoyed chasing a rolling sponge along the way. It’s always amazing how the simplest things can keep the kids entertained for ages, and in many ways it’s a lovely lesson to remember to enjoy the simple things in life.

As we wandered along the beach we saw the remains of the De Maggie, a wooden shipwreck from 1872. There were a few fishermen standing here trying their luck in the Atlantic waves, and we should have perhaps asked for directions… ah but hindsight is a wonderful thing. Instead we carried on to where we thought the trail would start again, and sure enough we saw a sign for the Sterna Trail and we left the beach and turned inland.

De Mond Nature Reserve is centered around the mouth of the Heuningsnesrivier (literally the Honey Nest River”). With the rain that we have received this year, many of the estuaries along the coast have breached into the sea, and while the Heuningsnes River hasn’t breached, it has certainly risen substantially and as a result parts of the Sterna Trail have been submerged. A fact we didn’t realise until after we had tried to follow the trail signs.

At first it was all going well and the kids enjoyed a bit of playing on the edge of the river while we relaxed in the sun. Then we decided to start heading back, and although we could see where we wanted to get to, we just couldn’t get there without wading across the river of unknown depth. Maybe ok if it was just us, but with a 3yo and a 5yo in tow we preferred to try to find a dry way home. After a little discussion about the best way (the ridge line avoid the swampy bits) we headed off.

After a fair bit of bush-bashing and ups and downs, a few scratched shins but no permanent damage, we managed to find our way back to a different rail… where we found the fishermen we mentioned earlier walking back to the reserve office. Ah, we saw you walking past and thought we should have told you about the way back as there was a couple who got lost there a couple of weeks ago they said. Ah yes, that probably would have been helpful we said.

The trail led us to the boardwalk which returned us easily to the starting point of the trail, and to a lovely viewpoint up a flight of stairs that was definitely worth the effort. De Mond Nature Reserve was a lovely day out and one we would thoroughly recommend to other families looking for a day trip from Gansbaai.