Journey to the edge of civilisation (and beyond) 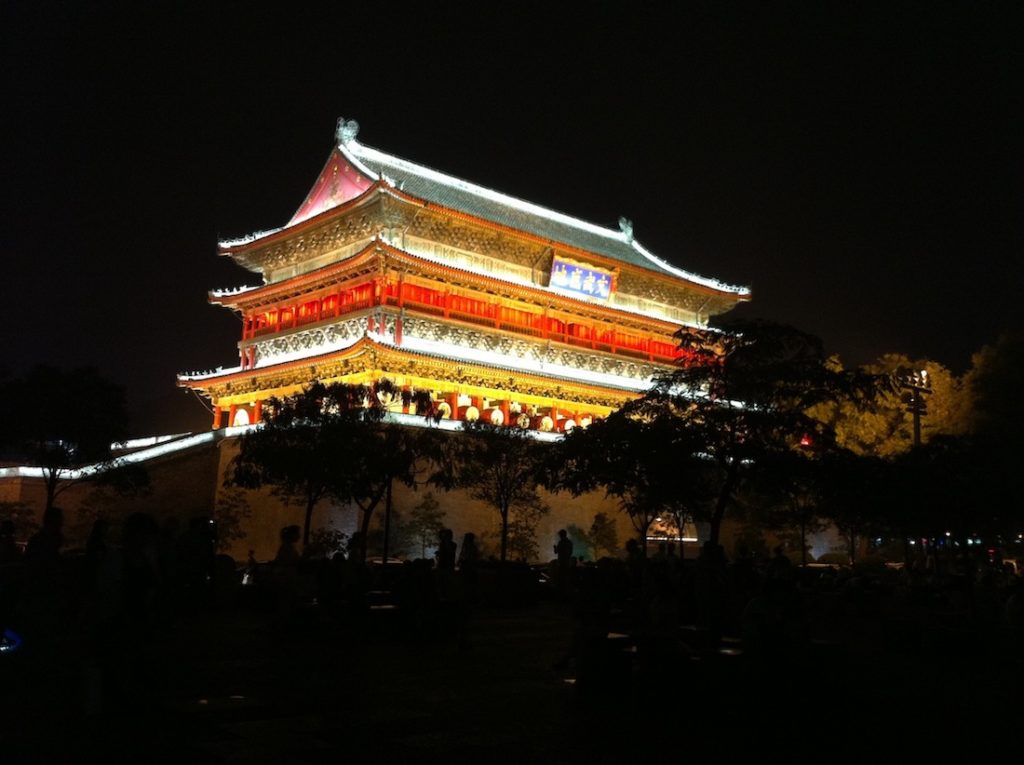 Xi’an.  What a great city!  Putting to one side briefly the incredible Terracotta Warriors which have made this one of China’s most internationally well-known cities, the city has a fantastic vibe, great sights and markets and is a very easy place to spend a couple of days exploring.   Xi’an marks the official start of the Silk Road, an ancient trading route that we will be following on our journey west.  It was more than goods that flowed along its many paths for thousands of years – ideas, religions, technologies – all of these were shared along the Silk Road as well.  In Xi’an you can enjoy fantastic (and cheap!) food in the Muslim Quarter, where dumplings, noodles, mutton stew, meat skewers and even peanut brittle are all made in street side stalls and small simple restaurants.  The energy in the market is incredible, and as the vendors aren’t pushy at all, wandering the streets and stalls can be done at leisure.

Of course a visit to the Terracotta Warriors is a must-do!

Lanzhou was our next stop, mainly a transit point, but it does have a fantastic night market.  Everything from skewers of chicken wings, lamb or calamari; hot pots with vegetables and noodles; goats heads and innards; and an amazing array of live seafood (amazing given that Lanzhou is the “bulls eye” of China, right in the middle!).  A few of the group braved the seafood with no ill effects, enjoying a delicious stir-fry of razor clams and spring onions, others stuck to the Chinese hamburgers and chips, familiar yet definitely locally spiced, and a big hit.

To the mountains we go, our destination the Tibetan enclave of Xiahe (pronounced something similar to “shark-her”).  Our hotel was agreed to have the best beds in China so far (Chinese beds do tend to be a little on the firm side!), the local ladies on the corner had the best bread in China, and the nearby Snowy Mountain Café was a popular favourite with its yak pizza and yak biryani, as well as copious quantities of red wine.  Even a power failure did little to dampen spirits when the Great Wall Dry Red kept flowing.

The Labrang Monastery is a wonderful, spiritual place to wander, with stunning decoration, and devout pilgrims and monks walking the kora, the route around the monastery, spinning the prayer wheels.  A beautiful spot, and we enjoyed beautiful clear blue skies during our stay, encouraging many to wander off into the hills on foot or on bike.

Lyn, Bev, Pam and Mandy took advantage of the glorious weather conditions and took a taxi ride out to the Sangke Grasslands in the hope of seeing some wildlife.  In their words: ”Pam negotiated a horse ride with a local woman for herself (the rest of us declined) and we were taken to her abode, and treated to a bowl of sweetened yak yoghurt, before she allowed us to visit her yaks in the paddock. While waiting for the taxi to return, we looked through the local stalls, buying yak tooth necklets, and bracelets. On the return journey, we stopped beside the road, and bargained with a local selling honey. With bees flying overhead Pam haggled, but was only able to save 10 yuan, coming away with a bottle of fresh honey to be consumed at our bush camps! The taxi driver was very accommodating, and willingly stopped for camera shots along the way. In all, it was a magic, unforgettable, and enjoyable experience – one that will be treasured!”One of the joys of overlanding is the places and people you see in between the destinations.

Driving through the villages surrounding the Lijuiaxia Dam was one of these experiences, glimpses into a lifestyle so very different from our own.  As the weather gets cooler we are seeing families preparing for the winter months, stockpiling wood and grains, harvesting crops and tending to their sheep.  Living simply, with none of the luxuries we take for granted. We were here to visit the Bingling Si grottoes, renowned for their Buddhist art dating back for centuries, and in more recent times, for the incredibly friendly monk, the last remaining attendant at the monastery high up the valley.  While still impressive, compared with the art work we had seen at the Yungang Grottoes (and that which we would later see at the Mogao Grottoes outside Dunhuang), the colours had faded more, and time and environment had damaged the carvings and frescoes to a greater extent.  However, the boat trip to the caves, and the ride up to valley in small carts (that appeared completely unsuitable for the terrain, yet handled it with ease) make this a fantastic experience in its own right.  Stunning scenery during the drive, and then a lovely peaceful monastery presided over by the most charming monk, it was a privilege to visit him.

Our first bushcamp – a momentous moment for any overland expedition, and one for which the crew particularly pray for good weather!  And happy days, that’s exactly what we got!  Sunny skies, a starry night, and a campfire, accompanied by a yak stew and Frank on the guitar, it was a lovely start to our bushcamping experiences on this journey west, and left everyone keen for more.

A brief stop in Zhangye where a visit to the Giant Buddha left even Pat impressed, and then we headed for the edge of civilisation.  Well, at least that’s what it was considered to be in times of old, with only “savages” further west.  We visited the fort, which has an excellent Great Wall museum.  A short distance from the fort we drove through a gap in the wall, and set up camp with views over the “overhanging” great wall in the distance.  Another lovely meal (BBQ pork steaks with oyster mushrooms), a campfire and more singing from Frank and a bit of star gazing, another lovely bushcamp.

And so the next day we found ourselves leaving Kirsten behind for a day (to get visa extensions) and going beyond the edge of civilisation…  and what we found was really quite civilised – the city of Dunhuang – although, our journey wasn’t all that civilised, with first a dust storm and then a rain storm (in the desert!).  After arriving, we headed to the night market, disappointed to find that the dumpling man’s stall was closed, although the Chinese hamburger man must have been delighted with the situation as he definitely came out a winner!

On our second day in Dunhuang, with Kirsten safely returned (and very grateful for the truck having travelled across to Dunhuang by bus), we headed to the Mogao Grottoes which impressed with their stunning Buddhist artwork and carvings (sorry, no photos allowed inside!).  Pam was particularly pleased to be able to celebrate her birthday with a visit to the caves, and we all enjoyed a very Chinese birthday cake.  Pam generously put some money behind the bar at the café in the courtyard of the hotel, and there was much merriment!  Rob even got dressed up for the occasion in partial disguise which later thrilled the ladies at the night market while he snacked on a poor sheep’s appendage…

China is a huge country.  Really, really big.  And never is that demonstrated more clearly than in the journey from Dunhuang to Kashgar via Turpan.  There have been huge improvements in the road in recent years which has reduced our drive times substantially, by days even.  But there is still a big distance to cover with not a huge amount to see along the way.  There is some amazing scenery as you come out of Turpan, and the roads themselves are interesting for the driving techniques and incredible loads that are transported by road, but generally these days are best spent reading, playing cards, blogging, sorting through photos, or perhaps snoozing.  And of course being grateful that we are able to do it in a couple of days in the comfort of Penelope, rather than several weeks on the back of a camel!

Our major stop off on this drive is the city of Turpan, another oasis city thanks to the karez underground irrigation canals that bring water from the Tian Shan mountains.  It was an important stop on the Silk Road, and the Jaiohe city ruins evidence the population that used to live here.  We visited the ruins, and also the karez – being a holiday weekend, the sights were busy to say the least, just getting out of the carpark took a bit of pushing and a whole lot of patience!

It wasn’t all ancient ruins and history, we also enjoyed dinner in the vibrant night market (the vegetarian pancakes were a particular hit), and an afternoon of wine tasting and snacks with our friends from Dragoman who were staying at the same hotel.

From Turpan we headed back into the Taklamakan Desert, and then, hey presto, we were in Kashgar.  Our last stop in China, we could clearly see a huge change in clothing, food and culture that signal our entrance into Central Asia.  With a couple of days to explore, visits to the Id Kah mosque, Sunday Market (despite the name, it is open every day) and the streets of the old town were all on the agenda, with some very keen to purchase some carpets and ceremonial knives to add to already bulging bags.And there we have it.  After 30 days and 6,500km of exploration and adventure in China, it is time for us to say goodbye to Sophie, our local guide and to cross the Torugart Pass and head to (literally) pastures new in Kyrgyzstan.  How to summarise our time in China?  Well, that might be need a whole blog to itself!