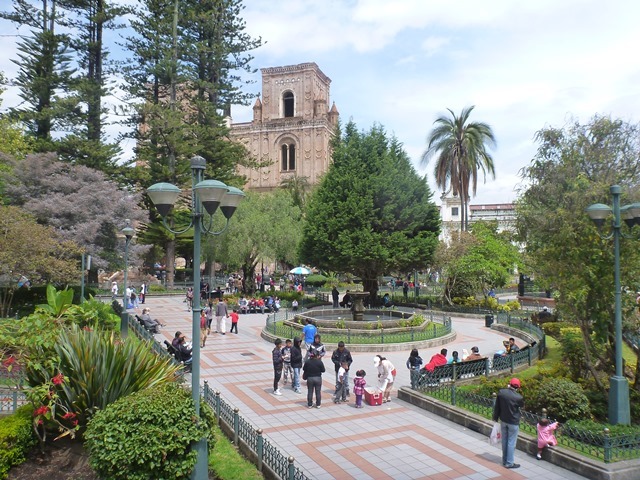 Our border crossing from Colombia to Ecuador was all going well until someone uttered those fateful words… “This is going to be the quickest border ever!”  As the last couple of the group handed over their passports there was a commotion, and the passports disappeared into the back office.  There began the waiting…  It turns out that the Ecuadorian record keeping systems are a little problematic, and the sticking point became that they had no record of Karen leaving Ecuador after her last visit 8 years ago.  They also had no record of Steve either entering or leaving Ecuador, but that didn’t seem to be a problem, the issue was that Karen had apparently overstayed her visa by 8 years which made her persona non grata as far as the authorities were concerned!  With the immigration team not budging, Pete took the rest of the group in the truck to Otavalo while Kirsten stayed with Karen and Steve to sort out the mess that was none of Karen’s doing, but firmly her problem as far as Ecuador were concerned!  It was a long day of hurry up and wait, and involved multiple phone calls to and from the British embassy, a stealth mission back into Colombia to visit the Ecuadorian embassy (and have lunch, so it wasn’t all bad!), a phone call to Karen and Steve’s neighbour and a bit of rudimentary lock breaking in search of expired passports back in England and then, finally, just as hope was beginning to fade, the wonderful sound of an entry stamp going into Karen’s passport!  A couple of hours in a taxi took us to a very happy reunion with the group in chilly Otavalo.

Otavalo is best known for its market of local handicrafts which saw some of the group parting with a bit of money, but there are also some lovely churches and squares to wander around.  We were staying at a great campsite just out of town which gave us stunning views over the snow capped mountains and volcanoes surrounding us, and many took advantage to go for a walk through the hills immediately around the campsite or just to chill in the hammocks around the campsite.

With the group splitting up in Quito to do Galapagos trips, Otavalo was were we had a combined birthday party for Mikkel, Colin & Dunc which also doubled as a farewell party for Dunc and Ange who were due to fly back to Australia after being on the road for 9 1/2 months.  A lovely dinner, a speech from Tony, a slide show from Steve, a great rendition of “leaving on a jet plane” from Mikkel and Ange’s famous banoffee pie, and then most of the group retired to the library to continue the farewell celebrations..  Of course, no farewell to Dunc would be complete without his signature Gangnam Style moves, this time supported by some fantastic backing dancers!  A video does exist, but it is sadly too big to upload… or at least that’s my excuse…

A couple of fuzzy heads greeted the truck the next morning as we continued our journey south, heading for the capital of Ecuador, Quito. Enroute we stopped off at the self-proclaimed “centre of the world”, crossing the Equator (a couple of times!) in search of a worthy monument to celebrate our return to the southern hemisphere.

With a lovely Old Town to explore, there is plenty to keep you busy in Quito for a couple of days, but for most of the group Quito had long been looked-forward to as the base for their trip to the Galápagos Islands.  Their trip was an amazing experience and was worthy of a blog on its own, just to showcase some of the fantastic photos they took, if you haven’t already read it, click here to have a look.

So for those of us who remained behind, in a way Quito was a bit of a holiday within a holiday, a time to explore the city including the cable car up to 4,100m, but also to feast on buffet breakfasts or $2 set lunches, catch up on phone calls home, emails, personal admin, washing and even bit of sleep.  But first we had to farewell Dunc and Ange the night before they flew home via Santiago.  As our leading connoisseurs of fine food and wine, there was only one choice for their farewell dinner venue – the city’s top restaurant, Zazu. It was a fantastic meal, fancy food and fine wines – a real treat for everyone who went along!  Almost as impressive as the food were the 6foot tall rose stems!  Who said overlanding meant roughing it?

As we said farewell to Dunc and Ange, we welcomed Rogan who you may have seen in previous blogs as he has done several Cape to Cairo expeditions for us as well as last year’s London to Australia.  Rogan will be taking over from Pete from Lima onwards when Pete returns to the UK to run another Odyssey expedition from Istanbul to Beijing.

Reunited with our happy and exhausted Galapagos visitors, we all loaded up for the drive to Banos.  Continuing to drive through the Andes means some pretty slow journeys, but the scenery more than makes up for it.  We stopped for lunch opposite a waterfall at the base of a cable car (of sorts) which stretched across the gorge – an exciting and random addition to lunchtime!

Banos and the surrounding area is home to volcanoes, rivers, waterfalls and thermal springs (and roads through tunnels, giving Pete the chance to use the newly fitted air-horn to great effect).  Heather, Terry, Lesley, Francois, Lisa and Geoff headed off to do some extreme rafting through Grade 5 rapids, while others embarked upon some extreme pampering with massages, facials and pedicures being the order of the day.  Our campsite was another lovely spot, flat and grassy with hummingbirds, hammocks, a lovely covered eating/bar/kitchen/games area and friendly former overlanders as our hospitable hosts.  And a well-stocked beer fridge which Ken in particular saw as a personal challenge!

We celebrated Steve’s birthday here on our second night, the oven in the kitchen gave Karen the chance to bake some macaroons and chocolate crackles which went down a treat for dessert.  The rum punch was also a hit, although less so the next morning when Steve felt he had been rum punched!

A relatively early start the next day and we headed south through the mountains and rain toward Cuenca.  You may not have heard of Cuenca, but you will have heard of its most famous export, the mis-named Panama Hat, known locally as a sombrero de paja toquilla (toquilla-straw hat) or the slightly more exotic, Montecristi, named after the most famous hat-making town.  The accidental discovery of a microbrewery had a significant impact on some of the group – obviously what goes on tour stays on tour, but let’s just say, Tony won’t look at a servery hatch in quite the same way again…

Pottery, churches, markets, museums and lovely white-washed buildings, as well as a great Thai restaurant, kept us all busy for our time in Cuenca, and we all managed to get through without buying a hat!  Perhaps it was the price tags (a good one can set you back a couple of hundred dollars), or just the fact that white hats and overlanding definitely don’t mix (or for that matter, any white clothing!)

Given our extended experience at the border into Ecuador, we had high hopes that our exit into Peru would be a lot smoother – but alas, the Ecuador record-keeping system struck again!  This time the issue was that 6 of our group had apparently been recorded in the “system” as entering at a different border from that which was stamped in their passport.  No amount of appeals to logic were helping, so instead Pete headed back a couple of kilometres to plead our case with the head of Ecuador immigration at their nearby office, and after only a small delay of an hour and a half or so, we were all allowed out of Ecuador and we entered Peru, country number 7 (or 8 for those who went across to Paraguay) on this epic expedition.  The last couple of weeks have just flown by, and it is hard to believe that we only have a few weeks left.  But with so much to do in that time, there is no time to dwell on the end of the journey, only to enjoy the amazing experiences that still await us in Peru, Bolivia, Argentina and Uruguay.