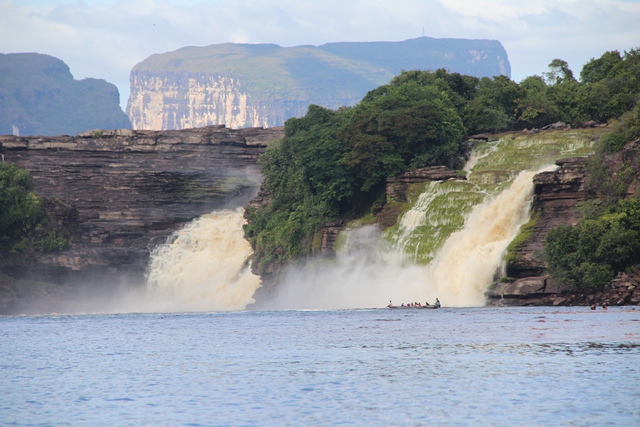 Our arrival into Venezuela coincided with a very interesting time in the country’s history, coming only days after the death of President Chavez.  In response to his death, the government imposed a week-long period of mourning (although as with all things in Venezuela, time is a relative concept and it lasted slightly longer than a week) which saw schools close and a prohibition placed on the sale and consumption of alcohol.  We had been a little concerned that there may be some destabilisation caused by the death of their iconic leader, however all remained calm during our time in Venezuela and we were free to enjoy the wonders of this fantastic country.

Crossing into Venezuela saw us experience our lengthiest border crossing to date – thanks to lunchtime closures, computer crashes and a half hour time difference from Brazil which all conspired against us, it took us about 4 hours to clear the border (not bad for Central Asia, but a bit of a surprise after our other border crossings to date in South America!).  On a positive note, the ice cream seller at the border was pretty much the happiest man on earth thanks to our insatiable appetite for cornettos and ice lollies!

Finally clear of border formalities, we could immediately see a difference in the landscape – palm trees, flat-topped tepui mountains and grassy plains.  It was stunning countryside to drive through, and even better countryside to camp in when we found a fantastic bushcamp overlooking Roraima, the area’s most famous peak.  As night fell we enjoyed our first truck meal for a while, and had a quick competition to guess the number of kilometres driven in Brazil – Robin was the victor guessing 11,000+ (the answer was 11,331), Duncan kindly offered to do a special “gangnam” performance as the prize, not too many of us were surprised when Robin graciously declined!  We all headed to bed early, a bit shocked at being cold for the first time since Chile, courtesy of the thousand metres or so we had climbed since leaving Manaus.

The chance of seeing sunrise over Roraima was enough incentive to get most of us out of bed early the next morning, and while the sun never really played along by shining on the rocks as we had hoped, there is still something very special about watching the sun rise, and watching and listening to the world awake.

After breakfast we headed down the road to our first stop for the day, Quebrada Jaspe, a waterfall which cascades over the red Jasper rocks which give their name to the waterfall.  It was a refreshing start to the day for those brave enough to stand under the water!

Continuing on we stopped briefly at another waterfall where you could swim in the beer coloured water, immersing yourself as much as possible to avoid the rampant sandflies!

Our final waterfall for the day didn’t involve any swimming, but was a spectacular sight as the water fell over 50 metres into the river below.  Being Venezuela, “health and safety” is a foreign concept, so Francois braved the walk across the top of the waterfall while the rest of us looked on in awe / horror before retreating to the souvenir shop for some retail therapy.

At our peak we reached over 1,300m above sea level, and then as we ran along the Guyana border we descended over a thousand metres down an escarpment through thick jungle and cloud forest.  Running along the flats for a while we reached our riverside campsite and set up our tents amongst a menagerie which included a macaw (quite friendly), a monkey (not friendly), a Rottweiler who was very fond of the sound of his own bark during the night, several cockerels (they don’t just cock-a-doodle-do at dawn, no matter what anyone says!), guinea fowl and a cat or two.

Earlier in the day, the normally impeccably clean Mikkel had ended up with his trousers covered in mud thanks to Pete.  Revenge was to be sweet due to a small snippet of information Kirsten had accidentally shared earlier in the trip – that Pete was none to fond of spiders.  And so Mikkel ventured off in the campsite and returned with a huge tarantula which he managed to surprise Pete with, causing him to levitate somewhat!  Lesson learned: Don’t mess with The Dane!

It was a short drive to Ciudad Bolivar, our base for heading to the world’s tallest waterfall, Angel Falls.  Our lovely campsite with a pool, bar and shady grassy campsites was almost enough to tempt people to stay behind, but the lure of the falls was too much and so the next morning we headed off early for a flight to the small village of Canaima.  The flight offered stunning scenery over the jungle and lakes of central Venezuela and a lovely view of the Canaima lagoon which we explored further once we had landed.  For those keen for a walk, it was possible to get to the top of the waterfalls which cascade into the lagoon, for others, escaping the heat by bobbing around in the lagoon itself was the perfect way to cool down before lunch.

At the same time, Steve, Karen, Duncan and Angela took a “more exciting than we expected” boat ride further up the river which involved some rapids and portaging of the boat.

The next morning, after a leisurely start it was time to board our small 5-6 seater planes out to see Angel Falls.  For some it was their first experience of small planes, and in many cases the flight across the dense jungle and in between sheer cliffs of the surrounding mountains was a highlight.  But for all of us it was the chance to see something quite special – the world’s tallest waterfall.  At over 900m tall, and being low water level at the moment (although we had been travelling through Brazil during the wet season, we had hit the end of the dry season in Venezuela), the water mists before it hits the ground, a strange sight in itself as the water seemingly disappears.  Our pilots swooped and banked to give us the chance to see the falls and take the photos we wanted, and then it was time to return to Canaima, just in the nick of time for some whose stomachs hadn’t taken to the bouncy, bumpy ride!

A rather hot flight home for most of us in a plane with no air-conditioning, and then it was time to leave Ciudad Bolivar behind and hit the road again, heading north towards the Caribbean coast.