The end of the world (as the Argentinian’s know it) 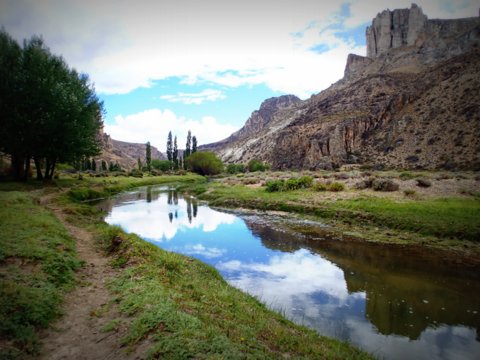 Our arrival in Ushuaia, the southernmost city in Argentina, and the self-proclaimed “end of the world” (although the Chileans claim Puerto Williams as the southernmost town in the world), coincided with a city-wide protest which made driving into the centre of town quite interesting with plenty of streets blocked off by parked trucks, but a bit of tricky manoeuvring and we managed it! Ushuaia is the gateway to the Tierra del Fuego National Park with plenty of walks available, or for steam train fanatics, the opportunity to catch the southernmost steam train in the world into the park.  For those keen to see another glacier, there is a chairlift up to the Martial Glacier, or you can cover the ground in a couple of hour walk as Anthony did.

Ushuaia was also where we welcomed Francois back after he had to return to France for a couple of days, few can claim to have a personal airport transfer in a huge blue and orange truck!

Being a port town and the gateway to Antarctica, there are an almost endless number of boat trips available, from a couple of hours to multiple-week Antarctic cruises. Many of the group cruised or sailed out into the Beagle Channel to see Sea Lions, cormorants and frigate birds, while Mikkel took the plunge and booked onto an Antarctic cruise for 10 days. He will be rejoining us in Mendoza and we are looking forward to his return and his stories and photos!

From the southernmost point of our expedition, the only way is north (well, for now, anyway). And so we returned briefly to Chile (where it always seems to be chilly, and even snowed on us this time!) and back across the Magellan Straits.  After a long queue to board the ferry (the waves crashing over the bow and the alarming sway of the car carrier next to us gave some indication as to why there was a delay!) we were pleased to find a bushcamp close to the ferry port.  As it was Francois’ first bushcamp it seemed only fitting that the weather closely resembled that of our first bushcamp, with howling cold winds and driving rain, although unfortunately the sun didn’t make an appearance at all this time!  A quick dinner on the truck and everyone headed to bed for a noisy night under canvas.  The next morning saw us do our first bit of sandmatting for the trip as the rain had waterlogged the ground, all a bit of fun on a wet, cold morning.

A day of driving took us to a rather unusual bushcamp in the middle of a town where we cooked up a lovely steak meal, enjoying some of the great Argentinian produce available.

Our destination the following day was an estancia (farm / ranch) near the UNESCO World Heritage listed Cueva de los Manos (Cave of Hands).  Pete was warmly welcomed back by the owner of the campsite, and we were immediately ushered into the cooking hut where there was a huge parrilla (grill) and a fireplace in the corner.  That was all the incentive Pete needed to put on a lamb feast, with some of the group claiming it to be the best lamb they had ever eaten!

From the estancia, there are two ways to get to the caves – you can stay on the truck and get driven across some fairly rough roads, or you can hike for 4-5 hours through the Rio Pinturas canyon, which 14 of us did.  It was a stunning walk, the first couple of hours through endless rolling grasslands and the second half of the hike saw us descend steeply down into the canyon and walk along the lush green valley on the river’s edge.  Our relief at seeing the truck at the end of the hike was only slightly tempered by the fact that we were in the bottom of the valley and the truck was alarmingly high up above us at the entrance to the caves!

A guided tour of the caves gave us all the chance to put some context to the hundreds of hand stencils and paintings that decorate the caves and date back up to 9,500 years ago.  The hand stencils for which the site is most famous were done using a variety of techniques including a form of spray painting where the dyes were blown onto the hand and the rock.  Over 90% of the hands are left hands which reflects the predominantly right-hand nature of the tribesman, but there are also one (or two depending on who you ask) of the hands that shows 6-fingers.  In addition to the hands there are paintings of local animals, including guanacos and rheas, as well as spirit figures.

After our tour we headed off in the truck down, and then up, some of the steepest roads we have ever experienced!  Sadly the photo doesn’t show just how steep it was, but our 310 horsepower truck + first gear + differential lock was required to get up the hill!

From the caves we headed to Perito Mereno (the town, not to be confused with the glacier of the same name that we had seen while in El Calafate) where we had another great dinner; although debate raged as to whether the potatoes served were chips or wedges, all agreed they were delicious and a great accompaniment to the hamburgers we made.

An early start the next morning, Christmas Eve, saw us heading to the town of Esquel (for some last minute Christmas shopping) and the nearby Parque Nacional los Alerces where we celebrated Christmas, but more about that to come in the next instalment!