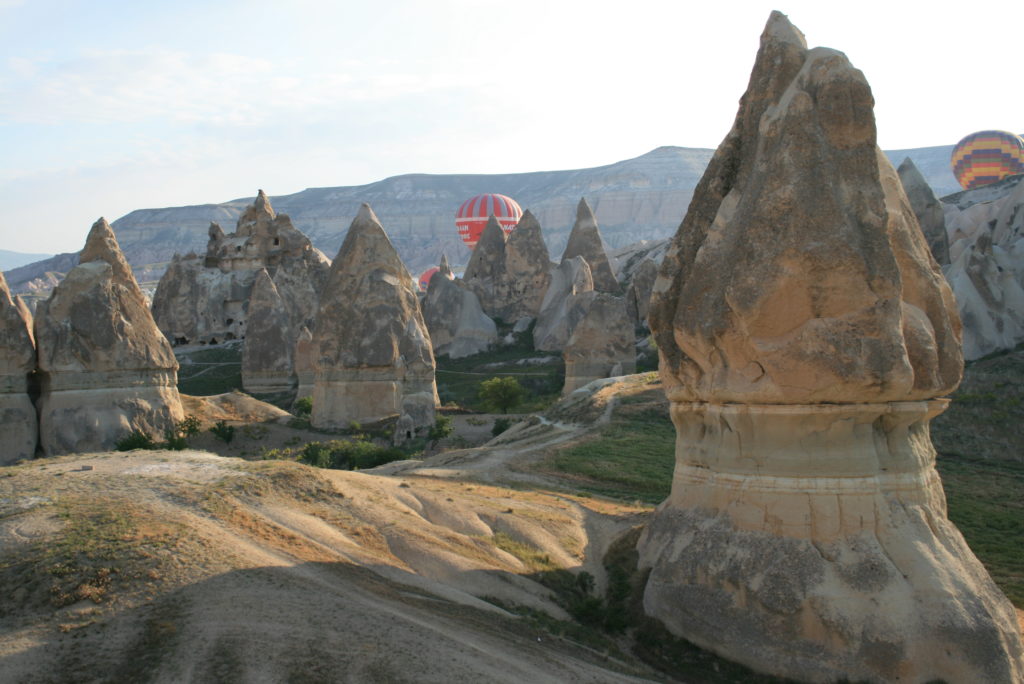 Crossing from Bulgaria to Turkey is always a bit of an adventure as the customs staff don’t really know what to classify us as – truck, or bus.  We had all the paperwork that we required, we just needed someone in Ankara to give the border guards a number to write into Pete’s passport which would show the authorisation for Calypso to enter Turkey.  Unfortunately Ankara’s computer system went down…  and the waiting began…  Fortunately we were entertained by the rally cars doing a two week race from Austria to Jordan – after we got chatting to a couple of the guys who were having their own challenges getting across the border we Odyssey-ed their cars with our new stickers, and even signed one of the cars.

6 hours later…  we were in!  The customs guards took pity on us and decided that we had been at the border for long enough and they didn’t want to search us, and then we had the final 4 hour drive into Istanbul.

Istanbul’s historical significance is unquestionable – as the crossroads between Europe and Asia it has been the centre of empires and religions, and continues to be a fascinating melting pot of the two very different cultures.  The Blue Mosque, Hagia Sophia, Basilica Cisterns and Topkapi Palace were highlights for those who had not visited before, and boat trips up the Bosphorous, fish sandwiches by the Galata Bridge and exploring the streets on the other side of the Golden Horn were enjoyed by those who had visited before.

Istanbul has an official population of around 7 million people, but the actual population is far higher and the city is sprawled over a vast area.  Dividing the two sides and continents is the Bosphorous and as we crossed over into Asia with a toot of the horn, there was excitement amongst everyone on board and the feeling that now the journey into the unknown was really starting!

After the hectic tourist town of Istanbul, our next stop in Turkey was Akcakoca, a small town on the Black Sea coast of Turkey.  As we drove through, we felt like celebrities as it seemed like the whole town was standing on the street watching open-mouthed as we drove past.  A popular resort town for Turkish people, they don’t see the likes of us very often, and we can be sure the town is still talking about the big blue truck now.  Our two nights in Akcakoca give everyone a chance to relax in the sun, and enjoy an amazing view from their tents…

Leaving the Black Sea (well, for now anyway, we will be returning to it’s shores again later in Turkey, and in Georgia), we wound our way down to Goreme, in the Cappadocia Region of Turkey.  Many people have seen images of the amazing rock formations, however seeing them from a hot air balloon, or hearing a local guide explain how the formations occurred and what it was like to live in one of the underground cities that dot the area gave a whole new perspective.  The underground city was particularly interesting as we tried to imagine 7,000 people living in a system of caves up to 6 levels below the ground, together with their livestock…the general consensus was that we were glad the smell no longer remained!

Our final stop in Turkey before crossing into Georgia is Sumela, famous for its monastery clinging high to the hills.  It is a long drive from Goreme, so we spent two nights bushcamping along the way, and the first bushcamp was high on a mountain pass at 2,200m – not high compared with where we will be going, but as the fog rolled over the peak and the temperature plummeted it was such a contrast from earlier that day when we had been wandering around town wearing t-shirts.  We have been blessed with amazing weather so far on the journey and the next morning was no exception as we woke up to a gorgeous sunny day, not a cloud in the sky or a breath of wind, and surrounded by hills and mountains.  Most of the group headed off to explore the nearby hills, whether embarking on a 2.5 hour hike to the top of a 2,900m peak, or just having a bit of a wander on the more gentle slopes.

From the mountain pass we wound our way down towards the Black Sea again, stopping off in another bushcamp in a picnic area – Omar, the grandson of the owner, was delighted to see us back again as he remembered us helping him with his English homework on the expedition in 2008, although it as hard to recognise him as he has grown about 2 feet since then!

Tomorrow is our first former Soviet state border crossing as we head into Georgia, the home of wine (well, so they claim), and of Georgian hospitality…  everyone should expect to leave again about 2 stone heavier!